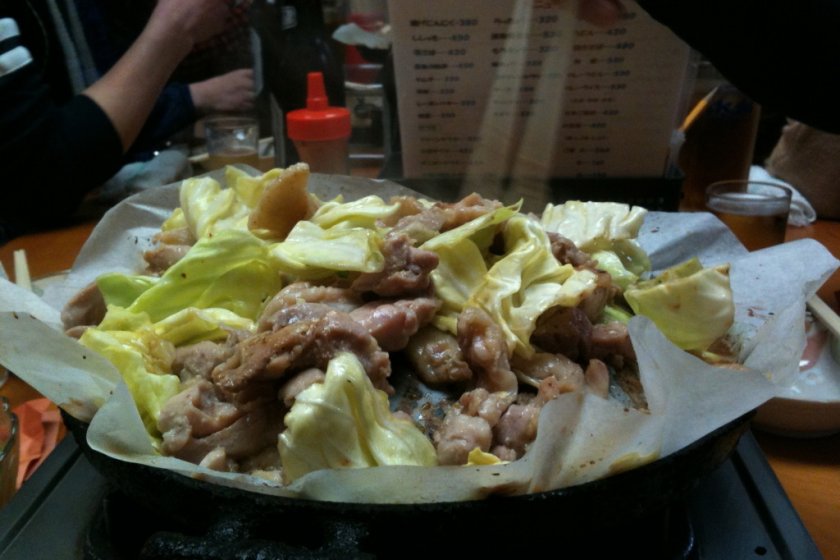 There is something wonderful about exploring local food in rural communities. Each region and town has its own local comfort food. For the Southern Hida and Northern Tono regions, it is keichan and one of the more popular places in Nakatsugawa city to have keichan is Kozato.

Taking the winding road up toward Otome Keikoku, Kozato is on the left inside what seems like someone’s home. In fact that, Kozato is located on the first floor of a family home which just adds to the comfort food feeling. Open the sliding door “garagaragara” and I was greeted by the staff. A few older local men were sitting at the bar drinking, eating and watching a baseball game. There are only nine low kotatsu-like tables (in winter they even get blankets) with gas stoves their center and on weekends it can become very busy so get there early or reserve in advance.

Everything is ordered based on the number of people at the table; we were five. Since we went for keichan we just said “keichan”, green salad and then ordered drinks. The drink menu consists of beer, whiskey, various fruit alcohols, orange juice, cola, oolong tea and of course, being in Kashimo, Tomato juice. Since I was driving I had tea.

Keichan is chicken, cabbage and onions in garlic and sweetened soy based marinade sauce and is served on wax paper uncooked. Each sauce recipe is different. Some add sake, some add sugar, some even add plum wine. It is the responsibility of the customer to cook it at the table. The dominant method for cooking keichan is on a flat skillet over a flame or using an electric hot plate. But Kozato they use domed skillets which is sometimes called a Mongolian skillet (Japanese call it a Ghingis Khan). At the table there are extra seasonings like red pepper flakes and black pepper for those prefer spicier food. After a few The master brought out the uncooked mix and placed it all, wax paper and all on the skillet. We added a healthy amount of red pepper which not only gave it heat but also a nice reddish tint and began to stir. (use one pair of chopsticks specifically for cooking as you are dealing with raw meat)

Realizing that keichan and salad would not be enough, we decided to order some side dishes; jaga cheese (butter grilled potatoes covered with melted cheese served on a small iron skillet), age natto (fried tofu stuffed with fermented soy beans), tororo imo to uzura (grated yams with quail eggs), fried cream gyoza, and a pig in a blanket like dish made with tofu and sausage wrapped in a eggroll-like pastry. The side dish menu is quite extensive and all are amazing!

Within a few minutes, the keichan was cooked and ready to eat. Each person used their own chopsticks to take food off the skillet. Kashimo people usually bypass formalities so no need to turn your chopsticks around when taking from a communal plate. Keichan is spicy, sweet, tender and puts a smile on your face. It didn’t take long to finish the plate of keichan before we ordered another helping along with a few more rounds of drinks. When cooking keichan, juices pool at the base of the skillet so to finish off, we ordered udon to grill which tipped our bellies to full.

After almost 3 hours of eating, talking and drinking over keichan, it was time to leave. Even though we consumed two trays of keichan, udon, a dozen drinks and several side dishes, the cost came to only ¥2000 per person but more importantly we were all very satisfied.

• Keichan is available at many locations in Kashimo however most are only open in the evenings. If you want to try keichan during the day, visit the Yurakukan. 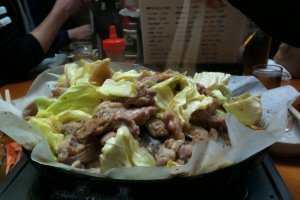 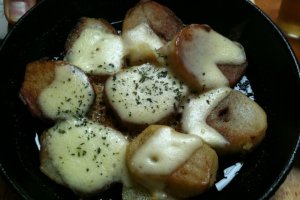 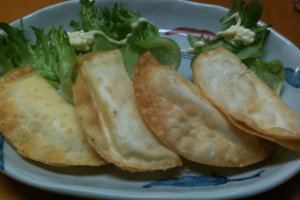 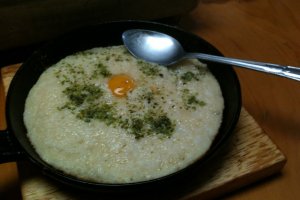 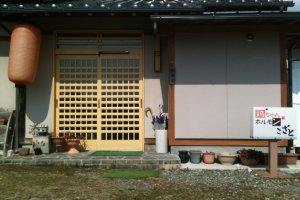 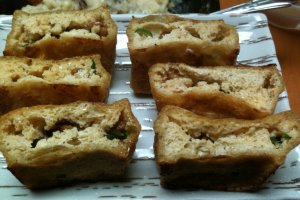