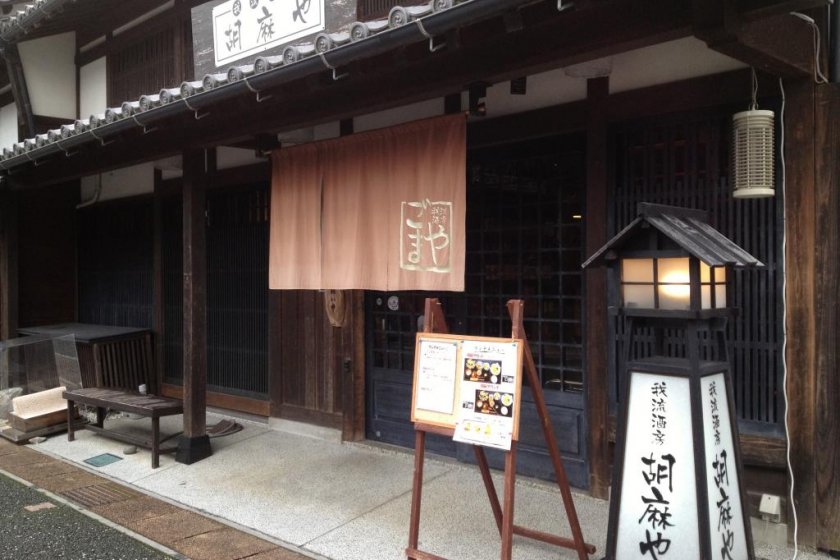 Welcome to Gomaya in Mino City

After spending the morning at Oyada Shrine and visiting the Udatsu lined streets, my friend and I had worked up an appetite. I asked for a recommendation from the local tourism office and was directed Gomaya.

Located only a few steps from the former Imai residence and the Washi Akari Art Gallery, Gomaya has both family style seating as well as small private rooms for groups between four and eight people in a traditional Minka style building with udatsu roofs.

Though it was a busy weekend lunch time, we got seated quickly in a small private room for four.

There were three set lunch menus; Mini-don for ¥1080, Gomaya Lunch for ¥1250 and at the top was the Gomaya Set priced at ¥1380. Each menu consists of salad, rice, chawamushi, cooked vegetables, steamed egg hotchpotch, dark brown miso soup, pickled vegetables, dessert and a drink. The main courses were very different. There were three choices for the mini-don: seafood, scallion and tuna, or sweet miso covered deep fried pork cutlet. For the Goyama Lunch you could choose from four choices: mini tempura, miso pork cutlet, chicken karaage, and a pick of the day. The priciest Gomaya set offered a main course of tempura and five slices of sashimi.

Usually I would dive right into a main course but instead decided to go for the soup and hotchpotch to warm me up on this cold drizzly morning. The hotchpotch was soft and almost sweet like pudding with a light fish based flavoring. The miso in the soup was dark brown and a kind I had never had. There are many kinds of miso in Japan and this one was sweeter than red yet stronger than white miso.

The pork cutlet was fried enough to keep the juices in and meat tender yet not oily when bitten into. It was not an overwhelming but perfectly sized and satisfying meal. All this was topped off by coffee and some small cakes.

At night, Gomaya is an izakaya serving set menus and “otsumame” along with a great selection of local and national sake.

Gomaya is a local place so not only tourists but locals can be seen mingling. They are welcoming and not afraid to strike up a conversation about Mino and all that’s good about it including “Gomaya”. 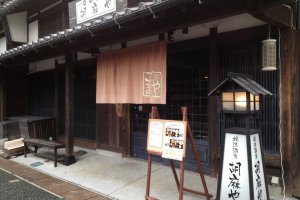 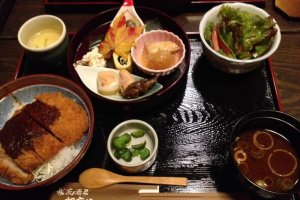 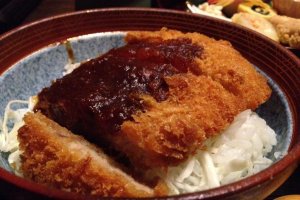 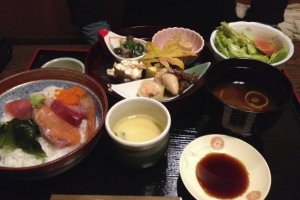 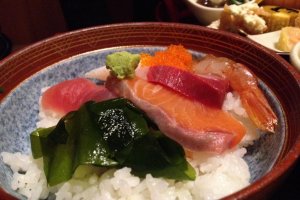 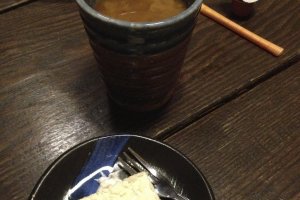