Appreciate the beauty of a 1500 year old cherry tree

Often when we think of things that are 1500 years old, our minds turn to ancient documents, architectural ruins, or excavated items. In Japan there are a number of trees that are estimated to be that age, and one of them can be found at Gifu's Usuzumi Park. The tree is said to have been planted by Emperor Keitai all the way back in the 6th Century, and it has withstood a wide range of natural threats to still stand strong today.

The Usuzumi Zakura stands over 16 meters in height, and the best time to catch it in full bloom is typically the early to mid April period.

Usuzumi Park is located a five minute cab ride (or around 25 to 30 minutes on foot) from Midori Station, served by the Tarumi Line.

For those who are driving, on-site parking is available. Typically it's free, but during the sakura season there is a nominal fee. 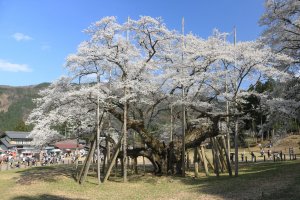 Elena Lisina a month ago
Hanami is coming soon... I miss it so much!
Reply Show all 0 replies
1 comment in total