5 of Japan's Most Beautiful Bridges

Get from A to B, scenically!

Japan is known for a wide variety of bridges in both traditional and modern styles, and if you're traveling around the country you may want to check out some of the most beautiful ones. This list covers five of the best, whether it's the beauty of the bridges themselves, or the stellar surroundings you can enjoy while traversing them!

Tsunoshima is a small island that sits in the Sea of Japan, which is connected to the Honshu mainland courtesy of the Tsunoshima Bridge. Completed back in 2000, the bridge is 1780 meters long and provides some incredible views out over the surrounding azure waters. It has become a popular spot with photographers, for good reason!

Located in Tokushima's Iya Valley, the Kazurabashi bridge gives off some serious Tarzan vibes and is not for the faint of heart! The 45 meter-long bridge is constructed by vines connected to cedar trees, and reinforced with steel cables these days. The creaks and noises still happen, and the bridge swings a little, so keep your wits about you!

One of Japan's most iconic sights is Yamaguchi's Kintai Bridge, which has a history dating back to 1673. It's made up of five wooden arches on four stone piers, and was designated as a National Treasure back in 1922. As well as being beautiful in and of itself, the surrounds are equally scenic - particularly when the cherry blossoms of spring and the changing leaves of autumn are present.

Opened in 1993, Tokyo's Rainbow Bridge crosses part of Tokyo Bay and spans almost 800 meters in length. The bridge accommodates vehicle traffic, the Yurikamome Line, and even pedestrians! If you plan to walk over the bridge, take note of the views you'll get from either side - the north route shows off Tokyo Harbor and the Tokyo Tower, whereas the south route highlights Tokyo Bay - and even Mt. Fuji if you're really lucky!

Hokkaido's Taushubetsu Bridge has a mystical quality to it - the disused railway bridge is only visible during certain months of the year, as the water levels of Lake Nukabira mean it can become fully submerged. The best time of year to see the bridge is from September to October, where the bridge typically reflects off the water's surface like you can see in the photo below. 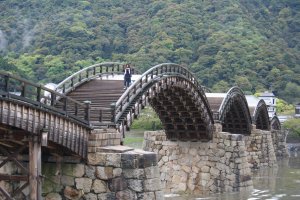 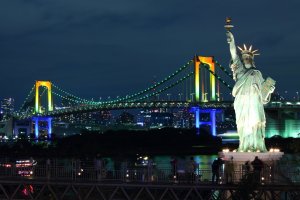 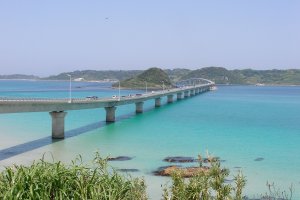 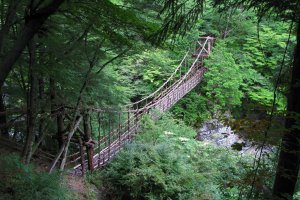 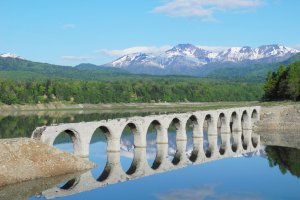 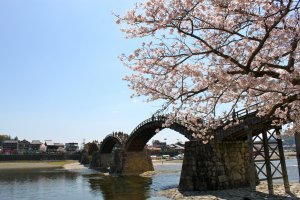 Sander van Werkhoven 4 weeks ago
That picture of Taushubetsu Bridge is absolutely stunning!

The most impressive bridge for me is still the Akashi Kaikyo, just because of its sheer size. I've seen some pretty big bridges before, but Akashi Kaikyo easily dwarfs all of them.

And one I haven't been myself but looks amazing: Kokonoe "Yume" Otsurihashi, a spectacular foot bridge in Oita-ken: https://i.imgur.com/IqMkrjd.jpg
Reply Show all 1 replies

Kim Author 4 weeks ago
Akashi Kaikyo is impressive, for sure - I contemplated it for the list! I didn't know about the spot in Oita, but it's gorgeous, especially with all that lovely fall foliage!
Reply

Elizabeth S 4 weeks ago
One of my favorite views of Rainbow Bridge was returning from the Izu Islands in the evening. The bridge and the city lights are a twinkling welcome back, or welcome home.
Reply Show all 2 replies

Kim Author 4 weeks ago
That's such a beautiful way of looking at it!
Reply

Bonson Lam 4 weeks ago
Wow, that must fill your heart with joy seeing it coming home on a ship. I would love to be there. I only went over it, and it is huge!
Reply

Lynda Hogan 4 weeks ago
Japan has some seriously beautiful bridges, I wonder if anyone has ever released a book on them - there's enough material for them. Kudos to you for picking five of the best; a hard choice for sure.
Reply Show all 1 replies

Kim Author 4 weeks ago
I feel like everyone's five best would be different!! There are so many beautiful ones out there, without a doubt!
Reply

Luca De Pasquale 4 weeks ago
I love how yo mixed traditional iconic formes with more modern bridges such as the one in Tokyo, which at first glance really gives you the impression of being in New Yorkk thanks to the Liberty Statue and the Night Lights !
Reply Show all 1 replies

Kim Author 4 weeks ago
I love that area of Odaiba! I'm glad you liked the traditional/modern mix - I feel like it's quite representative of Japan overall!
Reply
9 comments in total
Back to Contents