Big on water views, Edogawa City Ward is punctuated with scores of small public parks. However, it is the views of the surrounding rivers and bays that hold centre stage with some seriously open spaces. Here is a quick introduction to some of the natural spaces of Edogawa and how to reach them.

A huge expanse of park said to be the largest in central Tokyo, Kasai Rinkai Park is guaranteed to restore one's faith in a spacious Tokyo. Looking out over Tokyo Bay, the park's ferris wheel, aquarium, seabird sanctuary and observation building, combined with its walking trails, barbecue spots, lawns and beaches offer something for everyone.

Possibly one of the city's most amazing sights, the Koiwa Shobuen Garden runs along the banks of the Edogawa River and is home to stunning array of some 50,000 iris flowers. In full bloom during the middle of the year, the garden becomes an ocean of purple and pink with walking trails and rest spots for awed visitors.

A 5-minute walk from Edogawa Station on the Keisei Main Line.

Connecting with the hilly banks, BBQs and rose beds of neighbouring Fuji Park, Nagisa Park sits along the banks of the Kyudeo River with views into Chiba prefecture. A nice public space to spend time with the family, a children's train runs through the grounds of the park while the northern area features a pony riding area.

Great for its dedicated free BBQ area and as a viewing spot for the annual Edogawa Hanabi fireworks show, Shinozaki Park connects with the 6-kilometer long green space that runs along the west bank of the Edogawa River. The park's recommended walking course also takes in the many tree species that can be found here.

A 15-minute walk from Shinozaki Station on the Toei Shinjuku Line. 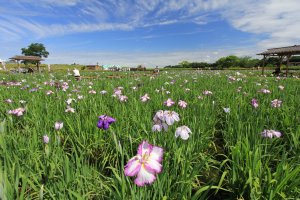 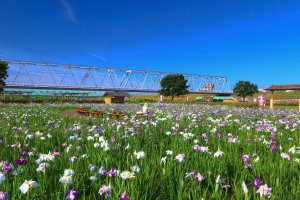 Elena Lisina 2 weeks ago
I'd planned to visit Kasai Rinkai Koen few times and each time my visit there was postponed for the other places favor. Hope to get there next time!
Reply Show all 2 replies

Elizabeth S 2 weeks ago
It’s well worth the visit. The aquarium there is really good.
Reply

Elena Lisina 2 weeks ago
I'm interested also in the birds' sanctuary as I like to take photos of animals and birds.
Reply

Sleiman Azizi Author 2 weeks ago
It's a great place. One of my memories is playing Cluedo with friends and getting into an argument over it, lol.
Reply
5 comments in total
Back to Contents