A mix of everything in Tokyo's north

An easy strolling destination in Tokyo's north, Kita City Ward is home to an eclectic mix of curious sites and fascinating locations. From ancient trees to stylish retro architecture the city has much to offer. Here is an introduction to some of the many landmarks and historical spots of Kita and how to reach them.

An extraordinary living monument to the passage of time, the Gingko Tree of Oji Shrine is a massive 600-yeard old tree. Registered as a National Monument, the tree stands at around 24m with a whopping trunk circumference of just over 5m. Located by the banks of the Shakuji River, the tree is a definite jaw dropper.

A 2-minute walk from Oji Station on either the Namboku or the JR Keihin-Tohoku lines.

Not much remains of this pre-Edo era base for the Ogigayatsu Clan. The Inatsuke Castle Remains once protected the road between Edo and Iwatsuki castles and was built by the clan's chief strategist, Ota Dokan. A wooden statue of the man is revealed to the public on the 26th of each month at the adjoining Joshoji Temple.

A 3-minute walk from Akabane Station on the JR Keihin-Tohoku Line.

Probably one of the most respected and widely used household products in the entire country originated right here in Kamenoko Tawashi Nishio Shoten. A natural fibre scrubbing brush developed in 1907, the success of its sales is matched only by the stylish architectural design of this original pre-World War II building.

A 6-minute walk from Nishi-sugamo Station on the Toei Mita Line.

Dedicated to Kondo Isami and his Shinsengumi police force, the Kondo Isami Memorial honours the man who tried to stem the tide of change sweeping Japan that signalled the collapse of the Tokugawa Shogunate. Finding himself on the wrong side of history, Kondo was eventually capiured and then, as were the turbulent times, executed.

Direct access from the East Exit of Itabashi Station on the JR Saikyo Line. 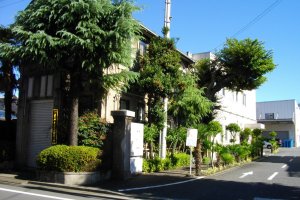 Kim 3 weeks ago
I'm always impressed with the history behind some of Japan's trees. I'd love to see the 600 year old gingko!
Reply Show all 2 replies

Kim 3 weeks ago
Yes, that's a very good point...have to admire their resilience!
Reply
3 comments in total
Back to Contents