A taste of some of the local foods of Kumamoto

Known for its unique dishes, Kumamoto prefecture is home to some fascinatingly delicious local foods. Horse meat is popular in the prefecture and just like Kumamoto's signature spicy lotus root dish, horse meat began as an emergency food in feudal times. Complementing theses unique flavours is sweetfish sushi with the rice inside the fish and a popular rice flour dumpling filled with sweet potato and red bean paste. Here is a simple guide to some of the regional cuisine of Kumamoto.

Horse meat sashimi is famous in Kumamoto. Known as basashi, the meat's vibrant red colouring suggests a powerful flavour but in fact the taste is considered to be quite clean. Usually served with grated garlic or ginger with soy sauce, the dish was said to have originated during a period of food shortage in the 16th century though today, basashi is quite the fashionable feed.

Another famous Kumamoto delicacy with an emergency origin story, karashi renkon are lotus roots filled with Japanese mustard and miso paste and then battered and deep fried. Said to cleanse the blood, the lotus root's pattern resembled that of the powerful Hosokawa clan and with one of their lords falling ill, the dish was created to help help him recover.

The sweet flesh of the ayu sweetfish is a popular delicacy throughout the country. In Kumamoto, ayu no sugatazushi sees the entire ayu is used as a dish of sushi, with the rice being served inside the fish. Whether it is cured with vinegar or grilled, ayu no sugatazushi is a mainstay of any celebration in the prefecture.

Traditionally served to guests who arrived unexpectedly, ikinari dango is a confectionery made with a layer of sweet potato and a layer of red bean paste all wrapped in mochiko rice flour. Literally meaning 'sudden dango', this simple but wholesome sweet is one of the prefecture's most popular treats. 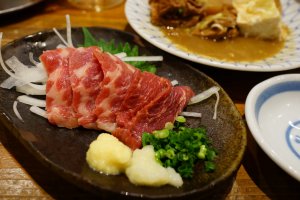 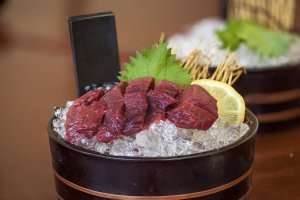 Elizabeth S a month ago
The karashi renkon origin story is so heart-warming. But um, it must be really sharp with all that karashi in it. I've never seen it up here in Kanto, but then I wasn't looking for it.
Reply Show all 1 replies

Sander van Werkhoven a month ago
It's best eaten sliced rather thin (most restaurants serve it much thinner than shown on the picture above), but it's really good! I have heard multiple stories however of people buying karashi renkon at a shop, not really knowing how to eat it, and just taking big bite. That's a mistake they won't ever make again....
Reply

Kim B a month ago
I tried ikinari dango in Fukuoka, actually, and it was so good - never knew what it was called or that it was actually a Kumamoto original!
Reply Show all 2 replies

Sleiman Azizi Author a month ago
Do you recall if yours was served warm?
Reply

Kim B a month ago
It was! It was from a little store in the shopping street leading up to Dazaifu Tenmangu, and I just remember thinking what a good combination it was. Now I know what it's called and when I eventually get to Kumamoto one day I'll be tracking more of them down!
Reply

Elena Lisina a month ago
I always buy dango :)
Reply Show all 1 replies

Sleiman Azizi Author a month ago
Dango is a must!
Reply

Bonson Lam a month ago
I didn't know that Karashi renkon has health benefits, though it is a Kumamoto staple that you can't escape from, you can buy it just about anywhere, from ma and pa shops to the souvenir stores in the city and airport.
Reply Show all 1 replies

Sleiman Azizi Author a month ago
Well, after it's been deep fried, I wonder how healthy it remains....
Reply
9 comments in total
Back to Contents