A taste of some of the local foods of Nagano

If soba buckwheat is not king in Nagano prefecture, then it is news to the locals. Famed for its Shinshu soba noodles, Nagano is also home to other hearty buckwheat foods like oyaki dumplings, and the truly ancient meal, soba gaki. Rice does make an appearance with the region's own equally hearty gohei mochi rice cake. Here is a simple guide to some of the regional cuisine of Nagano.

There may be contenders, but it's hard to argue that Nagano doesn't produce the best soba noodles in Japan. Shinshu soba, as they are known here, are thought to be the original noodle form of soba with some of the best found in Togakushi in the north of the prefecture. Served cold or warm, travelling to Nagano just to eat the soba is to be expected.

A mountainous dish that is simple, hearty and delicious, gohei mochi is pounded rice, coated with miso sauce, skewered and then grilled. Unlike the more common mochi rice cakes using mochiko rice flour, goehi mochi is pure rice. With its roasted miso and sweet nutty flavor, gohei mochi are a real treat, particularly on a cold winter's day.

Growing rice wasn't an easy thing in pre-modern Nagano with the locals turning to soba buckwheat for their sustenance. Fermented buckwheat dough wrapped around a stuffing of Japanese sansai mountain vegetables, oyaki is a traditional Nagano dumpling roasted on an iron pan. Served piping hot, these dumplings are both crunchy and chewy and surprisingly addictive.

Possibly the oldest known dish made with soba, soba gaki is buckwheat and water kneaded together. The resulting sticky dough is then formed into small shapes before being dipped into whatever flavouring is available. A taste of an ancient Japan, soba gaki is often grilled or added to a soup, but however it is used, this versatile food is delicious. 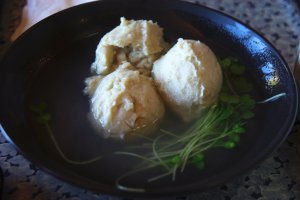 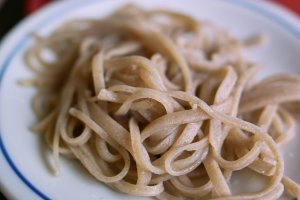 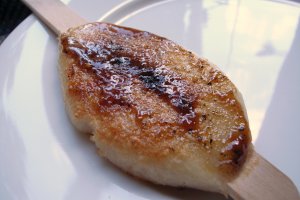 Elizabeth S 10 months ago
A great memory of Togakushi village was the soba shops on the approach to Okusha. One of the soba shops serves "soba sofuto", soft icecream.
Reply Show all 3 replies

Sleiman Azizi Author 10 months ago
It's impossible to forget the taste of Togakushi soba.
Reply

Sherilyn Siy 10 months ago
I've seen long lines for an oyaki stall in a matsuri. I wanted to try but didn't want to wait in line!
Reply Show all 1 replies

Sleiman Azizi Author 10 months ago
You need an express pass like the ones they use at Disneyland.
Reply

Sander van Werkhoven 10 months ago
Spent a couple of days in Nagano prefecture last year, only knew about the Shinshu soba :-(
(and the less uniquely local specialties like basashi and again, sauce katsudon...)

Sleiman Azizi Author 10 months ago
Shinshu soba is without doubt my favourite soba. Nagano is also known for its locusts too. Alas, there's only so much one can cover in a short introduction.
Reply

Elena Lisina 10 months ago
Oyaki are tasty! Also I tried wasabi soba at the Wasabi plantation near Azumino - it was different!
https://en.japantravel.com/nagano/wasabi-special/31863
Reply Show all 1 replies

Kim 10 months ago
I love how some of the dishes you've been highlighting have such interesting histories. Something I'd never have thought about until reading your posts!
Reply Show all 1 replies

Sleiman Azizi Author 10 months ago
I aim to please, lol.
Reply
13 comments in total
Back to Contents