As one of Japan's most popular hot spring resorts, Kusatsu has the full range of accommodation, from youth hostels and guest houses up to high-end ryokan with eye-popping prices. One place I enjoyed staying at was the Hotel Ohruri, which I found not only to be very good value, but also to have an endearing old-school charm.

Kusatsu is only a small place, so the hotel is close to everything, just a short walk from the bus terminal and Yubatake ('Hot water field'), the central focus of the town. Also nearby are Sai-no-kawara Park, the pleasant 'Onsen Street' with its rows of shops, and the equally charming Kataoka Tsurutaro Art Museum.

My room cost just ¥6750 for the night, including both breakfast and dinner, of which more later. It was cosy and comfortable, with sliding doors, paper screens on the windows and a tatami floor, as well as usual facilities like a fridge, safe and TV. There was a teaset on the low table with its two chairs, but when I came back after dinner I found my futon had been laid out for me; the room was well heated, but I took an extra cover from the closet anyway for the extra cosiness.

Elsewhere in the hotel there's a lounge by reception that put me in mind of a slightly elderly airport, and you can also walk past a couple of games machines and vending machines to a gift shop, which has a wide range of touristy local goodies. Reception is also where you pick up your yukata to walk around the hotel and to the public bathrooms; there are both indoor and outdoor baths, separate for men and women, and it was very soothing to lie back in the steaming water after a long day of travel and exploring of the town.

Dinner and breakfast were both served buffet-style in the large dining room, which I found entertainingly convivial. This system seemed to me to have been designed to cater to large groups, an impression enhanced by most of the diners wearing their hotel-issue yukata and overjackets.

Dinner was mostly solid, tasty Japanese comfort food: fried noodles and chicken, curry and rice, tempura, salmon sashimi, pickles and salad, and I filled my plate two-and-a-half times even before I noticed dessert. I especially enjoyed the background music being played, stirring movie scores such as 'The Big Country' and 'Star Wars'.

Breakfast was more of a mix, with pasta alongside the rice, meatballs and omelets offsetting the salad and pickles, or bread and jam for continental types. Both meals left me satisfyingly full, setting me up respectively for an evening's strolling around town and the next day's sightseeing.

The booking website I used says there's one kind of room, 'Japanese room', and gives rates for up to four people, though four people plus luggage in the one room would be something of a squeeze. Rates I imagine change with the season, but a couple of checks suggest you'll pay roughly ¥7000 to have a room to yourself, ¥6000 per person if you're sharing. Given the location, facilities and inclusion of two meals, I reckon you'll be hard pressed to find better value anywhere in town. 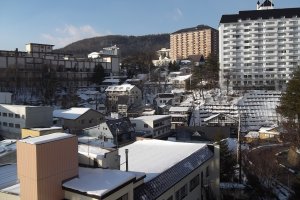 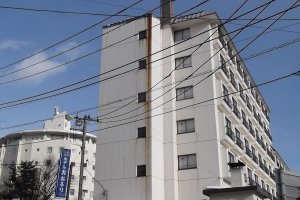 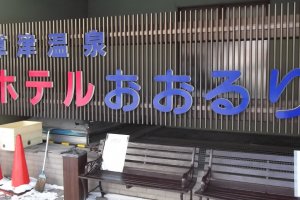 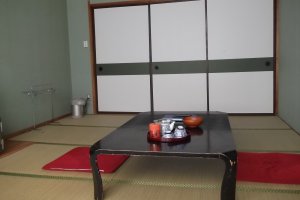 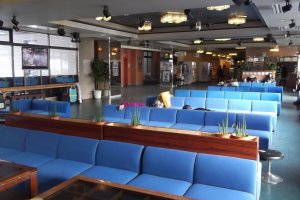 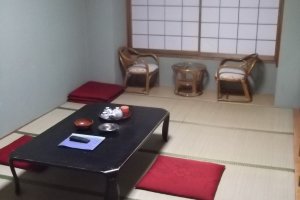 Veronika Tomanova 6 years ago
Seems like cool place to spend night! And i think the price is OK as well.
Reply Show all 0 replies
1 comment in total