Cathedral That Rose From the Ashes

Hiroshima’s A-Dome and Peace Memorial Park are its most poignant landmarks, and what most people come to Hiroshima to see. The Memorial Cathedral of World Peace is less visited, hidden in streets off the main tourist radar. Its impact is not as powerful as the stark skeletal shell of the A-Dome, but the cathedral is still an evocative monument to the awfulness of war, and a shame if missed.  I almost did, only discovering its existence by chance.

The cathedral looks plain and grey. This serves to create an awe and reverence for what it represents. I don’t suppose death comes in a lot of colors. Somehow it has about it a noble and stoic air, required of recovery, of rebuilding, literally from ash. It used to be a parish church bombed into a rubble of ash. The German pastor of the church, Hugo Lassalle, rebuilt the rubble into a memorial for the world’s first A-bomb victims, turning the loss of his church, parish, and people into a clarion call for peace.

The cathedral is monastery like, wholly sombre and austere, not your usual cathedral with overflowing ornate Gothic curves and carvings. It is said to be in a modernistic style, and was designed by Murano Togo, a Japanese architect, which explains the Japanese bamboo, plum, and pine motifs in the stained glass windows.

One great thing about the cathedral is that the world got involved in its inception, either through generous funds or gifts, thanks to Lassalle’s unrelenting determination to have a phoenix rise from ashes. This occurred on 6 August 1954. The cathedral was built using about 240,000 bricks made from clay at the bomb site. Germany donated the four Peace Bells which top the cathedral’s 45-meter tower. These bells were crafted from the steel of weapons used during World War II, and inscribed with "The arms of war now sound the call to peace". The pipe organ with 3,600 pipes was also donated by Cologne, Germany, while the black marble altar came from Belgium. The tabernacle is from Spain, and the stained glass from Austria, Portugal and Mexico.

Outside is a garden of maple. Sit on a bench and look to the top of the pillars of the cathedral, and notice the carved trellis work, then the impressive iron carved doors. You could spend an hour looking at everything. It is a cathedral and is not small. Around it are a crypt and a chapel, too. You may not want to enter the crypt, but the chapel is a cozy enclave of peace.

The cathedral is now an Important Cultural Property, the first architectural success to come forth after the ravages of the war, together with the Peace Memorial Museum. It is also one of the famous Catholic cathedrals in Asia. It is splendid architecturally, in the way the well placed piling of what is essentially brick and mortar can make one very quiet. One is silenced by feeling.

English language brochures are available inside the church. I was able to enter the church by pushing the huge front door hard.

You can walk there about 20 minutes from the station, but it may be better take the Hiroshima Electric Railway streetcar for Miyajima-guchi, and get off at Kanayama-cho. The Cathedral is located in front of an elementary school. I found this symbolic of hope and promise. 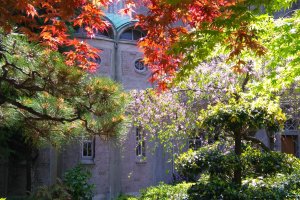 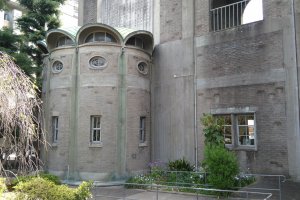 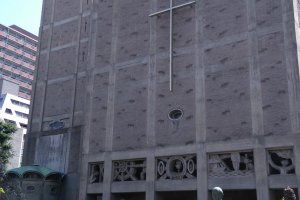