A reminder for a new age

To commemorate the 75th anniversary of the bombing of Hiroshima, a virtual tour of the museum has been released, as well as a Peace Park tour from the day of the anniversary event.

In 1945, the devastating reality that was World War II left its indelible mark on the city of Hiroshima. The dropping of the very first atomic weapon in war destroyed the city, shattered its citizens' lives and forever altered the hearts of those who suffered.

Dedicated to that terrible memory, the Hiroshima Peace Memorial Museum is a sombre and heart-moving reminder of the costs of war. Since its establishment in 1955, the Museum has seen an average of 1 million visitors per year. What each one of those visitors comes away with is, of course, up to them but nobody walks away without being affected.

In 1994, the Museum was made up of two sections, the East and West Wings with the former focused on the Hiroshima's history before the bomb and subsequent destruction while the latter wing focused on the bomb's damage. Renovations to the Museum began in 2014 and ended in in 2017. Further upgrades to the Museum, including earthquake safety measures, then continued on until April of 2019.

Courtesy of these upgrades, the Museum now has a greater focus on the memories of the victims of the disaster. Museum routes have been updated to allow visitors more time to reflect on these memories through the use personal mementos. About 20,000 such mementos are housed by the Museum and, along with owner portraits, add a solemn touch to this human tragedy.

With these changes, the Museum and the last remaining survivors of the bombing are hoping to be able to pass on the memories of that time in the hopes that it will never be repeated again.

Please check the official website for opening and closing times.

Take Tram Line 2, 3 or 6 from JR Hiroshima Station to Genbaku Dome Mae. The ride is about 15 minutes followed by a 10-minute walk. Bus options are also available. For further details please check the official website. 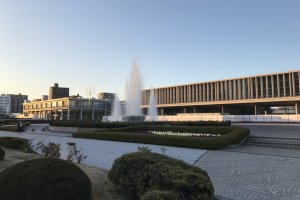 Elizabeth S a year ago
The part that got my attention is the preservation of the memories of people. I was lucky to hear the first hand accounts of survivors, but their numbers are dwindling. The museum is a tough thing to see, but preserves a message for the ages.
Reply Show all 1 replies

Elena Lisina a year ago
It is very impressive museum, indeed. I and my Japanese friend weeped there...
Reply Show all 3 replies

Sleiman Azizi Author a year ago
It's a sad place, really. But it kind of needs to be in order to have some sense of understanding and, I guess, hope.
Reply

Kim a year ago
I like what you said about hope. That's definitely what I took from it. Of course, I was in tears too - but I felt like the museum was such a reminder of why peace is so important.
Reply

Elena Lisina a year ago
Unfortunately, there are people who don't understand that and still continue wars. (((
Reply
6 comments in total