The most enthusiastic baseball fans in Japan

Hiroshima might not have the best baseball team ever (in fact, for 25 years, it was considered to be the worst baseball team in Japan), but it certainly has the best fans. There is not one single day that I don't see someone wearing a Hiroshima Toyo Carp cap in the city, and almost half the shops near the stadium and further away have Carp-supporting signs at the entrance. If you hang out around Hiroshima Station during the season, you might find yourself trapped in a red and white wave pushing you towards the nearby Mazda "Zoom Zoom" Stadium, while the team's hymn resounds in the speakers.

After getting caught in the crowd a few times I decided that I wanted to be a part of it. So I followed the crowd, and I ended up trying to purchase a ticket in the stadium office. And I say "trying" because it is not as simple as it may seem. There are two different ticket offices outside the stadium: one of them sells tickets for the very same day the team is playing (if you visit on a game-day) while the other sells advance tickets. These offices are open every day from 11AM to 2PM, and from 11AM to 10PM on game days.The problem comes when you hear the following sentence: what ticket do you want, and you are given a carefully folded map of the stadium that, once open, occupies the entirety of the desk, with which seems to be at least thirty different kinds of seats, with different locations and prices each. All in Japanese. So I faced the situation the same way I ever do: give me the cheapest. The cheapest adult ticket, I learned afterwards, costs 1800 yen and it comes in two areas of the stadium; Carp Performance B, the highest zone in the stadium, and Infield Non-Reserved, a bit far away but with a centered view. The seats here, apart from not very comfortable, are not numbered, which means that you will have to fight for a good spot. By the way, do not make the same mistake I did: do not try to pay with a credit card, because they only accept cash!

Night games usually start at 6pm. However, if you have bought one of the cheap tickets, my advice is that you go to the stadium at least 3 hours in advance, especially if you are going with a group of friends and want to be seated together. If you don't seem to be able to find a free spot, then you can buy yourself some space in the restaurant located underneath the Infield Non-Reserved area, or just walk around the stadium. The field is visible from every area and it is not mandatory to stay seated during the game.

The next inconvenience I had to face was... I don't know a thing about baseball. Before the game started, I looked at the scoreboard like it was written in some ancient, extinct language, trying to determinate what those numbers could stand for. And here is where the e-mobile pocket WiFi from Wifi-Hire.com that I was carrying and Yahoo Answers came up useful. I typed "how baseball works" in the search bar and read the first two results. I did learn a bit about the intricate mechanics of the game, but I also learned that "games do not have a limited time, they can last from 2 to 6 hours", and then I did understand why everyone was using a bike to get to the stadium, instead of public transportation, which stops running at around 9.30pm.

The game itself was really interesting to watch. But the most fun part was seeing the Toyo Carp fans in action. They have a chant for every player and they won't stop singing and clapping even if their team is carrying out the lamest game in the history of baseball. When we were around two hours in, every single person in the Carp Performance audience started to blow up long, red balloons which then they let go in a perfectly synchronized show while the team mascot (which, for some reason, is not a Carp) cheered up the kids in the first rows.

Unfortunately, I had to leave before the game ended, because I didn't want to miss the last bus home. The noise from inside the stadium accompanied me the whole way back to the station, and I left feeling that those 1800 yen had been some well spent money. Going to a baseball game is definitely one of the most fun things you can do while visiting Hiroshima. 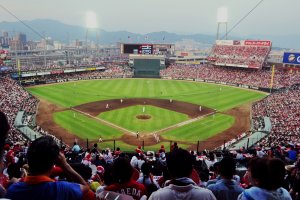 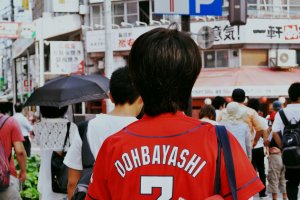 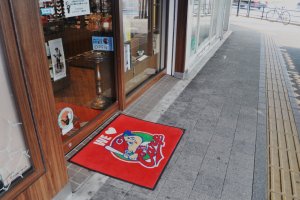