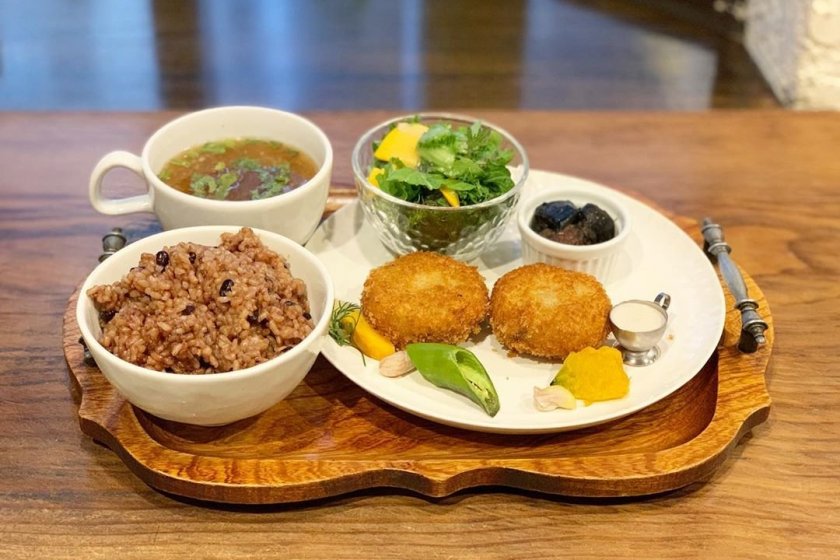 Blending the old with the new for special dietary needs

In Japan, a kissaten refers to a traditional type of coffee shop that became popular in the Showa Era (1926–1989). While there are still kissaten out there, many have been replaced by more modern cafes, or chain coffee shops like Starbucks, Doutor, and Tully's. In Hiroshima, however, you'll find a kissaten that has been preserved and manages to seamlessly blend the charms of the old with the needs of present day. Kissa Saeki serves up meals that cater to vegetarians, vegans, celiacs, and those who follow kosher and halal diets, all in the surrounds of an original kissaten building.

The menus at Kissa Saeki are in both English and Japanese, and almost all of the dishes here are vegan friendly besides a small handful that use chicken. The proprietor explained to me that the meals containing chicken are cooked separately from the vegan meals, eliminating any chance of cross contamination. There are also clear icons on the menu for what meal sets are gluten-free, or can be made gluten-free (for instance, some of the meals can be made gluten-free if the sauce is removed), making it easy for those with intolerances or allergies. For those requiring halal meals, there is a logo that states "no alcohol used when cooking", which is helpful to know. A number of Japanese recipes use mirin or rice wine in the cooking process, so a clear indication that this isn't the case makes ordering a breeze.

There are a range of different meal options at Kissa Saeki, with main dish choices like chickpea croquettes, lentil hamburger patties, or fried wheat gluten cutlets. Pair your main in a set which comes with miso soup, fermented brown rice, salad, and home-made pickled vegetables, and you've got yourself a complete meal. 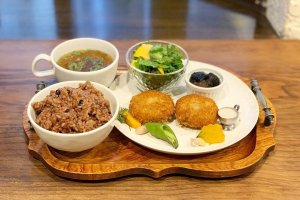 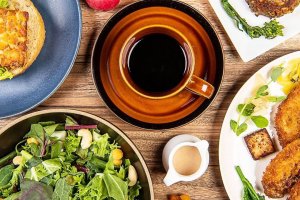 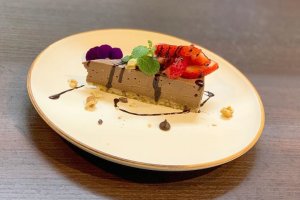 Kim Author 11 months ago
The presentation is really beautiful!
Reply

Sleiman Azizi 11 months ago
Vegan friendly consideration seems to be a growing trend in Japan.
Reply Show all 1 replies

Kim Author 11 months ago
They are! It makes me happy to see. I have family members who are vegan so it's a bit of a passion to uncover spots like these. Hopefully it helps other vegans who are visiting or living in Japan!
Reply
5 comments in total