Learn to ski in an afternoon in English or Japanese

Does the thought of abseiling down a 20 storey skyscraper scare or excite you? If it is the latter, and you are both confident and teachable, then you can imagine how much fun you will have learning to ski or snowboard here at Tomamu snow resort. The knowledgeable, humble and caring teachers from Hoshino’s Snow Academy will have you trying the slopes for yourself in less than three hours.

You can book the classes on the same day, though the English and the “how to stop” group lessons tend to be sold out. Notice how the classes don’t say “how to stop falling”, as falling and making mistakes is an integral part of learning. There are no short cuts to mastering snowboarding, or skiing, for that matter. The teachers come from all over the world, from as far as Chile or New Zealand, though most teachers are from Japan. There are morning and afternoon classes, as well as separate kids and adult classes. On registration, they do a quick verbal skill check, which is less formal that the strict criteria that Club Med nearby uses to grade you into one of the 4 or 6 levels. Thankfully the classes here are a touch cheaper than Club Med as well.

Today we were in luck, despite only paying for a group class; we had the teacher all to ourselves in the afternoon, with two people paying ¥14,000. A private class for two would have costed ¥28,000 and even more at Club Med. Despite having only basic understanding of Japanese, and Ryosuke speaking little or no English, I was able to learn the ropes with minimal translation assistance. The body language, observation, repetition and correction more than made up for the language gap.

After just one class with Ryosuke from Osaka, I was able to snowboard down the equivalent of a 15 storey building. If you don’t believe me, have a look at the 32 storey Risonare Skyscraper which is not too far away from the top of the Nippo Ski Lift. The top of the lift, which fits 76 gondolas, is nearly half way up the building. The bottom of the lift is below the bottom of the same building

In many ways, learning to snowboard is like an exercise in Zen or martial arts. You may need to “brush on, brush off” a few thousand times before you truly master the basic strokes in such a way that it becomes second nature. After going up and down the slopes for the third time, or after you had your lunch break, it is easy to let complacency or the lack of muscle memory have the better of me. Forgetting the simple lessons from Ryosuke, like looking ahead, using your core muscles, and soon you would fall flat on your face, or on your bottom, again and again, and it is just as painful on the second or third fall as it is on your first. On the other hand, if it scares you to fall, the “bear it and grin” approach can work in snowboarding down 15 stories, using a zig zag breaking motion that is akin to driving downhill with your brake on, you do it until you tire yourself, or until smoke starts coming from the proverbial brakes from sheer exhaustion. Of course, the ski resort has an answer for that, the sit down snow sleds with turning handles and brakes which allow you to gently go down from cloud nine on a 4,200 meter downhill course without a care in the world.

On the other hand, a crash course in downhill skiing and snowboarding is not all tears and bruises. The lift ride up gives you a chance to see the world from a different perspective, a time to calm down and reflect on the birds that tweet half way up the mountain, away from the crowds or the kids chortling with laughter and screaming with delight as they win the Japanese equivalent of scissors and hammers. On the other hand a game of “I spy with my little eye’ would tire you quickly, for the vegetation changes little on this short ride, though my eyes never tire of the fairyland scenery, the hundreds of snow covered cypress trees like a white Christmas over and over.

What I like best about Ryosuke is that it was simple to learn, using easy to understand language, and being concise yet comprehensive with his words. He was patient, friendly but professional at the same time, a bit like the service I would experience over and over again at Hoshino Resort Tomamu.

Tomamu is 109.5km east of New Chitose Airport. While it is similar in distance by road compared with Niseko, a train or bus trip from the airport is faster, compared with its fabled rival to the west. 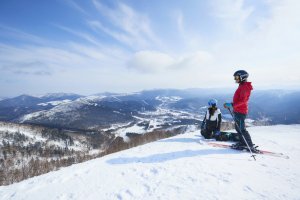 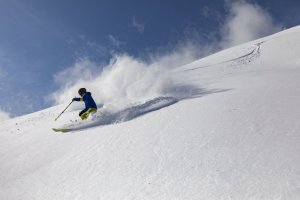 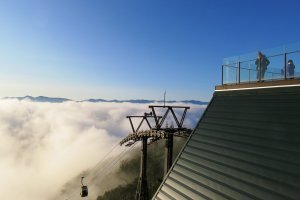 Novia Mardasari a year ago
Look so scare but fun!
Reply Show all 1 replies

Bonson Lam Author a year ago
That is the challenging part Novia!
Reply

Lynda Hogan a year ago
Its been a while since I was last on the slopes, I could do with a few brush up lessons. This sounds like my kind of place!
Reply Show all 1 replies

Bonson Lam Author a year ago
Between the little bird houses, the light up igloo ice village, and the friendly and caring ski instructors, this is the place for the whole family!
Reply

Kim a year ago
I love how you mentioned that falling and making mistakes is an integral part of learning, and that the staff here seem to follow that philosophy in the words they use when instructing people. I think that's so important for maintaining a positive mindset!
Reply Show all 1 replies

Bonson Lam Author a year ago
Very true! Having been to a number of beginner's classes myself (I think I end up only going snowboarding every few years), and so destined to be repeating beginner's classes for awhile, I can vouch that falling and landing on the snow many different ways is part of the learning experience. Yes we can do it! Just believe in yourself and you are halfway there!
Reply
6 comments in total