People interested in Japanese history as well as the world of money and banking, including piggy banks, can enjoy a visit to the Amashin Museum established by the Amagasaki Shinkin Bank.

Located five minutes' walk from Hanshin Amagasaki Station, the Museum's purpose is to encourage the development of regional art and culture. The main building of the Museum towering over smaller structures in this quiet neighbourhood was constructed to resemble Amagasaki Castle with its white walls. A gallery on the first floor showcases works by local artists. On the second floor, visitors can find fascinating displays of coins and paper currency used in 170 countries, from ancient times to the present. There are also commemorative coins for events such as the Olympics. Entering a coin's registration number into a computer system will bring more information about it (in Japanese only). The third floor of the Museum presents the history of Amagasaki City, which was the feudal Amagasaki Domain during the Edo Period. Visitors can step back in time viewing Edo-era armour and swords, as well as a model of Amagasaki Castle which is now in ruins.

Two doors down the street, visitors will find the World Piggy Bank Museum. The curators have scoured the world to amass 13,000 coin banks for the largest such collection in Japan, from 2100-year-old Chinese clay boxes to today's high-tech banks with sound effects and flashing lights.

As this building once housed the actual Amagasaki Shinkin Bank, the Made in Japan section is found behind the thick metal door of the bank vault, and includes coin containers resembling the Seven Gods of Fortune, castles, temples and maneki-neko (cats beckoning prosperity).

Coin banks from 62 countries are on display in the World Piggy Bank Museum, on two floors. Visitors can marvel at banks disguised as landline telephones or books to fool burglars, or find variations in depictions of a favourite animal. Donation boxes from European churches stand next to banks in the shapes of popular anime and movie characters. There is even a large bank in the shape of the Bank of Japan building in Tokyo, which can hold thousands of coins under its blue roof. Every month the main exhibit on the first floor changes. Sadly, some of the banks from the United States show discriminatory representations of African Americans from the past century. These are presented, not to be admired or emulated, but simply to demonstrate how coin banks reflect the culture in which they are made.

A corner of the second floor shows the history of the Amagasaki Shinkin Bank since its establishment in 1920. Bank books, early ATM cards, and commemorative goods such as calendars are on display.

As the World Piggy Bank Museum building is smaller than the main Museum building, groups of visitors should not be larger than four or five people. Admission to both buildings of the Amashin Museum is free. Opening hours are 10:00 am to 4:00 pm, Tuesday to Sunday. The Museum is closed on Mondays and national holidays. English-language pamphlets are available. 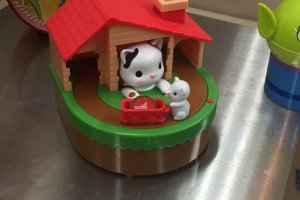 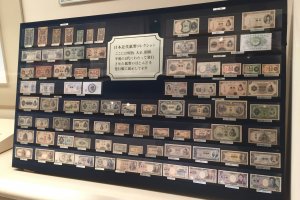 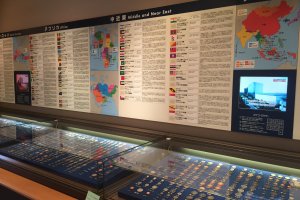