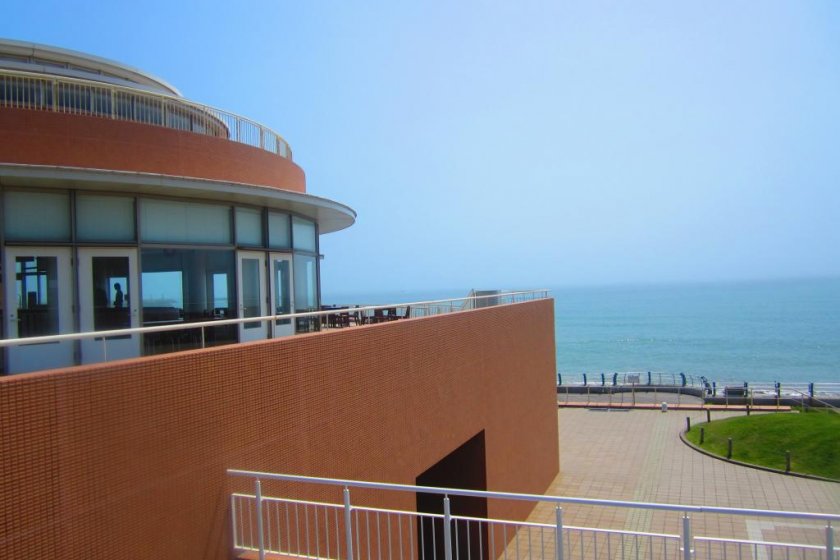 View of the side of Aquaworld, overlooking the Pacific Ocean

If you’ve never been to Oarai’s Aquaworld, you’re in for a treat. With numerous different kinds of activities under one roof, including interactive displays and touchable marine life, you can enjoy yourself for hours no matter what your age. Not to mention, this is a great way to beat the summer heat without spending all your money or sitting around indoors. But for those who don’t speak much Japanese, the icing on the cake is the new guidance system they’ve introduced in 4 languages, allowing foreign visitors a chance to enjoy and understand the many exhibits freely. All in all, there’s something for the kid in all of us.

At the entrance to the building is a large ‘free zone’ where you can enter without paying admission; this is where the gigantic gift shops sits, overflowing with rainbow-hued plush animals and other marine-themed goods. Meanwhile, next door is the food court, managed by local eateries and serving, you guessed it, quite a bit of seafood. But once inside the actual aquarium gates I was quite surprised to find how interesting and intriguing everything was.

Large, round plexiglass drums as tall as an average adult filled with glistening, silvery schools of fish are the first to catch your eye. Forget the rest of the building, I would have been quite content to spend a few minutes watching the coalescence and dissolution of various shapes caused by the darting, gliding, hive-minded fish. But it was necessary to move quickly in order to catch the early dolphin and sea lion show. The show is held in a large, atrium-type room with a huge pool in the middle and waterproof spectator seats lining one wall. The other wall, the stage, is one giant window reaching up to the ceiling, allowing the background of the show to be the beautiful blend of sea and sky of Oarai’s coast. For those who prefer to know what’s going on beneath the surface there is also an underground viewing area where you can watch what’s going on below, or visit with the dolphins (who apparently love to come up close to the glass to see people) when the show is over.

The show itself was highly engaging, with the clever sea lion Pudding doing handstands and even giving CPR. But the highlight was, of course, the agile and powerful dolphins. Leaping over twenty feet into the air, doing massive flips and jumps, tossing beach balls at the audience, even waving goodbye with their flippers at the end! Most impressive of all was when they launched their trainer out of the water like a rocket. The dolphins themselves are shared between other aquariums from time to time, in order to encourage breeding and to avoid needing more from the wild, and there is a vet on hand to make sure they are always happy and healthy.

Each section of the aquarium has different attractions, covering deep-sea dwelling fish such as the anglerfish, jellyfish, crabs, but especially sharks. Aquaworld has roughly 50 varieties of sharks, ranging from the large, vicious-looking giant sharks to the tiny bottom-feeders, one of the biggest collections in the world. There are even displays where you can touch the different kinds of shark eggs (after hatching of course); did you know some sharks lay eggs that look like giant screws? Another section is a veritable oceanic petting-zoo, where you can reach in and handle some shallow-dwelling creatures such as starfish, sea cucumbers, and, of course, even a tiny shark. Nearby they give short educational talks about various creatures, and there are hands-on displays such as different penguin calls and the bubble- net certain whales use to trap fish.

For those who prefer a bit more land-based fun there are penguins, puffins, and, for a limited time, capybara on display. Part of the habitat is outdoors overlooking the beautiful ocean coastline, and above is a café with a terrace so that you can enjoy a snack with your view. Nearby is a kids’ treehouse, so you can let the sprouts burn off some energy before moving on.

One important thing to mention is, nearly all of the creatures on display at Aquaworld are local. Due to its location at the convergence of the Nakagawa river and Pacific Ocean there are various species native to the region, many of which are on display here. Recently Aquaworld implemented a guidance system in 4 languages (Japanese, English, Korean, Chinese) that is accessible via the Nintendo DS. Upon entering the building you can choose to download the files, and each exhibit has a corresponding number that you enter to hear a short description in the language of your choice. For now you must bring your own but as of September 3rd they will be offered for rental within the building.

Whether you’re 6 or 60, this is a great way to enjoy a day at the beach without worrying about the weather. 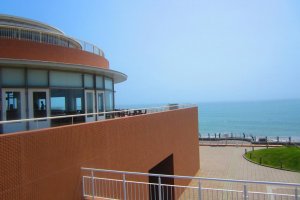 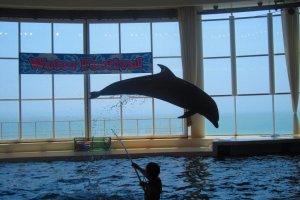 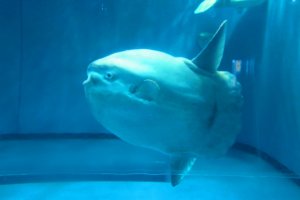