About 500 years ago, a warlord saw in the landscape of Shimosa Province an ideal site for a castle. On one side, there was a river, and on the other, a 30 kilometer long lotus marsh. The clan would need this stronghold because they were living in the Warring States Period, about 100 years of chaos, intrigue and conflict as warlords far from the capital of Kyoto fought for territory and the favor of the shogun. Today, Sakasai Castle is a rare example of a Warring States Period fortification with faithfully reconstructed castle buildings.

The Sakasai clan ruled over their corner of Shimosa (now in modern Chiba and Ibaraki Prefectures) for generations until the rise of the Hojo clan. The powerful Hojo family, based at Odawara Castle, fought and conquered other local warlords, gradually spreading their influence over the Kanto region. Inevitably, the Hojo clan set their sights on Shimosa Province and Sakasai Castle.

In 1536, the castle was captured by the Hojo and the Sakasai warriors were massacred. Woodblock prints of various campaigns of the Hojo testify to their ruthlessness, beheading men and women. In the battle, the clan head Muneshige Sakasai, was killed. Facing the threat of capture and abuse at the hands of the enemy, the Sakasai princess Tomohime cut down the castle’s signal bell with her naginata, the long bladed weapon wielded by samurai women. The bell was a family treasure, passed down through generations. The bell fell over her head onto her shoulders, and she walked into pond in the castle courtyard, drowning under the weight. The pond came to be called Kanebori Pond, the Bell Digging Pond because many efforts were made to dig out the pond to recover the bell and remains.

Records indicate that Hojo leaders had the support of the Fuuma, a clan of skilled guerilla soldiers, sailors, and espionage agents, in other words, ninja. There were several hundred Fuuma ninja members stationed at the castle site. A generation later, the Hojo clan’s fortunes fell with the rise of Toyotomi Hideyoshi, a general who brought to an end the conflicts between warlords. The Hojo were vanquished at Odawara, and their holdings were lost. Sakasai Castle fell into ruin.

In the 1980s, the castle site was explored by archeologists, and in the 1990s, the buildings, walls, and watchtowers were reconstructed with respect to the original foundations. For example, the two-story yagura, a turret, rests on a foundation close to but not directly on the original post holes. The castle also acquired some structures from other sites. The red gate in front of the lord’s residence is from Sekiyado Castle. The Kannondo, a small thatch-roofed pavilion, comes from a Buddhist temple in a neighboring city. The buildings on the site are open, and you can even climb the watch tower to keep an eye out for invaders.

I visited the castle on a sultry August afternoon. The long shadows and the cries of the cicadas made the castle feel forlorn but it was beautiful. If you go in the spring, the castle is surrounded by cherry blossoms. In early October, you can experience a time warp when the castle stages a period recreation of a military campaign. The armored and armed participants conduct a military ceremony surrounded by colorful flying banners and bunting. 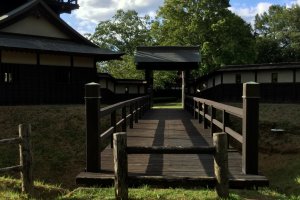 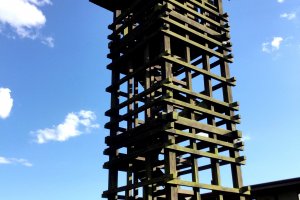 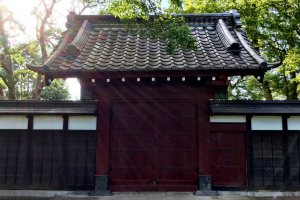 Elena Daurtseva a year ago
I love articles about ancient castles and history, this is so amazing!
Reply Show all 1 replies

Elizabeth S Author a year ago
Japan’s castles and historic houses tell the stories of Japanese history. Visiting these places and learning about them can teach you a lot about Japan’s long and fascinating story.
Reply
2 comments in total