The Tourist Attraction that Isn't

The Ushiku Daibutsu: stunning in its beauty and debacle

The Ushiku Daibutsu is 120 meters (394 feet) tall, making the towering likeness of Buddha the third-tallest statue in the entire world. It is inspiring, awe-inducing, and magnetic. It is an architectural wonder, a sight that would be borderline absurd and unbelievable if it weren't looming over you. And yet...it is one of the most bizarrely lackluster destinations in Japan.

Photos I found on the internet were incredible - but I first heard of it after living in Tokyo for four years. Odd, it seemed, that such a magnificent attraction was so close, but I had never heard of it. Japan does an excellent job of promoting its beautiful, historical, and awe-inspiring sites, so how did this statue not make it onto the cover of any of my guidebooks? Making matters more mysterious was that when I asked Japanese friends about it, none of them knew what I was talking about. Perhaps, I thought, I've come across the last truly unknown mystery of the country. I excitedly decided to investigate.

After the 90-minute trip from Ueno to Ushiku City, Ibaraki Prefecture, I was the only person who got off the train when it pulled into Ushiku Station. "Oh no!" I thought, "I got here too late!" It was already 12:30 in the afternoon, and the smart tourists must have already gotten there much earlier to avoid the lines. That made perfect sense, considering it was a sunny, beautiful afternoon, and surely I would be stuck at the end of a long line waiting to get in. So I dashed through the ticket gates, and turned to head for the bus stop...

...when I realized I had no idea where to go. And not because of my usual natural stupidity, but because there were no signs anywhere. Anywhere. I knew I had to catch a bus, but one side of the station had 10 bus stops and the other had seven. I had expected large signs to point the way toward a popular tourist destination, or at least I could follow the hordes of camera-toting sightseers. Instead, a pair of schoolgirls shuffled past, bored, and an elderly man yawned and scratched at his arm: human equivalents of tumbleweeds.

Now very worried that I had arrived much too late, I went out to search the signs at each bus stop. Each had a long list of locations the bus went to, written all in kanji. Nothing highlighted or with a big gold star next to it. I had the kanji of the Ushiku Daibutsu saved on my phone, and I tried to compare it to every single stop on every single bus line. Nothing. How could this be? It was getting late. There were no people waiting anywhere. I ran through all the stops again - and at one point, after a panicked half hour, I happened to glance down. And there it was. A single piece of paper in a plastic sleeve, tied around one of the metal signs, which had fallen face-down onto the pavement. A special shuttle bus came to this stop a few times a day, alternating with the regular bus. Could this really be the only notice of where to go? Surely I must be a terribly under-prepared traveler, since all the other sight-seers managed to find it with such an unnoticeable sign.

It was about a half-hour bus ride to the Ushiku Daibutsu. Three other people were on the bus with me. We drove through what can unironically be described as "God's country" - desolate countryside, rice fields everywhere. We finally arrived at the shrine that houses the giant statue.

Approaching the ticket window, I saw two things: a large sign explaining different ticket options written only in difficult kanji, and an elderly woman behind the window whose wide eyes and panicked arm motions indicated a certain level of distress at the sight of a non-Japanese person walking towards her. It turned out there were two types of tickets: a cheaper one to just enter the grounds, and a "set" ticket that also included access to the top of the statue. The bigger issue was the lack of explanation in any language other than formal Japanese. Don't get me wrong: it's unfair to expect English guidance in a non-English-speaking country, particularly in rural areas. But still, how do you build a 120-meter monstrosity in the middle of a rice paddy, and be so unprepared as to lead to panicked arm motions for the mere possibility that international tourists might be interested in visiting?

Entering the grounds, though, gave me the sense of awe that I came all this way for. The entrance is on the far end of the grounds, with a long, long walkway leading directly up to the statue. From far away it seems gigantic. With each step closer, it seems impossibly tall. Walking towards it through the park, one feels small and insignificant, filled with a combination of calm serenity and a desire to be a better person. Walking in utter solitude, one is struck by...wait a minute. Hang on here. Why am I completely alone? Where did all those people go that came in the gate at the same time as me?

Ohh, there they are. The Japanese visitors were all gathered around a little koi pond filled with ducks and turtles, enthralled, tossing bits of bread they purchased from a small vending machine to the animals and squealing with delight when they ate them up. High-pitched exclamations of "So cute!!!" rang out from among them as they gathered around the small pond, their backs to the imposing 36-story stone god whose shadow they were engulfed in, not noticing or caring, particularly. There were cute ducks to be cooed at, after all.

The inside of the Buddha was interesting. Taking an elevator up to the top, there were several floors of displays and exhibits to enjoy, while being able to peak out through the observation windows at the vast world below. There was a wonderful pictorial guide to the Buddha's life events in India, and a room absolutely filled with uncountable golden Buddha statues that sparkled like magic. With each exciting discovery, I began feeling more and more glad that I had taken this day trip.

Feeling better, I began rationalizing the attention on the fish pond as I walked out of the statue. A koi pond is a beautiful sight, and is not uncommon or breaking in tradition with what you might see in other Japanese shrines. In fact, it might be in-line with what you could expect to see in a traditional-- wait, what's that over there? Is that...no, it can't be...is it....a petting zoo? Yes, yes it is. There's a petting zoo inside the shrine, by the statue's exit. A petting zoo: certainly a sign of great faith in the world record daibutsu's ability to draw visitors.

Boarding the bus to return to the train station, the day's events were summed up nicely by an Indian family who was apparently as confused as I was. They approached the bus driver and asked whether there was anything more to do or see around here, before they headed home. Ah, there certainly is, replied the bus driver. Not far from here, there is a large outlet mall that many people come to see. The Indian family looked at each other and just got on the bus, apparently deciding that discounted American sportswear wasn't what they were looking for to put the finishing touches on their trip to a gargantuan religious idol.

The Ushiku Daibutsu is a baffling place. What could - and probably should - be one of the most magnificent and attractive destinations for travelers is largely an unknown, and after visiting it I understand why. Where are the nice restaurants, the street hustling tour guides, or the overpriced souvenir shops that are found in major attractions? Where are the eager English-speaking staff members waiting to assist foreign visitors? For that matter, where are all the visitors? At the petting zoo, no doubt, or perhaps the shopping mall. 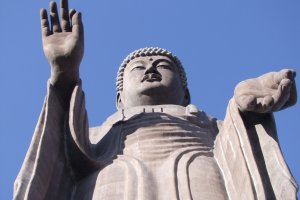 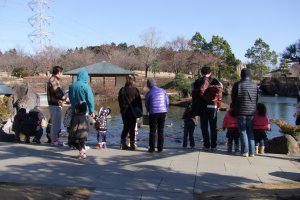 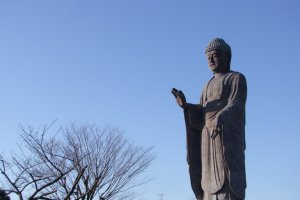 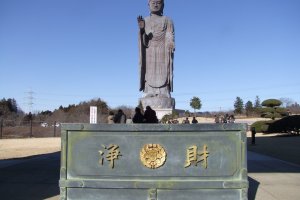 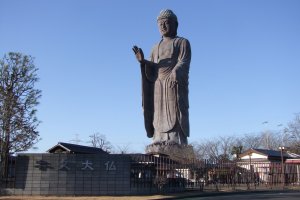 Sherilyn Siy 11 months ago
Entertaining account! Thanks for sharing!
Reply Show all 0 replies

Jerome Lee 4 years ago
Hahahaha...what a great, light-hearted read for a Monday morning! This is one of those places that are so remote that elderly Japanese women just freak out upon sighting a non-Japanese person - love that description!
Reply Show all 0 replies

Terrie Lloyd 5 years ago
Ha, ha... this had me smiling as well. A giant Buddhist statue that no one knows about and which is stuck out in the rice paddies of Ibaraki. I especially liked your descriptions of the "human equivalent of tumbleweeds" and the little old lady freaking out on seeing a foreign tourist. Sounds like Ushiku Daibutsu could do with a bit of polishing/training from the team at the Japan Tourism Agency. Then again, how many similar exhibits are there around the country?
Reply Show all 0 replies

Takako Sakamoto 5 years ago
LOLOLOL!!! Nicely written Todd. This is TOO FUNNY! and it also reminded me of a big Buddha statue in Fukui which nobody visits.
Reply Show all 0 replies

Cathy Cawood 5 years ago
Great article, Todd. I was laughing out loud, and you also made me want to go and see this particular giant statue!
Reply Show all 0 replies
6 comments in total