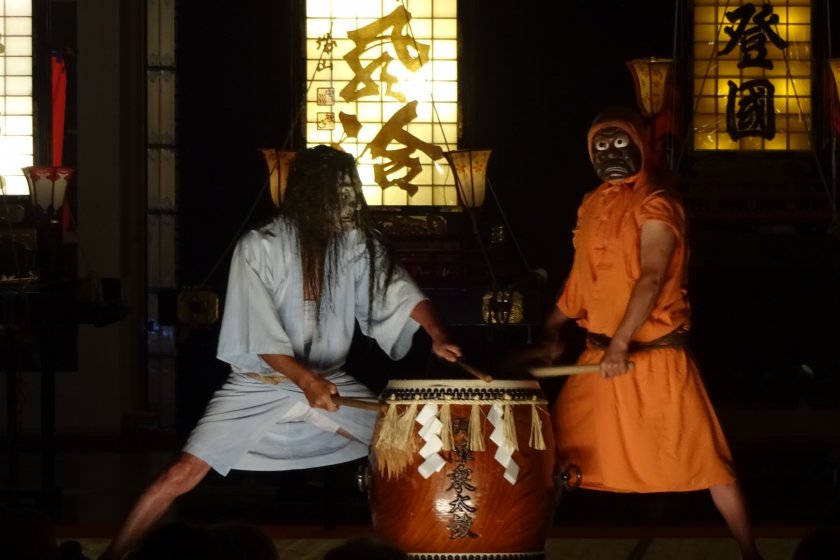 Taiko (Japanese drumming) is usually a great spectacle at summer festivals around Japan but nowhere is it wilder than on the Noto Peninsula. Lovers of taiko will enjoy this crazy style.

Gojinjo Daiko (御陣乗太鼓) is a type of taiko that is specific to Ishikawa Prefecture. It has its roots in the Nanao area, Nabune-machi. Taiko drummers wear masks, a gear and a hairdo that makes them look grim and fearsome.

Gojinjo translates a setting up military camp, and the story goes that Lord Uesugi Kenshin’s armee invaded the area in the 16th century with the intention to capture Nanao Castle.

The villagers, all fishermen and farmers, wanted to defend the castle and chase the alien forces away but they had no weapons. They came up with the idea to use what they had and to look as scary as possible. They made scary-looking masks from tree bark, and they added seaweed dangling down their heads instead of hair. They used farming tools, such as hoes and sickles, as weapons. They must have looked like angry ghosts when they fell into the samurais' camp, but their strategy was successful. They managed to chase away the invaders.

To commemorate the brave action of these simple villagers fighting a well-trained army taiko performances imitating the battle on stage are now held at several shrines around Wajima as part of summer festivals, for example the Okutsuhime Shrine Festival and the Juzou Shrine Festival.

The taiko drummers are all men. They move around a single drum and try to look as fierce and scary in their outfits as possible. Their drumming is vigorous and dramatic, even wild at times. The powerful drumming is accompanied by frightening battle cries and jumps. If the villagers at the time were determined to beat the hell out of their enemies, so are the drummers today beating the drum to entertain the crowds.

With over 400 years of tradition, Gojinjo Taiko is a valuable cultural asset. It has been designated as “Prefectural Intangible Folk Cultural Asset”. Performances are rare but summer is a good season to catch an open-air Gojinjo Taiko performance.

One more reason to schedule a holiday on the Noto Peninsula in coming August! 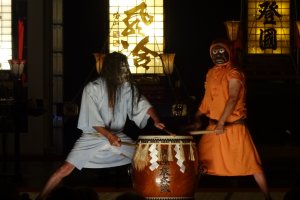 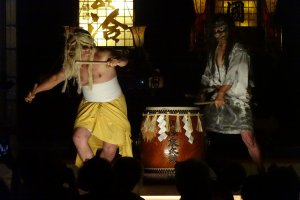 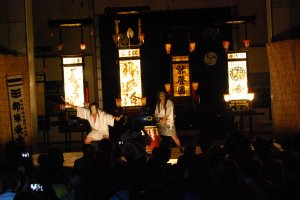