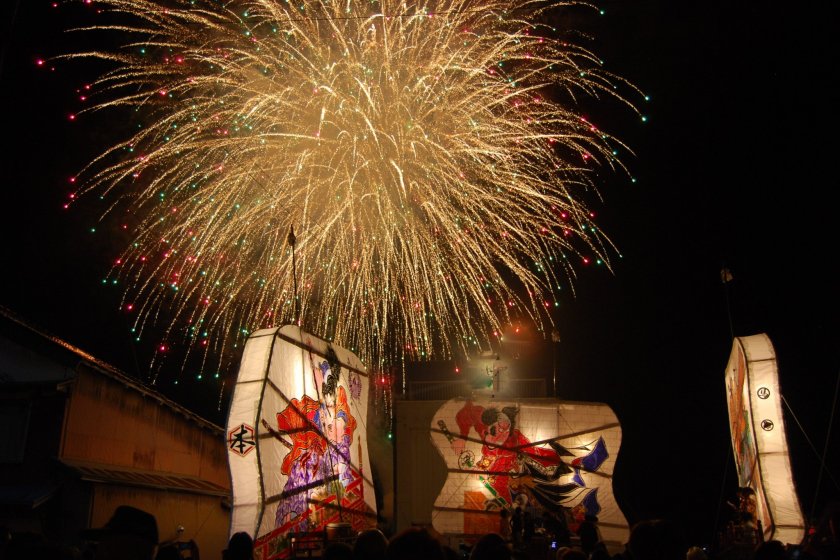 Colorful floats at local summer festival on the Noto Peninsula

You might have heard of Kiriko in Wajima but do you know Niwaka? A procession of colorfully painted floats marks the end of summer in Ukawa, a fishermen’s village on the Noto Peninsula. This is the time when the locals give thanks to the gods for a good fishing season. Like many summer festivals in Japan, this festival is related to the local shrine, Sugahara Shrine, and the whole local community is involved.

Niwaka is a type of Kiriko lantern. Whereas Kiriko are long and slim in Wajima, Niwaka in Ukawa Village, now part of Noto Town in Oku Noto, are more roundish (7m x 5m) and they feature colorful paintings.

In particular, Benzaiten, one of the Seven Lucky Gods, is prayed to for a good catch and an accident-free season. Locals say that Benzaiten selects one of the warriors painted on the Niwaka during the climax of the festival in front of the Benzaiten Shrine which is a taiko competition that lasts from midnight until 3 am.

The story goes that Niwaka, which literally means “unexpected”, was built and decorated by locals in Ukawa Village when they expected Lord Maeda, the daimyo (over-lord) for this area. The Maeda Clan was one of the most powerful samurai clans in Japan during the Edo Period (feudal period). They were the Daimyo of Kaga Domain, nowadays part of Ishikawa Prefecture, and they had their castle in Kanazawa.

In the middle of the 19th century Lord Maeda, the 13th, was on his round of inspections and passed through the area when the locals held their annual “harvest celebrations”, a festival that is reaching back about 400 years. They wanted to surprise their Lord and created these large, colorful lanterns.

The lanterns are decorated with paintings of warriors. The criteria for choosing the motif are to depict powerful and handsome warriors. The Niwaka are painted anew every year. It takes two months to complete the painting. Each is a piece of folk art.

Next local boys and girls in typical festival outfits gather near the Niwaka. They take turns beating taiko drums for a while for spectators to enjoy.

Around 8 pm the locals enjoy fireworks that brighten up the night sky just behind the shrine. The fireworks add even more light and atmosphere to the place where the colorful, illuminated Niwaka wait to be taken around.

After the fireworks, the procession of Niwaka starts at around 9 pm, and it continues until the early morning of around 3 am. The large cards and lanterns are moved one by one past the shrine and then in the opposite direction along the small roads of the village. While the starting point was Sugahara Shrine, the finishing point is Kawase Shrine.

Niwaka Matsuri takes place every year on the fourth Saturday in August. Preparations are going on throughout the day, but celebrations begin after dark. The nine Niwaka are lined up in front of Sugahara Shrine. Each Niwaka consists of a movable wooden base with wheels and a large lantern on it.

The doors and windows of many traditional townhouses are open and visitors can observe the locals enjoying dinner with family members and friends. Walking through the village one can feel a jolly and exciting atmosphere building up. During the procession, the inhabitants of the houses come out and join in or sit in front of the houses to watch the spectacle. There are about 4,500 inhabitants in Ukawa and about 2,000 guests join the festival each year.

Compared to many other summer festivals in Japan, the Niwaka Festival is very local and most of the attendants are members of the community and friends rather than guests. With no big crowds like elsewhere, and the Niwaka fireworks close up, this festival is truly a unique experience for foreigners to witness.

It takes some time to get to Ukawa, but the effort is well worth it. The easiest way to get there is by rent-a-car, but there is a local bus running twice a day from Kanazawa City to Suzu City, on the most northern tip on the Noto Hanto, which passes through Ukawa (2 hours). 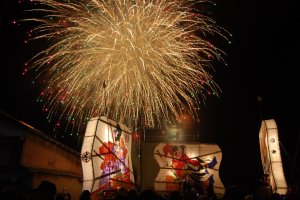 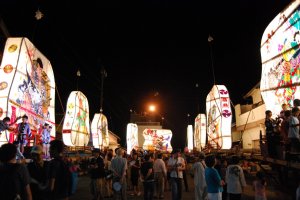 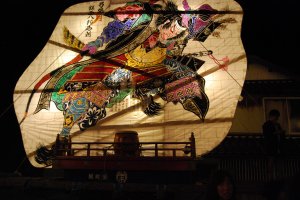 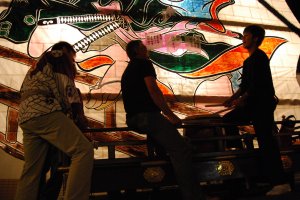 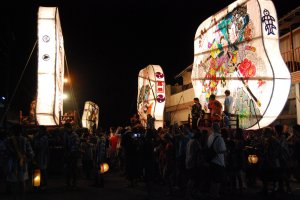 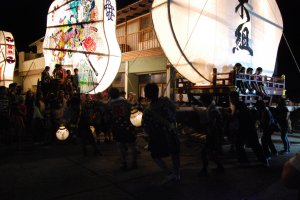 Elizabeth S 2 years ago
Really amazing lanterns! I love the organic shapes and the great detail.