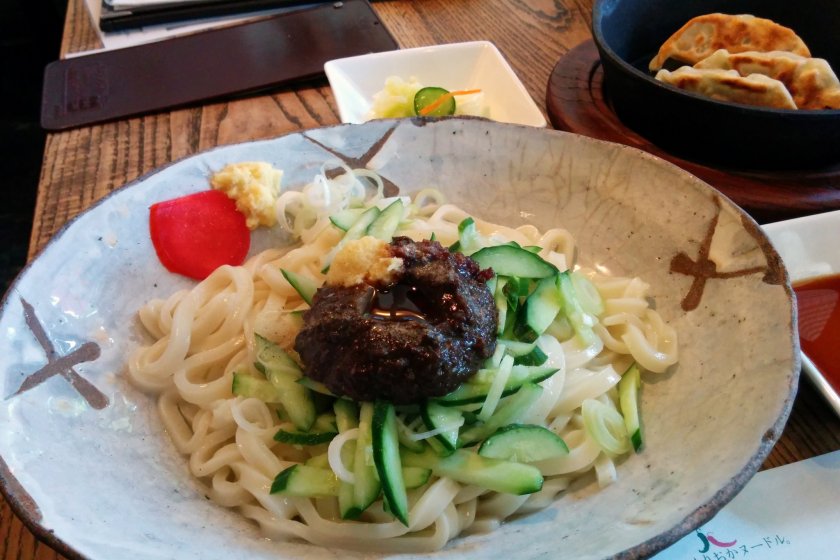 Serving up one of Morioka's specialty noodle dishes

Jajamen before mixing the meat-miso spicy goodness into the noodles

Even if you can navigate your way around town with a map or online to most tourist destinations, there is nothing better than asking the locals for restaurant recommendations. So that's what I did at the tourism information counter inside JR Morioka Station. Looking to sample some local cuisine for my first meal on vacation, I followed the recommendation to Hot Jaja. The restaurant specializes in Jajamen noodles. This Morioka delicacy originally developed from a Chinese dish with udon noodles, but Jajamen includes a meat and miso based sauce. The restaurant has a decent selection of drinks, salads, and some other small dishes or entrees, but I know what I came for--or so I thought.

I sat down in the non-smoking section, a healthy distance away from the then unoccupied smoking area, then opened the menu. A friendly staff member which spoke a few words of English greeted me and seemed happy I was set on indulging in a local delicacy. There are a few lunch sets all hovering about 1000 yen in price. Being a big gyoza (fried dumpling) fan, I settled on the gyoza set. After gazing around at the country decor a few moments and updating social media to let everyone know my whereabouts and mood status (hungry!), my food arrived.

Taking center stage is of course the Jajamen. When you order you have a choice of standard or a spicy. I found the spiciness a nice kick to my taste buds, but nothing that had me rushing for water every bite. The staff member asked if it was my first time eating Jajamen, then explained how to best enjoy the meal. Basically, just mix in the tangy meat-miso sauce which sits atop the meal into the noodles. You can also freely add sides of garlic, vinegar, etc. The flavor and texture was something unique. It tastes just as you may imagine a meat, miso, and udon dish might taste with a little bit of spiciness mixed in. I found myself scooping the chewy noodles chunk by chunk into my mouth as my slurping skills resulted in the thick sauce to be stripped off the noodle and fly onto A) the table B) the floor or C) my shirt. The Jajamen noodles and rest of the accompanying side dishes in my gyoza set soon disappeared. However, the meal was only halfway complete.

Once your noodles are gone, grab one of the raw eggs on the table and crack it open into the bowl. Throw the shell in the cute bucket resting near the condiments. Finally, push the button on the table to call the staff. A staff member will take your bowl and add hot water in which the noodles were boiled in. Add your own desired amount of the meat-miso sauce and stir well. Presto, it's Chi-tan-tan. This egg soup is very much part of the Jajamen experience and also very tasty I might add. I found myself full and satisfied.

Although there are many Jajamen restaurants in Morioka, this one is a local favorite and easily accessed. From the front of JR Morioka Station, descend into the underground walkway and pop up on the left side of the street directly in front of you. Hot Jaja is a thirty second walk, on your left. 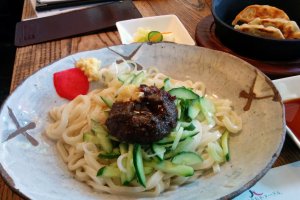 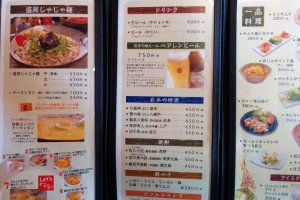 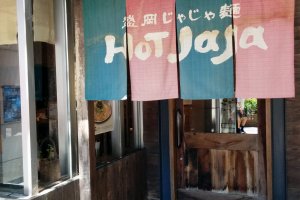 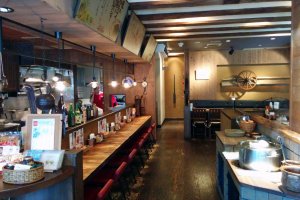 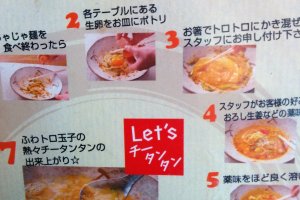 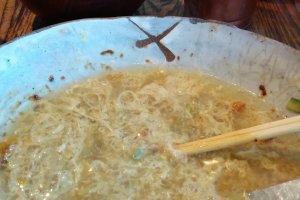 James Clark a month ago
This was the very first place I ate in Japan. I really enjoyed reading your article. I made it to Morioka in September 2019, to start hiking parts of the newly opened Michinoku Coastal Trail. Did you get the chance to check it out?
Reply Show all 0 replies
1 comment in total