From around mid to late June, Kagawa's Sanuki Mannou Park celebrates early summer with their annual Ajisai Festival. The park grounds are home to around 200,000 hydrangea plants which encompass 40 different species, and they are one of the highlights of tsuyu, or the rainy season.

One of the fun things about this festival is that the park rents out traditional Japanese umbrellas (free of charge, too!), so that you can stroll around the park grounds and be elegantly protected from any incoming downpours.

Adult admission to the park is priced at 450 yen.

Sanuki Manno Park is located around 25 minutes from the Zentsuji IC on the Takamatsu Expressway, or 35 minutes from Sakaide IC on the Setochuo Expressway. On-site parking is available and is priced at 320 yen for regular vehicles. 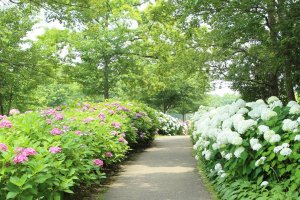 Elena Lisina 2 months ago
Ajisai is so beautiful in Japan, especially blue colored. I'm glad I could catch them in bloom!
Reply Show all 2 replies

Kim Author 2 months ago
They are one of my favorite things about rainy season!
Reply

Elena Lisina 2 months ago
I love gardens on rainy days - no people, all is bright and fresh! Good! :)
Reply
3 comments in total