Gather round at the lunch table at Apron Cafe (Photo: Apron Cafe / JT)

Food for your body and mind in a relaxed courtyard

Apron Cafe Naoshima has a refreshing simplicity that only a child can think of. On the wall there is a drawing of a dog sitting on a chair, looking at the other empty chairs, as if it is waiting for its friends to sit on them. Drawn by the local artist, Keico Oogami, it has references to London designer Martino Gamper’s “100 Chairs in 100 Days” exhibition at the Marugame Genichiro-Inokuma Museum of Contemporary Art (MIMOCA) in Kagawa Prefecture.

The menu was nutritious and effortless to choose from too, with the vegetable curry set menu being the stand out. The day I arrived there was nothing else for a late lunch, it was whimsical in a way that a grandchild can get away with. I can imagine a little 5 year old standing tippy toe in the kitchen, stirring curry in a pot bigger than himself. However, this is purely an adult's version of childhood, one without tears, with the music oscillating between the Carpenters and Bossa Nova, much like a backdrop to a Haruki Murakami novel.

In many ways it was the unexpected that took me by surprise at Naoshima. I was expecting to find nothing at Lee Ufan Museum, but it was the something as well as the nothing about Mona-ha art, which is also called the school of things, that made me reflect about creating moments in time. Likewise it was the cactus like leaf hidden in the salad that caught my eye. Expecting it to be dry or bitter like the Rosemary that it resembled, it was juicy and tender with a crunchy skin. Kissed by Shodoshima olive oil, which itself was fruity and alluring, with just a sprinkling of sesame seeds. I later found out that the plant in question was called “ice plant”, with small crystal like fibers that look like ice crystals. It is full of isoflavones as well as vitamin C, and is reputed to have anti-aging qualities. The menu here is designed by a nutritionist, so you can be assured of a balanced and healthy diet here. Besides the ice plant, there was an orange slice that was as sweet as the one I experience on JAL’s first class menu. The tomato exploded with flavour, slightly herbal, botanical and yet sweet.

The Chana Masala or seasoned chickpea curry was spicy but not too spicy to burn your palette, though it was quite strong compared with the black kernel rice. If there was any thing I would change I would have a smaller pot of curry, a second serving of rice will make you too full. In Japan the motonai culture means that I can't stand leaving food unfinished.

Apron Café is also known for its Seasonal Special Lunch set, which for ¥1500, you can try artisan fare such as locally sourced Spanish Omelet with bamboo shoots, cheese gratin with Chicken and Spring Cabbage, Shiitake Mushrooms and Quinoa, or freshly harvested and roasted potatoes with spinach & walnuts dip.

The DNA of Apron Café is closely connected with the global creative community. The owners Maki and Yoichi have a unique vision and connection with artists and designers from around the world, complimenting their focus on nutrition and seasonal ingredients which are sourced locally.

In Japan, until recently it was difficult to find a restaurant or café open for breakfast, besides the standard thick toast and brewed coffee that passes for breakfast in the chain house coffee shops. Thankfully with the opening of Apron café on Saturday and Sunday mornings, the joy of a delicious breakfast in the courtyard is now available in Naoshima, making the breakfast and brunch culture a reality in this part of Kagawa. The café takes the paddock to plate concept to the next level, as Yoichi also works at Sola Shio, the local salt maker, a its namesake reflecting its 100% solar powered energy source. Try the Naoshima sea salted butter and sweet summer orange jam with their cranberry and coconut scones.

Apron Café is located in one of the narrow pedestrian only alleyways behind Honmura village, close to the Ando Museum. Look out for the Abake Studio designed black wood façade and café logo, and discover a slice of international cuisine, infused with Japanese sensibilities. 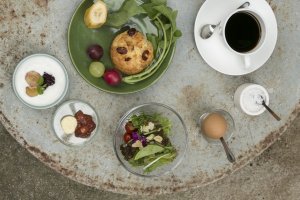 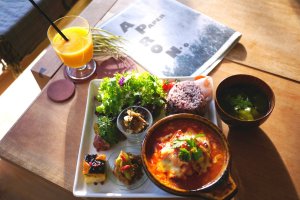 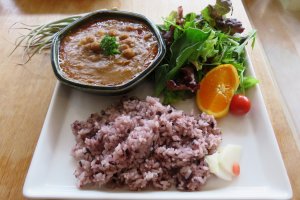 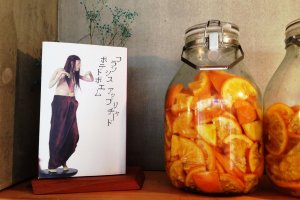 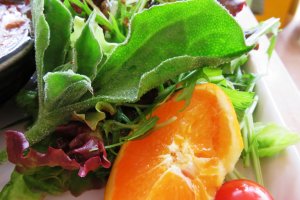 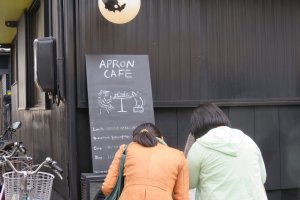