Time Out in Naoshima

A reflection on time and space

A moment in time. What does it mean? While art and sculpture can express itself in three dimensions, how do we articulate the fourth dimension, something as intangible, yet essential to nature and the human existence?

At his namesake museum, Lee Ufan tries to articulate the fourth dimension in a single brush in the work With Winds (1990) as if this is all you can see in a second of elapsed time, with the wind itself making a brush stroke across the canvas. In the same way that the wind will leave a trail by blowing some leaves, Lee imagines the paint strokes as if the wind had painted on the canvas. For people brought up in the West, who had always thought that nature is inanimate, the stories that underline these art works can be quite a revelation. Devoid of the other three dimensions, it is a meditative piece with a supposedly blank centre drawing us in. How do we distil time, or life itself into a single brush stroke? We may not understand the complexities or the lifetime of thinking and reflection that went into this work, but we can meditate on it in this space.

Lee Ufan is a member of the Mono-ha school, which is also called the school of things, one that emphasises raw materials, like rocks and glass in their natural state, and our relationship with it in a spatial manner. I walk amongst his sculptures and the set up of the museum draws me closer and then pushes me out, allowing me to reflect on my spatial relationship with it. Set in an isolated and untouched part of the island, towards the end of a winding road from the ferry wharf, participants are invited to leave their emotional baggage behind, and let the museum draw you in through a long walkway to the temple. Before long, I am struck by the sight of a towering concrete pole Relatum-Point, Line, Plane (2010), like a long sundial, casting shadows as well as a being a focal point in this amphitheatre like space, along with the natural stone and steel plate that forms part of this installation. My relationship with the pole changes as I move in closer and then further away, and like many of his works, its impression changing as move around it. The essence of Mono-ha is that the viewer becomes a participant, interacting with the material objects, rather than just passively viewing it. Lee himself wrote about his wish to present “the world as it is”, rather than imposing his interpretation on his viewers. Like the stone garden in Ryoanji, his work draws you in, and its interpretation varies with the time and angle in which you see the work.

The museum is made up of a number of rooms, each one slowly drawing you into a state of encounter and meditation. The kanji used for the word room itself is telling. For example, Shadow Room is translated as 影の間 – but the word 間 can also be translated as the word “ma” or space. Actually the phrase 影の間 can be translated as “between the shadow”, "during the shadow", or even "amongst the shadow", which better articulates the artist’s desire that we encounter with it, and not just enter a room to view it. It may be said that we can better see light when there is shadow, which itself is a “negative space” for light.

The concept of ma is also used in music. It is the silence of the reverberation of the bells that you can reflect on its sound, a space where the distractions in your mind is shut out. The negative space exists in music as wells as art. When you enter into the silence, there is a special space where you can encounter with the art work itself, or as Lee said, an encounter with the world as it really is. It recalls the Buddhist concept of Sanyata, which is not nothingness, but rather the nature of existence.

Another element of time which Lee speaks of is in the stones themselves, created by nature over millions of years, even though we may give them only a moment’s notice. To make the concept of time more obvious, there is in the Shadow Room, a projection of time itself, with images of the moon, waves and oceans, images that are highly evocative of memories, in a way that doesn’t require any cultural or educational context.

From Osaka or Kyoto, take a bullet train to Okayama, transfer to a local train to Uno Station, and then it is a short ferry ride to Naoshma. Foreign visitors should take advantage of the Kansai Wide or Japan Rail Pass to Uno Station. 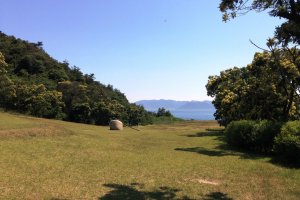 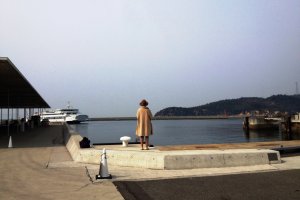 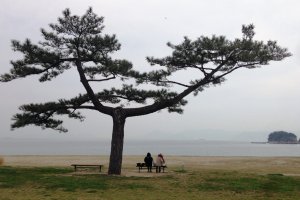