Okuboji has rather nondescript origins. Kobo Daishi only carved the image of the main deity, and enshrined it with his own walking stick. It is named Large Hollow Temple, because, well, there was once a large hole here. Okuboji Temple 88, however, is also Kechigan-sho, where one completes the pilgrimage, however it was travelled, and in whatever state of heart.

This is Okuboji’s meaning and significance. There are no henro kissing the ground, no drum rolls and clashing of cymbals, no need for these, or anything else. The sheer impact of being at Okuboji and all it implies, all it means, all it signifies, is sufficient. This includes the personal meaning the temple will have for each pilgrim.

Okuboji is the last henro temple in the Kagawa region and so became Temple 88. Such a specific number of 88 temples, though, couldn’t have come about with a throw of the dice. The number 88 was actually already mentioned in a 1689 detailed guidebook of all the 88 temples, with the writer stating he had no clue why they numbered 88. One explanation is that 88 is a lucky number, and believe me, luck is a necessary blessing on this pilgrimage.

Earlier than 1689, it was mentioned although briefly in Murasaki Shikibu’s Tales of Genji around the 11th century. One theory speculates that we have 88 evil passions, and so we need to go to 88 temples to eliminate each one. The number is also the total of all our unlucky ages, women, children, and men. But this would make 88 a not so lucky number. A more plausible reason is practicality, 88 temples being what people in those times could manage in the spring months of travel.

Okuboji is embedded against the backdrop of Mount Nyotai, a compelling setting suitable for the ancient temple, founded in 717, especially clouded with the holy smoke of incense, candles, a fire burning, and so crowded with henro and other devotees, there was a queue to leave your name card and take a photo.

The temple grounds are studded with many historical monuments, pedestals, stones and boulders all contributing to the atmosphere of respectful awe. The giant straw sandals at the entrance are symbolic of the henro and our prayer for strong feet and bodies. These are found in other temples, too, as are the two demon Gods guarding the entrance to Okuboji to ward off evil.

Okuboji was among the first temples to allow women to climb mountains that led to sacred sites. I did not see any pilgrims leave their staff behind, as is the supposed ritual, although I did find a whole room with hundreds of staffs enclosed inside, but they did not look used. All the henro seemed serious. On the bus going back filled with henro, they all looked gloomy, and so was I.

While 88 is the final temple, one completes the journey where one started. I completed mine at Ryozenji Temple One. To quote TS Eliot from Little Gidding, I am still the same, Knowing myself yet being someone other. According to Eliot again, we undertake journeys not to verify, instruct ourselves, or report. We are here to kneel Where prayer has been valid. Absolutely. This is the Shikoku Henro. 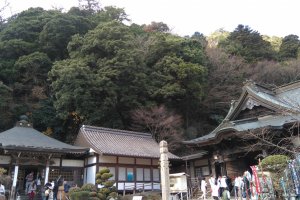 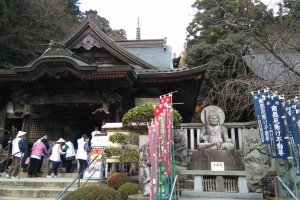 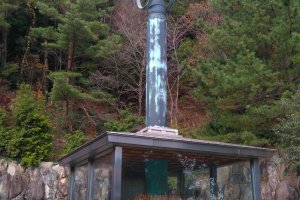 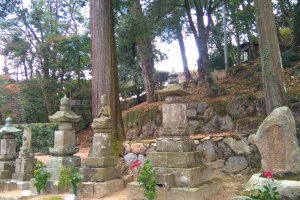 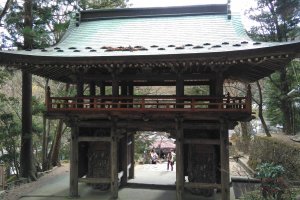 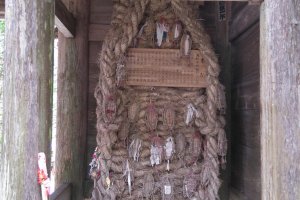