Takamatsu in Kagawa is where Henro can see the end coming. But this could be a hard end. Most of the goodies are of course up a mountain slope. Great to look at when one reaches the destination, but a pain to get to. It involves, from Takamatsu, a change of train lines, buses, a cable car, all with long waiting intervals in between. Walking henro will stretch themselves through long distances of steep climbing. I passed a struggling pair on a bus up a mountain. I wished the bus driver had stopped and just given them a lift. Those pilgrims will definitely get to Nirvana!

Ichinomiya Temple 83, Yashimaji Temple 85, Shidoji Temple 86 and Nagaoji Temple 87 were my temple countdown before Okuboji 88. Ichinomiyaji, as the first of the last of my temples, made my heart skip a little. It was the usual beauty of a temple, which I have now become so used to, and anticipate. I thought it might be dedicated to children, because there were a lot of toys left at some of the juzo shrines, including a heart breaking teddy bear. I noticed some tori gates, and seemingly, if you crawl through them, you will be cleansed of all bad karma.

Yakuriji was a no-no, too long, too far, too steep, involving a cable car and all... does it matter? I guess I’m not getting to Nirvana. Yashimaji was a dream. The bus from the train station cut through the steep mountain dressed in its last flames of red to the Main Shrine, vermilion lacquered and bright, with walking trails enjoyed by daily exercisers. Different at Yashimaji were the statues of Badger Gods. These Gods of good business can be seen outside restaurants but are also Gods of happy families, and overall good luck. The temple is one of the richest on the island.

On the trip to and from Shidoji, the Kotoden went very close past the sea, slanting to one side. Just a brick wall separated the train from the edge. The same as it skimmed past houses, where if I put my hand out, I could touch the walls, and hopefully no one does. ​Shidoji’s alias is The Temple of Fulfilling One's Wish. I think everyone wishes here they were at Okuboji, especially if they were walking. From Shidoji to Nagao to Okuboji would be a mere uphill trek of just over 20 km, just over 10 hours.

Nagaoji was on flat land (how unusual!) forming a panoramic picture with three shrines adjacent to one another. I imagined Nagaoji feeling a little down. Actually it did have a subdued feel about it, as though it knew it was just the last temple one had to go through before the one they really wanted.

And that was that. With a sense of unreality, I boarded the bus for Okubuji Temple 88. 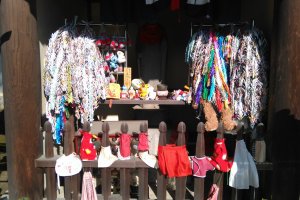 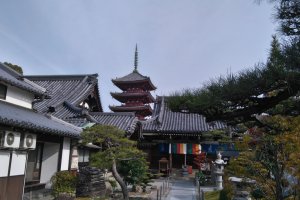 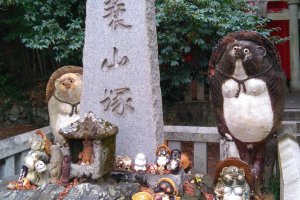