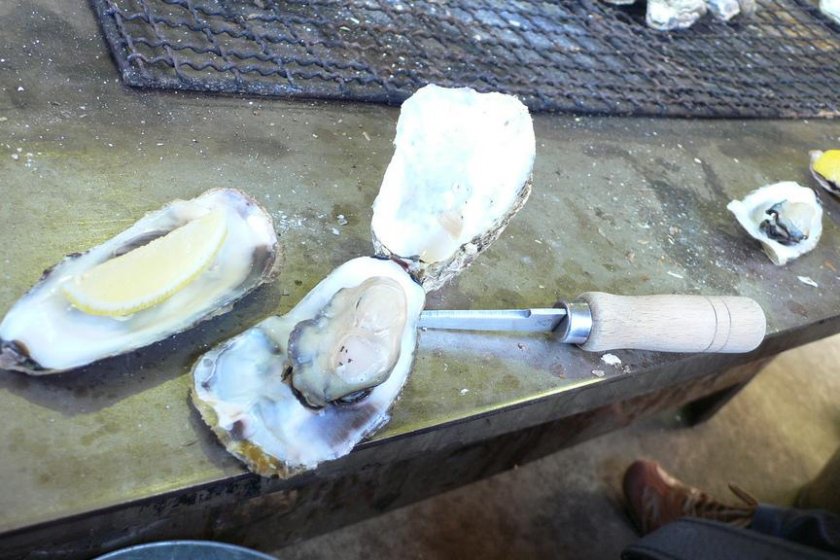 Grilled oysters in the outskirts of Takamatsu

It was a cold, grey Tuesday evening when I took a train to Hara, almost at the far end of the Shido Kotoden line, with some teachers, and walked the dark streets to Kamakura.

I had been invited the previous week, with apologies for it being a Tuesday night because Saturdays were booked up until March.

With that in mind, I couldn’t have been more surprised when we entered the simple room with its concrete floor and unadorned walls. The room had about six large, metal tables scattered around, with groups of people sitting around them.

Some of the members of our group had already arrived, so we pulled up benches and stools around our metal table, which was beautifully hot.

I accepted a beer from the cooler bag one teacher had brought, noting that this was the first time I had seen BYO in Japan, and we kanpai-ed and otsukaresama-ed, but no one made a move to order food, or call a waitress.

I didn’t really understand what was going on until a timer went off near my head, and a woman in an apron pressed a button which lifted a metal lid out of the middle of our table by way of a pulley.

Inside was a grill, about 1.5 meters squared, filled with oysters.

The woman began passing them out to us with long tongs, and we tucked in, using the knives we’d been given.

They were delicious; some people had bought sliced lemons and bottles of ponzu (vinegar), which we poured over some oysters, but mostly we just ate them plain, throwing the shells in buckets under the table.

When we’d emptied the grill, I was surprised to find that it was refilled from the chute in the wall where they were being tipped in from outside, by way of a large shovel.

“Hai,” she laughed at my obvious surprise. “About five times.”

The grill was filled, the lid was lowered on its pulley, and the timer was set again.

We drank beer and talked while we waited.

It seemed that I was the only one who had never been here before; all my colleagues had been here at least once, and it is quite famous as the place to go if one is a fan of oysters.

Also, maybe my Japanese is worse than I realize, but I think they were telling me that the owners have a horse living out the back.

The second batch of oysters were ready, so we applied ourselves to eating them; the woman with the tongs making sure there was always at least one on the narrow counter in front of each of us.

As predicted, this happened several more times, until her query of “will you eat more?” was finally met with a loud “no!” and some demonstrative hand gestures.

The meal ended with small bowls of kakimeshi (oyster fried rice) and miso soup, which meant we had tried every item on the very small menu.

The price was set at ¥3000—which seemed quite reasonable to me considering how many oysters we’d devoured—so we paid up and thanked the friendly proprietors.

Then it was back out into the cold night, happy and full of oysters. 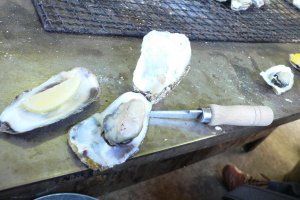 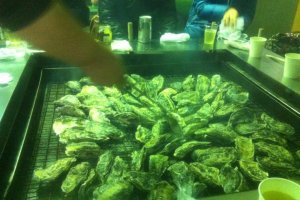 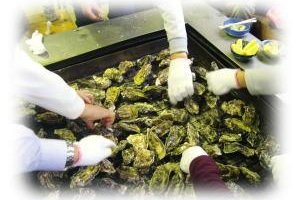