Temples, shrines, and gardens - In praise of plum blossoms 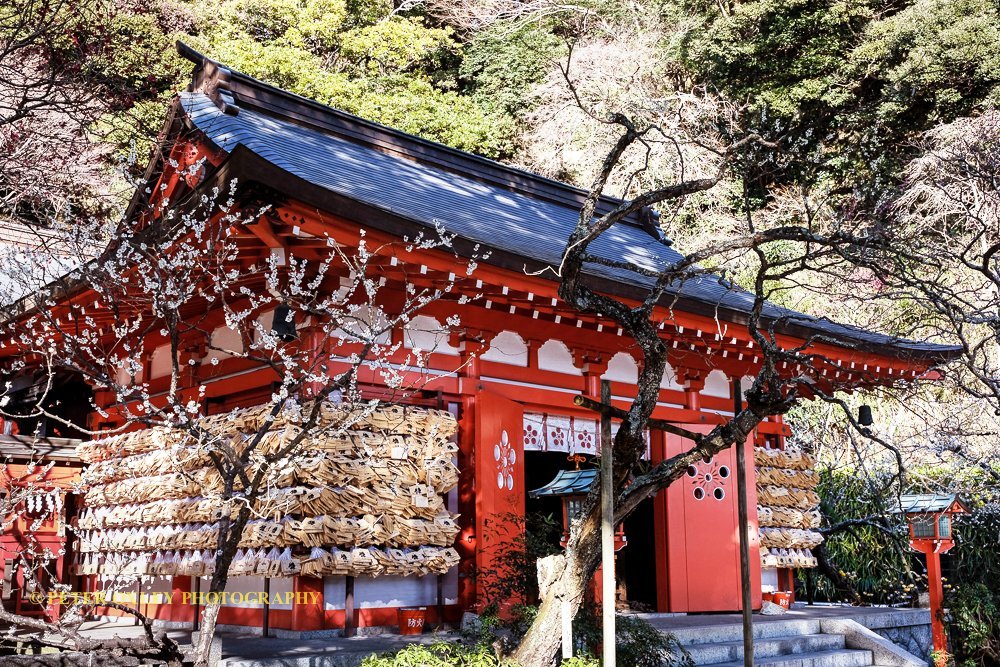 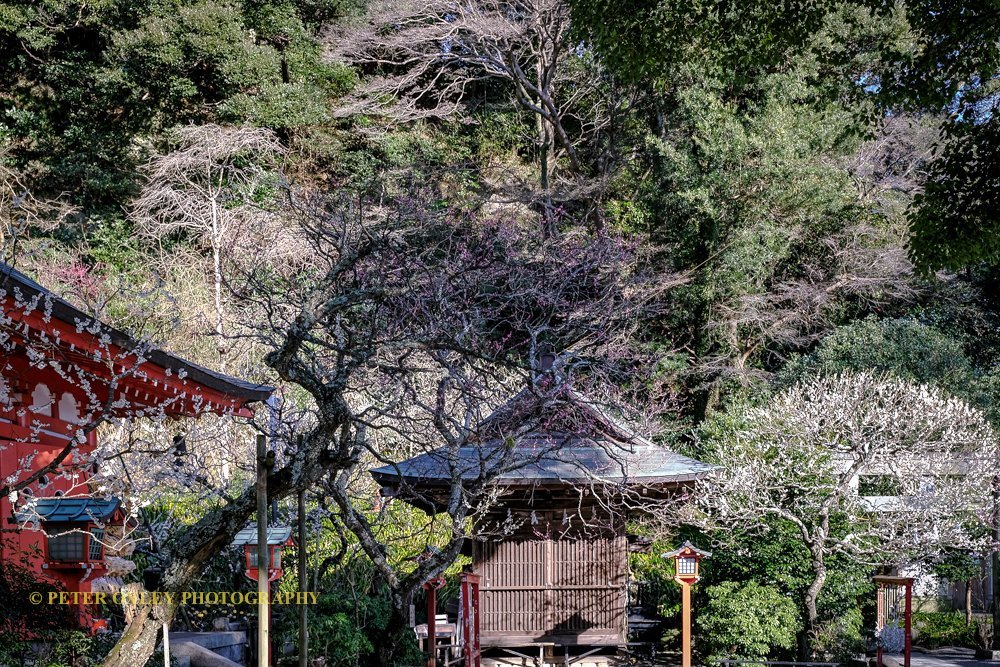 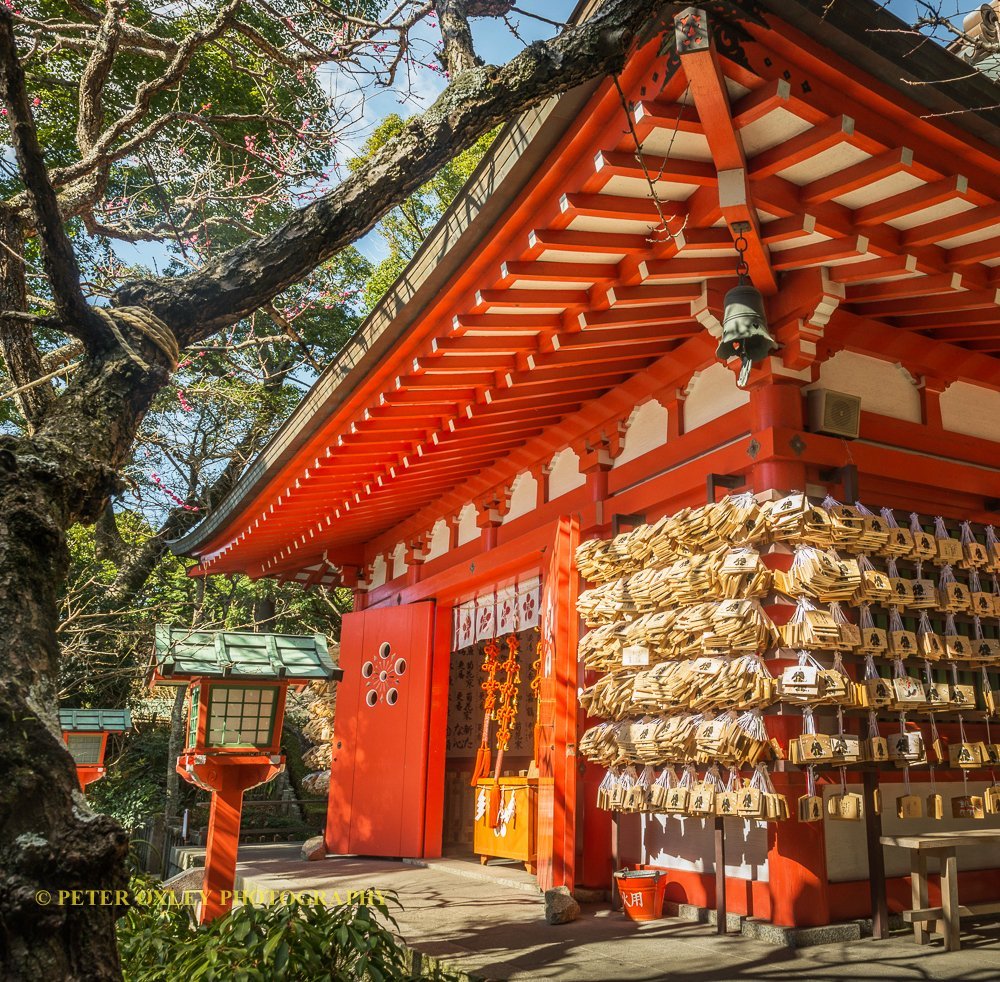 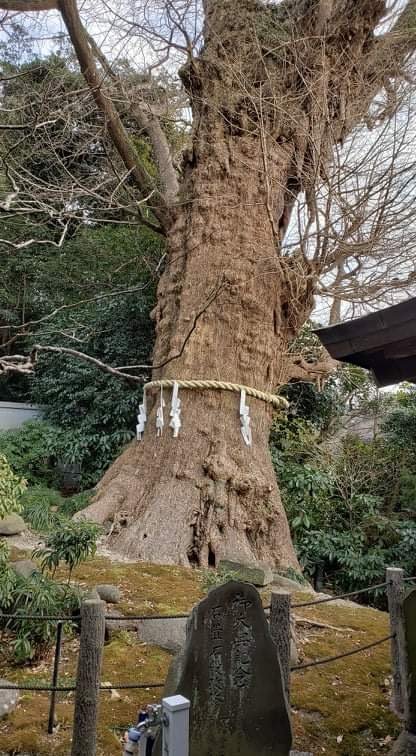 The trunk of a centuries-old ginkgo tree 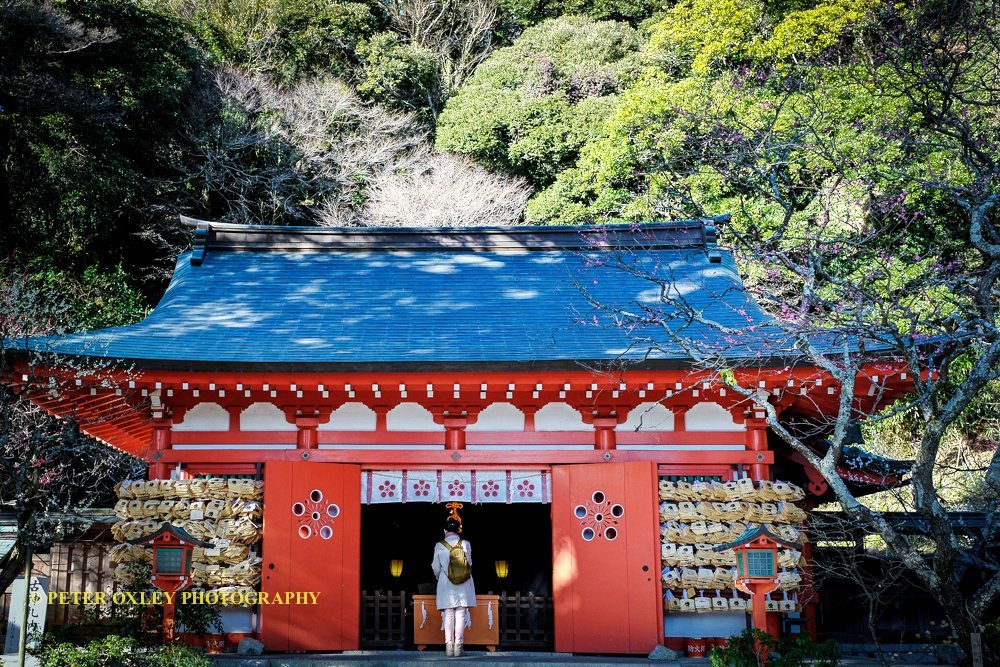 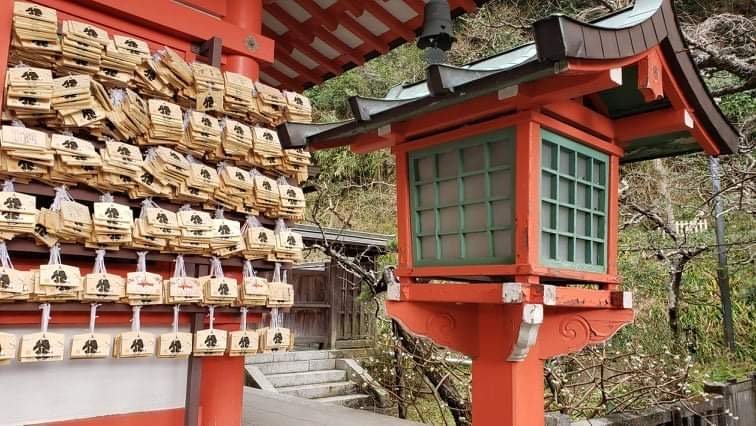 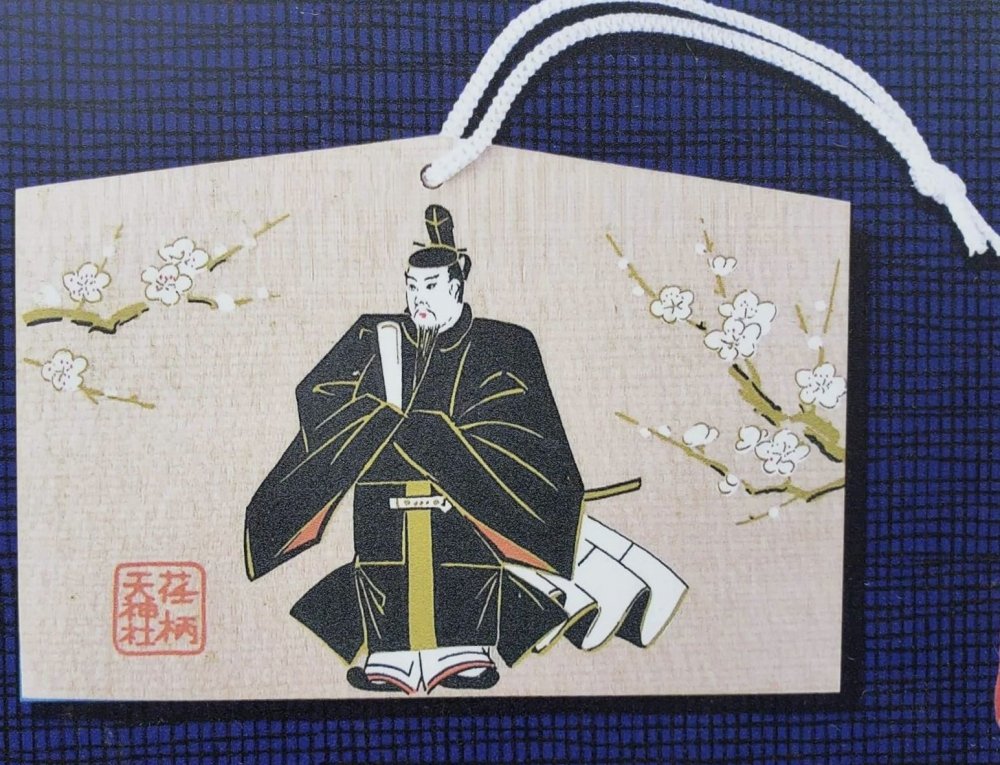 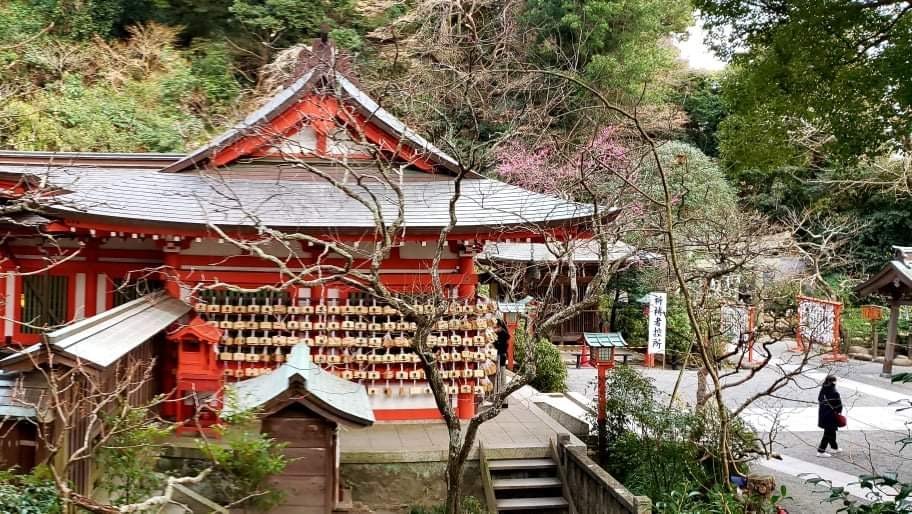 A view of the shrine complex 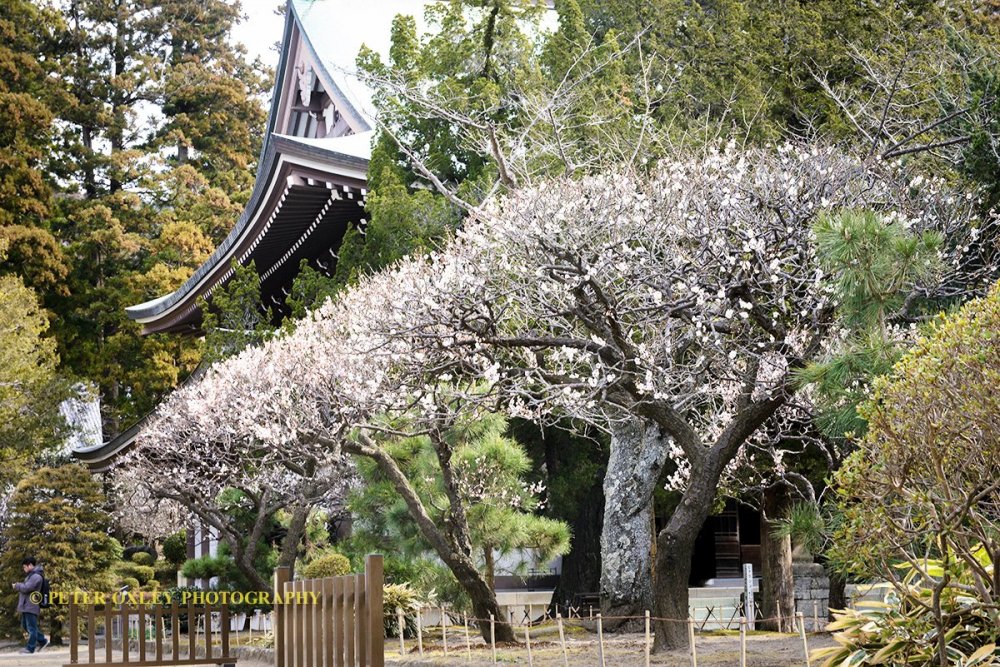 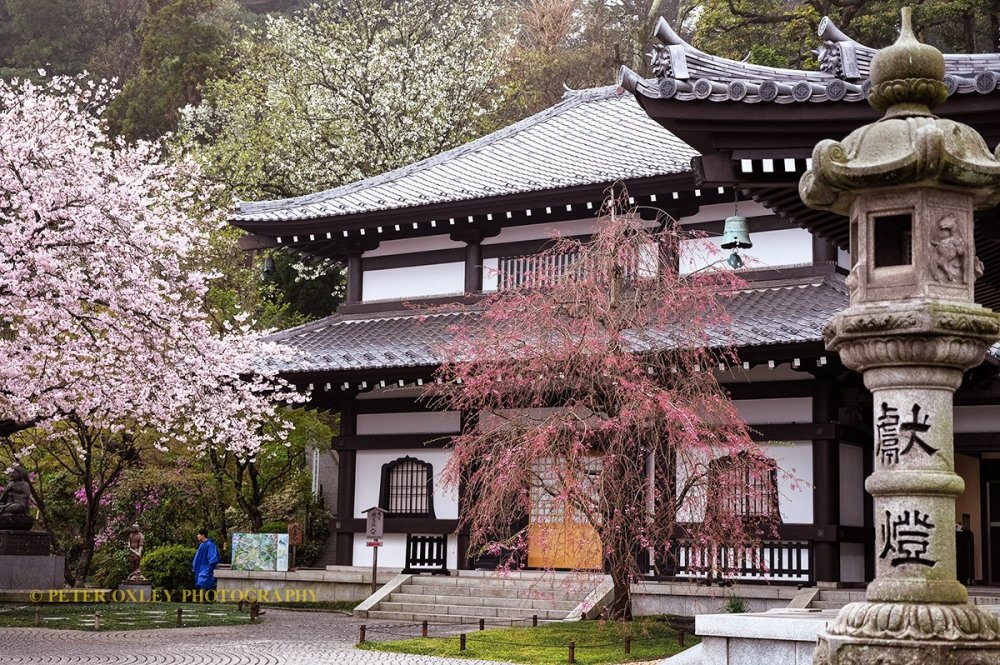 Plum on the right and cherry on the left, Hasedera 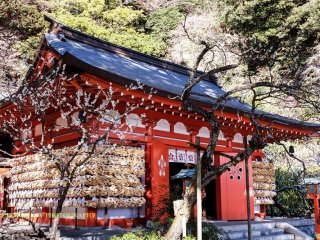 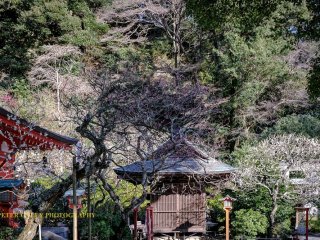 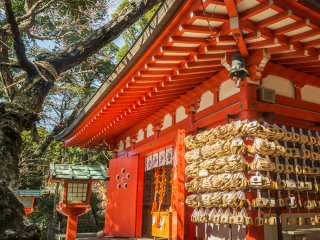 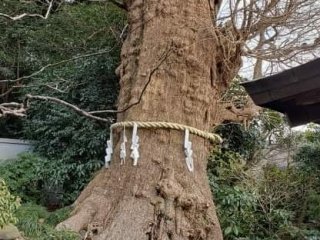 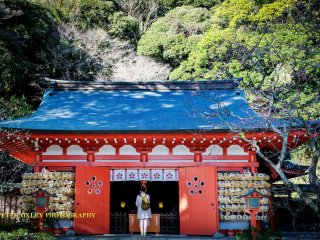 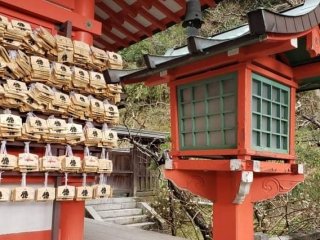 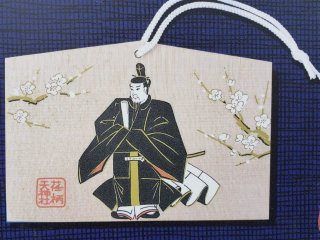 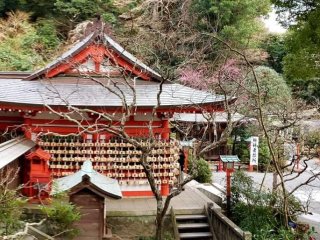 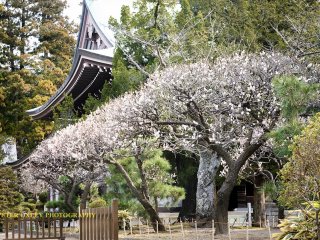 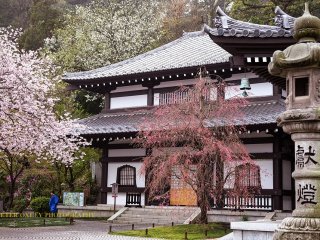 A Shrine Dedicated to a Poet

Egara Tenjin-sha was established by Kamakura’s first shogun, Minamoto no Yoritomo, in 1104 as a shrine dedicated to the scholar/poet Sugiwara no Michizane, a minister at the imperial court in Kyoto who was falsely accused of wrongdoing but who was acquitted after his death in AD 903.

Records tell us that Michizane fell out of favor with the Fujiwara clan whose political machinations resulted in his banishment to Kyushu, where he died. Following his death, plague and drought spread across the land and sons of the Emperor Daigo died in quick succession.

This run of misfortune was attributed to the angry and vengeful spirit of Michizane, and to appease his wrath a shrine was built and dedicated to him. This was Kitano Tenman-gu in Kyoto. Many years later, Sugiwara was reinstated and deified as Tenjin-sama, a god of sky and thunderstorms - much worshipped by farmers when rain was needed.

Popular Among Those Seeking Spiritual Guidance – and Good Exam Results

Today, Tenjin is revered as the god of learning and scholarship, and many a high school or university student may be found at Egara Tenjin-sha, or any other Tenjin shrine, seeking spiritual guidance in their academic pursuits. There are some 12,000 Tenjin, or Tenman-gu, shrines in Japan, third in number behind only those of Hachiman and Inari.

Michizane loved plum blossoms. He would write poems about them, both in Chinese and in Japanese, extolling their exquisite beauty. It is said that after his death his favorite plum tree in Kyoto, about which he had written a poem, flew to Kyushu to be at his side at Dazaifu Tenmangu Shrine. This venerable old tree, Tobiume, "flying plum", stands there to this day, amongst 6,000 others, to the right of the Main Hall, like a sentinel by the grave of the poet, its master.

Whenever the east wind blows, my dear plum blossoms remember spring, even if your master won’t be there.

It seems that Tobiume was the first to answer his call.

A Symbol of Winter and a Harbinger of Spring

In the 10th century, during the Heian Period, the ume plum, or Japanese apricot, was a revered and popular tree that was planted in temples, shrines, parks and gardens. Often facing north-east, it was said to ward off evil, which was traditionally deemed to come from that direction.

Apart from its beauty and exquisite scent, the plum also held special spiritual significance. Coming into bloom in January and February, the coldest months of the year, it signified hope and perseverance as well as strength and fortitude. The plum tree was regarded as a symbol of winter and a harbinger of spring, and to the aristocracy it represented refinement, purity, and nobility.

The main sanctuary at Egara Tenjin-sha shrine is the sole surviving wooden structure from the Kamakura Period in Kamakura. It is said that the red plum in front of the building is the earliest to bloom in the immediate vicinity among the hundreds planted there. The same is said about the 1,000-year old Tobiume plum tree in Kyushu, mentioned earlier. In the photos shown here, you will notice the plum motif on the noren curtain and doors of the shrine.

There is also a white-flowering plum to the left of the shrine and, as an added bonus, a centuries-old ginkgo tree, said to be the symbol of Kamakura, adorned with prayers, at the eastern elevation of the grounds. This sacred tree is some 900 years old and designated as a Natural Monument by Kamakura City. It has an impressive girth of 6.5 meters.

Another point of interest is the Fude-kuyoo Monument, which looks like an upturned calligraphy brush, installed in the 1970s in honor of Kon Shimizu, a well-known manga artist.

Plenty of Venues to View Plum Blossoms in Kamakura

Late January to mid-March is a good time to view and savor the scent of plum blossoms at the temples and shrines of Kamakura. Other venues to enjoy this experience besides Egara Tenjin-sha are Hokaiji, Jomyoji, and Hasedera in Kamakura and Engakuji and Tokeiji in Kita-Kamakura.

Perhaps another quote from the Northern Song Chinese poet, Lin Bu, will put you in the mood.

Its thin shadows slant across the clear, shallow water.

Its hidden fragrance floats beneath the yellow moon.

There is something very poignant, both aesthetically and poetically, about the tiny, exquisite petals and the gnarled, rugged bark viewed against a stark winter landscape.

A 25-minute walk from Kamakura Station. Or, an 8-minute ride on a local bus departing from the East exit. Alight at Tenjin-mae.

Elizabeth S 3 months ago
I thought I knew Kamakura from years of working there for a few years. Still, there is more beauty to discover.
Reply Show all 0 replies

Elena Lisina 3 months ago
Ume is very beautiful! Interesting story, thank you, Peter! History is different from different sides. I read about Fujiwara as the supporter of Yoshitsune shown as a hero betrayed by his brother Yoritomo.
Reply Show all 0 replies

Sleiman Azizi 3 months ago
Another great find. Kamakura is a gift that keeps on giving...
Reply Show all 0 replies
3 comments in total

Elizabeth S 3 months ago
I thought I knew Kamakura from years of working there for a few years. Still, there is more beauty to discover.
Reply Show all 0 replies

Elena Lisina 3 months ago
Ume is very beautiful! Interesting story, thank you, Peter! History is different from different sides. I read about Fujiwara as the supporter of Yoshitsune shown as a hero betrayed by his brother Yoritomo.
Reply Show all 0 replies

Sleiman Azizi 3 months ago
Another great find. Kamakura is a gift that keeps on giving...
Reply Show all 0 replies
3 comments in total