The God that the samurai believed in

What a beautiful shrine, and what a really dignified place this is! Starting more than 800 years ago and lasting 150 years, the Tsurugaoka Hachimangu Shrine was the center of the great samurai city of Kamakura. Today the shrine is still an active busy beehive, full of activities and year-round events.

As you pass by the traditional outdoor Japanese dance platform, then climb the steep steps up to the shrine, you will feel that you are in a holy place. You will be impressed with the bright red pillars and heavy wooden structure. The surrounding green hills and trees will refresh you and create a sacred mood within your heart.

New Year’s Day is the most crowded and exciting time. You will see many women in kimono who have come to the shrine to make their New-Year’s prayers.

As a way to keep harm and malice away from people, the priests conduct a soybean scattering ceremony in February. Shinto priests sprinkle beans around the temple grounds while chanting special words. It is said that you will be free of disease during the coming year if you eat the same number of beans as your age.

Tanka, a traditional Japanese poem is offered up to the gods in March. They conduct a tanka contest every year, and my mother’s tanka was chosen and performed one year! The Shinto priest read out her tanka with unique tones. Usually we don’t read it like he did in the modern age. So it sounded quite new for me although it was actually in a style 750 years old.

From late March to early April, cherry trees are blooming here and there around the grounds of the shrine (and indeed all over Japan). This is so nice! If you come to Japan in spring, please don’t miss it.

Star Festival takes place from July 1-8. People write their wishes on slips of paper and then hang them on bamboo branches or wooden frames.

In August you can enjoy stunningly beautiful lotus flowers in two ponds situated at the left and right of the grounds soon after entering the shrine. The lotus flowers open their pedals in the morning. And they close at night. If you can get there in the silent, early morning, the serene beauty of the lotus will be a feast for your eyes. You will be one hundred percent contented with this calm and mystical scene, and you will never forget it.

One of the most popular events in the Hachimangu shrine is archery on horseback. This ceremony has taken place since the Kamakura Shogunate was established in 1185. Horse-riding archers wearing Samurai costumes shoot at three targets, one after another. You can slip into the age of our forefathers and cheer the samurai for their achievements.

November is the season of 7-5-3, a ceremony where seven-, five- and three-year-old children are celebrated. You will be happy to see cute little girls in colorful kimonos there with their proud parents. Tree leaves turn yellow and red from October through December. The color contrast of trees and shrine building is stunning and well worth seeing.

Tsurugaoka Hachimangu shrine has been the center of Kamakura from the very beginning. If you go up the stairs toward the main building of the shrine and then turn back when you reach the top, you will see the road as a bold, straight line that leads directly to the sea. Kamakura was built and developed by Yoritomo, based on this line. The origin of this shrine is Iwashimizu Hachimangu in Kyoto, but Yoritomo set up the shrine here as a guardian deity for the support of the samurai.

This is a 200-meter long cherry-tree lined lane leading to the shrine.

In the old days, people believed they should be cleansed and purified before going close to the gods. Passing under the gateway of the shrine, your soul and body are purified and you are now prepared to pray. In Tsurugaoka Hachimangu, there are three gates that stand on the road from the sea to the shrine. Dankazura is between the second and third gates. It is lined with 400 cherry-trees. You can go through a cherry blossom tunnel when they are in full bloom!

Mai-den: A dancing Platform for the Gods

This is a place for ceremonies and dancing performances. If you are lucky, you might be able to see some rituals or an authentic Japanese wedding ceremony taking place!

The priests conduct purification ceremonies and pray to the gods here. If you come up to it, you will see a large black plate displayed under the eves of this building. The plate shows Hachi-man-gu written in large kanji characters. The first kanji is Hachi (eight) and it is designed to resemble a pair of doves. Isn’t it charming? You can get a lucky amulet of this dove design at the shrine offices. 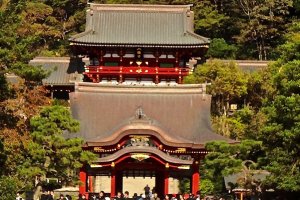 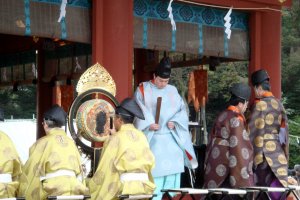 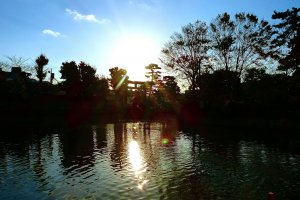 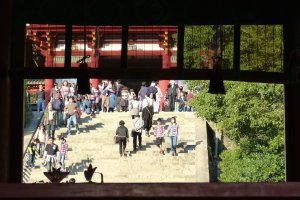 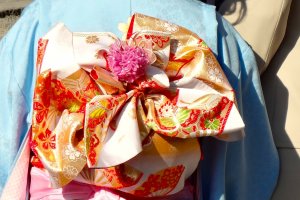 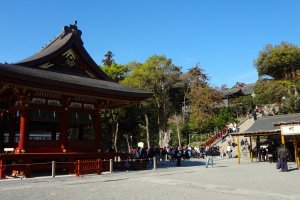 Elena Lisina a year ago
It seems to be very popolar shrine.
Reply Show all 0 replies

Tomoko Kamishima Author 6 years ago
Cherry blossoms along the approach to Kamakura Hachimangu Shrine is in full bloom today!
Reply Show all 0 replies
2 comments in total