Forest bathing, shinrin yoku in Japanese, refers to the restorative effects of relaxing in nature. I felt I was doing this, bathing in the forests, when I henro-ed at Kochi’s Temples 28, 29, 30, 31, and 32. They were all havens of natural and untouched surroundings. The dense woods also provided a bit of mystery to the main temples’ adjacent shrines, statues, stone monuments, as though these were playing peek-a-boo from behind the trees, for I sometimes had to look twice to ensure I was not seeing things. And sometimes maybe I was.

Dainichiji Temple 28 at the foot of Mount Sanpo is reached via a steep ascent on roughly hewn granite steps, through overhanging fir, pine, and bamboo. Dainichiji‘s deities can be prayed to for cures of illnesses of the head and upper torso, and success in academic life. I can believe it, it must be the shinrin yoku effect, which is regarded as “the medicine of simply being in a forest”.

I walked through a country road surrounded by farmland to reach Kokubunji Temple 29. A cedar lined corridor led to the temple which ,with its faded wood carvings, accompanying juzo and Kannon, all against a curtain of green, temporarily staunched my longings for a pastry and coffee. Zenrakuji Temple 30 was a splendor of greenery, with little walking trails by the side of the temple for plenty of shinrin yoku. The Temple, despite no Lemon Pledge, is beautiful with age and character.

Chikurinji Temple 31 has the appropriate alias of Bamboo Forest Temple. Built on Mount Godaisan, it couldn’t avoid being a shinrin yoku temple even if it wanted to. The grounds are a moss carpet, and many old juzo and stone monuments lurk between the foliage. The Main Temple and supporting shrines are all time-worn brown wood, and contrast well with the fresh, bright greenery that fringe them. The Pagoda there didn’t thrill me. What did was Chikurinji’s grounds with plenty of spaces and walking trails to rest feet and mind.

Zenzibuji Temple 32 was a horror of climbing, first a long and winding steep mountain road, then interminable steeper temple steps. Just when you thought this must be it, it wasn’t. Zenzibuji is not known as Summit or Peak Temple for nothing. The scenic reward is a view of Kochi. I passed the sea on my walk in, so it was not surprising to learn the great man himself, Kobo Daishi, founded the Temple to be the guardian of ships.

Shinrin-yoku originated in Japan in the 1980s, but where else could it have sprung up except here, Japan being 67% forested, with Kochi holding the highest forest coverage of 84%. Shinrin yoku is almost a religion, since veneration for the trees as Gods or godly is part of Buddhist and Shinto practice. Soaking in a sea of green trees, woods, forests, however, was not just about gawk and gape. It enhanced the ambience of spirituality in these temples I was blessed to visit. 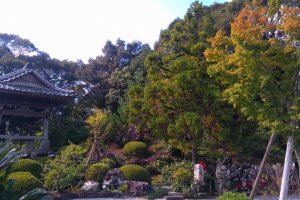 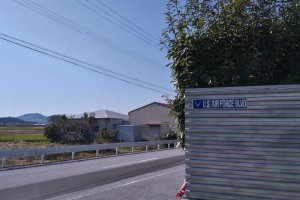 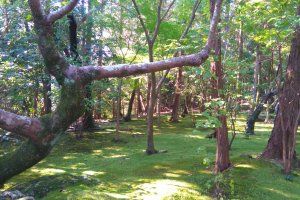