Hot spring baths on the slopes of Mt Aso

Tarutama Onsen lies on the southern slopes of massive Mt Aso. There's not much here to indicate to visitors that this is one of the region's most beloved bathing spots, especially in autumn. A lone complex, the rambling Ryokan Yamaguchi, stands at the southern end of the Tarutama area. (The more sulphurous Jigoku Onsen is just up the road.)

While Ryokan Yamaguchi happily welcomes overnight guests, they are also open for day bathers. A ¥600 entry fee gains visitors access to the spa's spacious indoor baths. On the women's side, the tub itself was sprawling, and was built to offer sweeping views of the valley and the forested hills beyond. The temperature was nearly perfect - the only slightly sour note was the tepid temperature of the water falling, cascade-style, onto bather's backs in the corner of the bath.

I would have thought that was all there was to the onsen had another bather not exited through a door just beyond the waterfall corner. A short wooden hallway led to a small flight of stairs, which opened out onto a small deck. Two small wooden tubs were set into the planks, allowing for individual bathing under the crisp blue skies. There was also a small square tub, almost unbearably hot, tucked into the small building that stood next to the outside baths.

Sadly, the best part of the property is now closed to day bathers. Across the street from the ryokan, a waterfall tumbles down into a narrow valley and the ryokan has constructed a lovely rotemburo right along the edge of the bank. If you want to take a soak in this unique setting, a night at the inn is a must.

Ryokan Yamaguchi is accessible via a small country lane just off Route 325, the main road that circles the southern side of Mt Aso. There are small signs in Japanese and English pointing the way to Tarutama Onsen. Be aware that if you try to access the Tarutama area from Route 111 further down the road, you'll encounter a gutted, washed out lane and an eventual gate forbidding visitors to proceed any further. Ryokan Yamaguchi offers free parking for both day bathers and overnight guests. 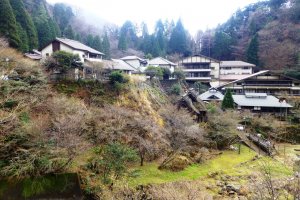 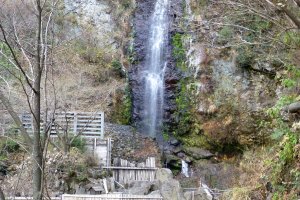 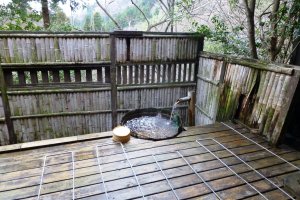 JapanTravel Guest 6 years ago
Thanks for the info! Am planning a trip to Kyushu and am thinking of going to Kumamoto... might include this onsen in our to-do list!
Reply Show all 1 replies

Mandy Bartok Author 6 years ago
Kumamoto has so many wonderful onsen, Wendy. It'll be hard to narrow it down if you come!
Reply
2 comments in total