The kaiseki restaurant of Senjuan sits in the eastern part of Kumamoto city. It's a decent hike from the last stop on the tram line and set in a workaday neighborhood. Locals are more likely to visit the nearby kaitenzushi chain eatery Sushiro than indulge in what is normally a pricey meal of painstakingly prepared seasonal cuisine.

But step through the curtained doors across the street at Senjuan and you'll be treated to the freshest food presented in several exquisite courses. Our lunch began with a starter plate of sashimi, fresh salad, a creamy tofu and a flavorful chawanmushi (egg custard). This was followed up by a box of various "goodies" - wheat gluten topped with red miso, dumplings, small meatballs, simmered vegetables, small portions of various cooked fish and egg omelet. A dumpling made of some sort of potato and topped with a sauce much like agedashi tofu was the main part of the course and taste-wise, it did not disappoint. Despite the fact that everything was presented in bite-sized morsels, I was nearly full when the waitress brought out the plate of vegetable tempura, the chagohan (rice wih tea poured over it) and the dessert of fresh fruit bites (including local grapes and rarely seen pomegranate seeds). Dessert is also accompanied by either a cup of tea or a cup of coffee.

The menu is in Japanese, but there are pictures to assist a bit with the choice. A familiarity with the Japanese kanji for numbers will be useful as the prices are written entirely in Japanese, but for reference, the cheapest lunch meal is ¥1728. Comprising at least 7-8 separate dishes, it's a steal for the price.

Unlike many kaiseki restaurants, seating at Senjuan is at tables and chairs in a carpeted dining area. As far as I could tell, there is one main room, meaning private rooms are not an option for this establishment. However, a range of child chairs indicates that kids are more than welcome.

A local bus runs along the road in front of Senjuan but if you are not familiar with the Kumamoto bus routes, coming by car is your best option. There is parking for about eight vehicles in the gravel lot right in front of the restaurant. 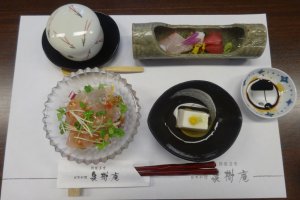 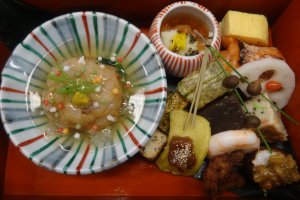 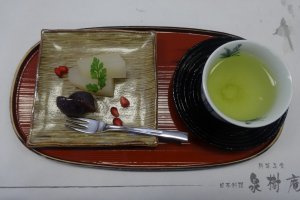 Yui Yamaguchi 4 years ago
Did you like chagohan? I never heard about it and wonder what the taste like...
Reply Show all 0 replies
1 comment in total