Hokoji Temple and its Fatal Bell

The tragic Kyoto bell that led to fall of Osaka Castle

Hokoji Temple in Kyoto has a very dramatic, fatal bell on its premises, which doomed and led the Toyotomi Clan to destruction. They perished from the earth because of this bell... Well, I know I'm exaggerating a little bit but doesn't it sound better if I call it 'The Fatal Bell' than calling it just an ordinary bell?

Background As you may remember from one of the history classes you took as a child, Tokugawa Ieyasu, the first Shogun (king) of the Tokugawa Shogunate who ended the long war period and created a peaceful Edo Era which lasted 265 long years, destroyed the Toyotomi Clan in 1615. After the Battle of Sekigahara (1600) in which he won, he started the Tokugawa Bakufu (government) right away. Then, why did it take him so long to 'take care of' the Toyotomi Clan?

Well, it's simple. He fought the Battle of Sekigahara under the pretext of protecting the Toyotomi Kingdom! Under this pretext many powerful subordinates of Toyotomi Hideyoshi, the previous ruler of Japan, fought on Ieyasu's side. How then, could he possibly exterminate Hideyoshi's heir, Toyotomi Hideyori, age five, in that situation? So, he had to wait and think how to seize total control over Japan without seeming to be a treacherous thief (he was one of Hideyoshi's subordinates, though the most powerful).

How Ieyasu waited He is renowned for his unbelievable patience. He was a powerful samurai and lord, but unfortunately, wasn't powerful enough to conquer both Oda Nobunaga (1534-1582) and Toyotomi Hideyoshi (1537-1598) when they reigned over Japan respectively, so he had no choice but became their subordinate. When Oda Nobunaga ordered Ieyasu to kill his own wife and first son (1579) to show his loyalty to Nobunaga (there was a reason for it, of course), he even complied and killed them both, his own wife and son! That shows how patient he was.

So, this time, too, he waited. In my opinion, I don't think he planned to 'exterminate' the Toyotomi Clan at the beginning. He even followed Hideyoshi's will and made his own grandchild marry Hideyoshi's heir, Toyotomi Hideyori. So, if they were just happy being one of many daimyos (feudal lords) under the Tokugawa Bakufu (government), he would have let them live. But even after the Battle of Sekigahara and after Ieyasu started his own government and became Shogun, the heir of the late king, Toyotomi Hideyori, as one of Ieyasu's daimyos, stayed inside the most formidable fortress in Japan, Osaka Castle. That was a threat to Ieyasu. There were still some powerful daimyos who were loyal to Hideyori, they could fight against Tokugawa behind that kind of powerful castle and even win! Think! Ieyasu think!

How Ieyasu tried He suggested that they leave Osaka Castle and move to some area in Kanto (Tokyo area) as a daimyo. They said, 'No!'... Nene, the wife of Hideyoshi, now retired to Kodaiji Temple in Kyoto as a nun, tried to persuade them but they said, 'No!'. I say 'they', but in this case, Hideyori was still a child, so the one who said 'No' was his mother, the mistress of Hideyoshi, Yodo. She adamantly refused to leave Osaka Castle. She thought as soon as they left the castle, they would be confined to a small castle somewhere in Kanto and be killed. Well, maybe, maybe not.

Cornered Ieyasu He was old (when he destroyed the Toyotomi Clan finally, he was 73!), his days were numbered, and his heir was mediocre without leadership. He had to concrete a foundation for his Tokugawa government before he died. Any threat should be removed. So, first he tried to decrease their fortunes. Even though Toyotomi Hideyori became one of his daimyos and his revenue decreased, they were tremendously wealthy. His father Hideyoshi left him tons of gold piled up inside the vault of Osaka Castle. Let them spend! So he suggested that they donate, build, restore temples and shrines to 'pray for his father's soul and commemorate his greatness). They took his suggestion and started to have many temples and shrines built or restored, which include Kitano Tenmangu, Yuki Shrine, Hokoji Temple (this one!), Konkai Komyoji, Anraku Juin, Kondo of Toji, Seiryoji, Daigoji, Shokokuji, etc. etc. Wow, we can enjoy beauty of those temples and shrines now because of his generous donations! though I have a mixed feeling when I think of the fate he and his family led after this...

Fatal Bell Then Ieyasu moved in for the kill. One of the temples Hideyori was having built was Hokoji, this temple. When it was almost completed and waiting to be opened to the public, Ieyasu stopped them. Why? Because, there was something ominous, which could be interpreted as a curse upon Ieyasu, was written on the bell. His name is Ieyasu, in Chinese characters, 家康. On the bell, these two characters were used to describe the wish for the peace of a country as 国家安康. But his name 家康 was separated by one word 安. Dismemberment! That's what he said, and pretended to take offense by it. Well...what a lame pretext... But he was desperate, his days were numbered, remember?

What happened? Now that he had a good excuse to attack Hideyori, he did as he planned, and his subordinates followed suit, to perish Toyotomi Hideyori, the late-king's only heir, their former master's only son, from the earth. They attacked Osaka Castle twice, in 1614 and 1615, and the castle was burnt to the ground, with Hideyori and his mother, Yodo. For your information, Yodo released Hideyori's wife, Ieyasu's grandchild, Senhime (princess Sen) before the castle was burnt down. She was returned to Ieyasu safely. Well, how about that! (FYI, Ieyasu had Hideyori's son (age 8) by his mistress beheaded after the war, thus the Toyotomi Clan perished from the earth.)

P.S., Hokoji Temple and its bell are located beside Toyokuni Shrine, in which Hideyori's father, Toyotomi Hideyoshi, is enshrined. I'd recommend you visit them both if you happen to be in the Higashiyama area in Kyoto. And if you happen to see temples and shrines which Hideyori donated and built, please take a little time to remember his short, tragic life (he died at 22). 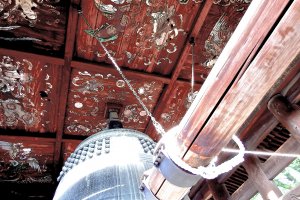 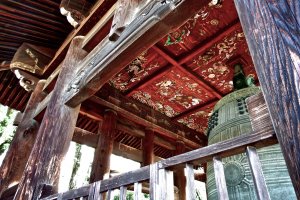 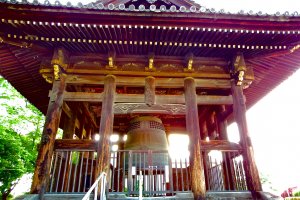 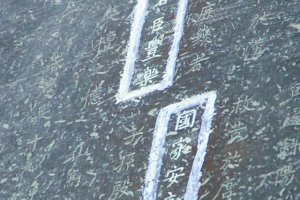 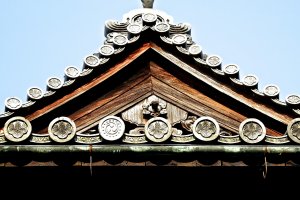 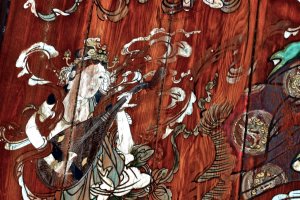