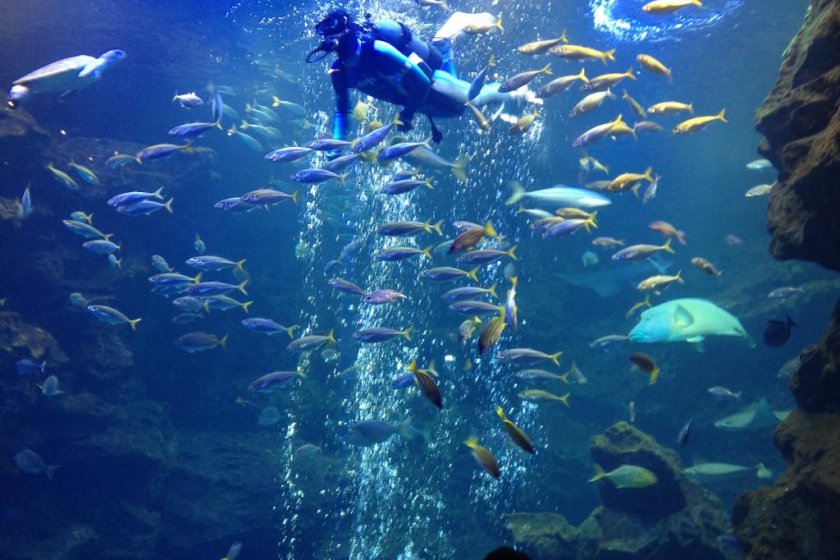 New 'n glitzy: big money has been sunk into these tanks

You wouldn’t think to visit an aquarium while in Kyoto would you? Secondly, is it really worth Y6800 for a family of four to visit an aquarium, any aquarium, for just 90 minutes? Luckily, it wasn’t me who was paying. Admission for my 3 year old son was Y600 but for his aunt, myself and his dad, it was Y2000 each. Ouch.

I remember walking with the family through Umekoji Park in January 2012, seeing all the construction. Well it was the aquarium, opened March 2012, after a lot of controversy.

We visit family in Kyoto once or twice a year during holiday season when most touristy type places like museums are closed. Kyoto Aquarium, we learned this holiday, is open 365 days of the year. Personally, I find it sad to see creatures like dolphins and penguins far removed from their natural habitat but then again, I didn’t want one more day stuck in front of the TV at my mother-in-law’s place.

We took a 5 minute taxi ride from Kyoto JR Station to the aquarium. It’s just a little too far to walk with a small child on a cold day. I suggest checking the aquarium website or Kyoto station information center to get directions on how to take a bus, if you are not in the mood for walking. There are shuttle buses on weekends and public holidays but we hadn’t done our homework.

At the entrance by the ticket counter are an impressive set of washrooms. Toddler toilets, kid’s urinals in the the ladies’ side, lovely design throughout, nursing and changing room with facilities to prepare formula for infants, and of course barrier-free toilets as well.

The aquarium was crowded– like I said it was one of the few interesting indoor places a family can go in Kyoto on a cold day during the New Year’s holiday. The first thing to see is the freshwater exhibit, the highlight of which were giant swimming salamanders. In the next room, a floor to ceiling illuminated tank of tropical fish. We must have squatted in front of that tank for a good 15 minutes observing the sea life. A couple of scuba divers fed the fish in front of us. Further along, another view of the same tank and then the seals in another huge tank with many angles from which to view them; watch them swim through a glass cylinder in front of your nose. The design of the aquarium is great, reminiscent of Asahiyama Zoo in Hokkaido, arguably the best-designed zoo in the country.

We soon shed our winter clothes, stacking them on the stroller, which we didn’t really need because my 3-year-old was busy getting his face up against the glass. I would suggest you use the lockers near the ticket counter for extra bags that will impede your movement. That said, the penguins and dolphins are outside, so on a cold winter's day you will need your jackets, scarves, and mittens and in the summer, you might want sunglasses, sun visor, and fan for the dolphin show.

My sister-in-law and husband heard the announcement for the dolphin show, so dragged my son and I passed the touch and feel area, which I thought could have been the best part had there not been a wall of kids in front of that tank. “Hurry!” They implored, “we have to get good seats.” Well, we didn’t want to be so close as to get splashed. We would have frozen. We scored central seats with a nice view of the park, the Shinkansen and Kyoto’s skyline. The theater was fairly full but not 100% even though I’d venture to say it was one of the busiest days of the year. The dolphin show was awesome. How do they train wild animals such as dolphins to do tricks just like horses or dogs? Lots of treats!

If you plan to be in Kyoto for the whole year, you can pick up a season’s pass – which comes at the same cost as two day’s admission. Why so cheap? I think for most people, once a year is enough.

We arrived at the aquarium at 11 AM; the dolphin show finished around 12:30. My son was famished by then. The last stop of course, like any good tourist trap, is the gift shop. We couldn't leave without an overpriced plastic bath toy of my son’s choosing. There doesn’t seem to be many restaurants nearby, so we headed back to Kyoto Station by taxi for a meal. We did get our hands stamped so we could return the same day however a return trip was not in the cards.

It's with a love of adventure that I came to Japan to teach English in 2003. I am a mother now so I can especially recommend places to go (or not go) for those traveling with young kids. 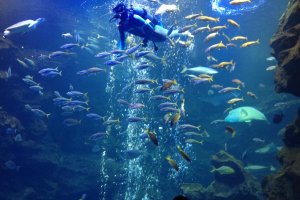 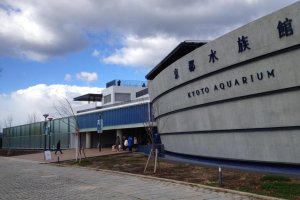 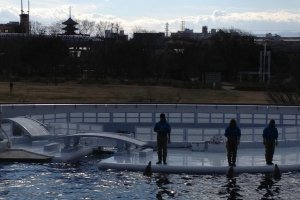 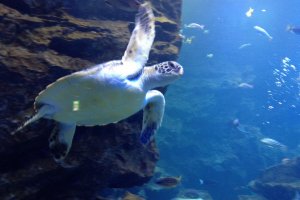 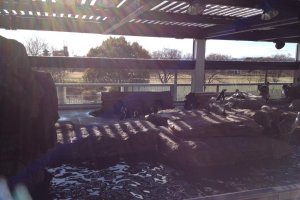 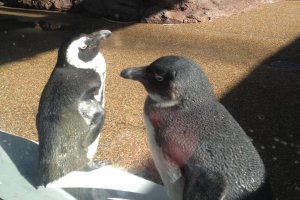