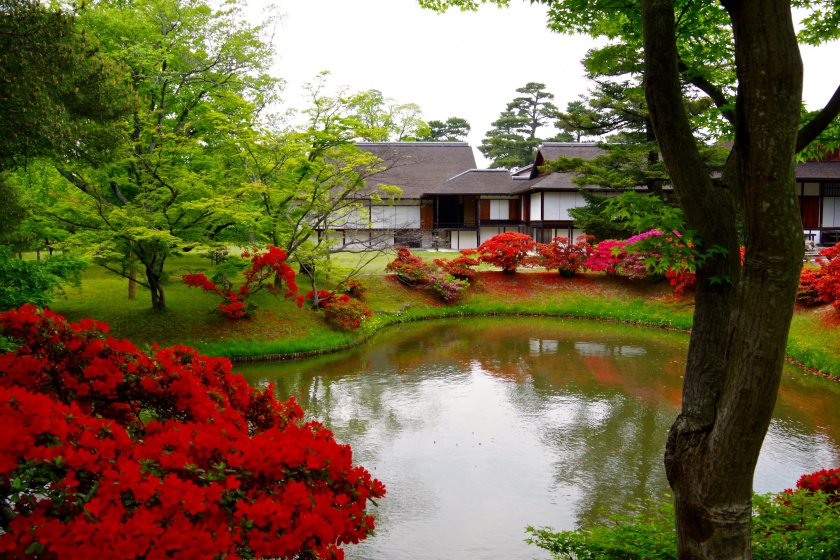 The Shoin moon viewing spot beyond the pond

In ancient days, Katsura in southwest Kyoto was a popular moon viewing spot for court nobles. In the world's oldest novel, Tale of Genji, there is an impressive scene in which Hikaru Genji holds a moon viewing party in Katsura. Katsura Imperial Villa, established by Imperial Prince Toshihito (1579-1629) and Toshitada (1619-1662), has many elaborate embellishments based on classical court culture. But at the same time, the whole concept of the villa is extremely simple and functional. In fact, it deeply impressed a modern architect, Bruno Taut, who fled Germany and visited Japan in 1933.

Image of Katsura in Tale of Genji

The main character, Hikaru Genji, owns a villa in Katsura. On the way to visit his lover Akashi-no-ue and their daughter in Sagano, he first drops by his villa where he is hosting a party with noblemen (see the chapter titled Matsukaze).

They sang and recited Chinese quatrain poems when the moon was beginning to rise. Then they had a banquet while listening to wind and string instruments. At the height of the feast, a message from the Emperor was delivered. The Emperor was having a party at his own Imperial Palace and asked after Hikaru Genji. Knowing that Genji was here in Katsura, the Emperor had composed a poem.

Thou art surely enjoying this exquisite moon in Katsura

The riverside villa - residence to the light of a clear moon

Genji apologized in his heart to the Emperor for not being with him that evening.

Tour of the villa

Katsura Imperial Villa, as well as other Imperial assets such as Shugakuin Imperial Villa, is under the Imperial Household Agency’s control. So you will need to make an advanced reservation before you can visit and participate in a guided tour (see details).

The walking tour starts from the north shore of the pond and moves around the garden clockwise. The waterfront of the pond is quite irregular, and so we experience a variety of interesting views from different angles. The teahouse Shokin-tei, located on the east islet, has famous bold blue and white checked sliding doors (see below). Shoka-tei, on the south islet, has delicate bamboo-made lattice windows. They are very impressive. Crossing over the wooden bridge and enjoying crimson azaleas (in early May), you will reach teahouse Shoi-ken, in the south. The window resembles a picture frame and the fresh green is a natural art piece.

Then we reach the main building called Shoin, and the attached teahouse Geppa-ro, in the last stop of the tour. Shoin was built in a traditional style of Japanese architecture for the sole purpose of formal entertaining. Emperor Toshihito fully worked out the design for moon viewing. He had a bamboo covered terrace facing the pond. It is the best point for harvest moon viewing. According to a computer calculation by a modern architect, the moon from the terrace was seen double, both in the sky and on the surface of the pond, from 8 PM to 10 PM.

Bruno Taut was a German architect who introduced the exquisite beauty of Katsura Imperial Villa to the world. He was born in Königsberg, Prussia in 1880. After studying architecture, he established his own office in Berlin in 1910 and participated in several large residential developments. One of his works, Modernist Housing Estates, became a UNESCO World Heritage Site in 2008.

After the Nazis came to power in Germany, Taut was forced to flee the country due (perhaps) to his Social Democratic beliefs. In 1933, he visited Japan to attend an architectural conference. He stayed in Japan for the next three and a half years. Meanwhile, he produced various furniture and interior decorations using Japanese materials such as bamboo, washi paper, lacquer ware, and so on.

Taut loved the Villa and wanted to share its greatness with the world. He thought that the Villa was functional, practical, and spiritual. He thought it a great miracle that all three factors were contained within one structural component. He described the spiritual factor of the Shokin-tei teahouse in Gedanken über Katsura. Here is a brief summary of his experience:

I sat at the edge of a wooden corridor. A small waterfall was just over there within view, and the sound of the falling water was within earshot. I looked around the room. And I was shocked. I couldn’t take my eyes off the paper sliding doors. They were designed with checks of bold blue and white… This looked strange. But wait, this must be something important. Yes, it symbolized the reflection of that small waterfall in front of me!

As Taut discovered, everything in Katsura Imperial Villa showcases the essence of traditional Japanese beauty. Imperial Prince Toshihito and Toshitada tried to build the finest structure possible. It is very simple but truly beautiful.

*An index of this entire Foreign Footsteps in Japan series can be seen here. 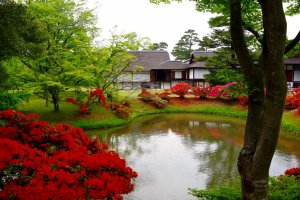 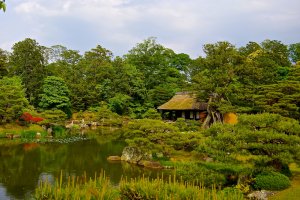 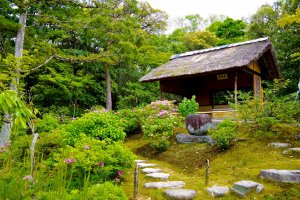 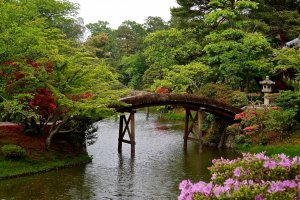