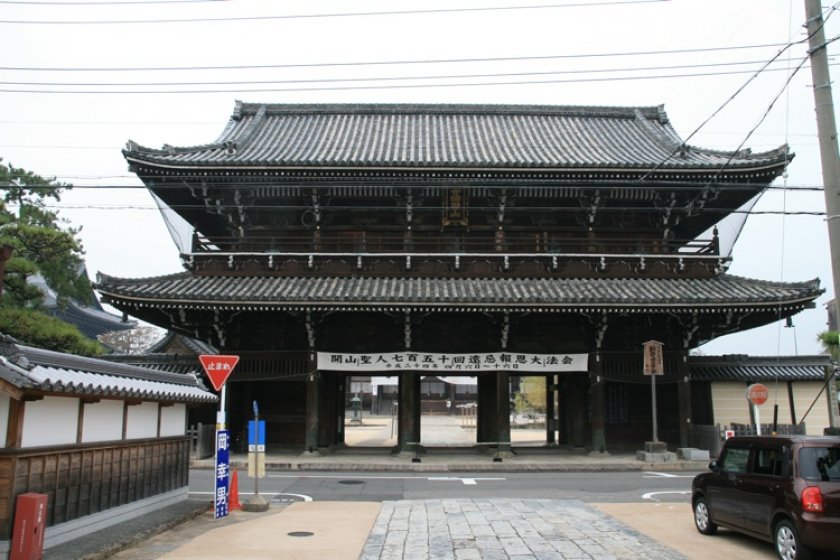 Just 5 minutes walk from the JR Isshinda Station in Tsu City, and directly east of the Kintetsu Takadahonzan Station is the largest Buddhist temple in Mie Prefecture, the Senjuji.  Surrounded by high earthen walls, with an impressive set of gates and the distinctive Taikomon bell tower’s gabled roofs, the temple looks more like a small castle than a place of worship. Listed as an Important Cultural asset, and boasting a 725 tatami mat floor space, the main worship hall is the largest wooden structure in the prefecture. The temple was founded by the great monk Shinran Shonin in 1226, and was the chief temple of the Takada branch of the Jodo Shinshu sect of Buddhism. The temples name “Senju” was taken from the sects’ prayer chant, senju-nenbutsu (Mindfulness of the Buddha) although it is also known as the Takada Honzan.

In 1477, the temple was designated an official Imperial temple, and elevated in status again 100 years later to that of Monzeki, being a temple headed by priests of imperial or aristocratic lineage.

Of the 12 main structures in the temple complex, seven are registered as Prefectural Cultural Assets. The first to gain your attention is the main Sanmon Gate, an impressive 20 meter wide, 15.5 meter high built in 1704. Entry through the magnificent structure takes you into the 10,750 square meters of grounds.

Directly ahead is the 42 meter wide sacred hall, Mieido, dating from 1666. Inside is a most impressive sight, starting with the huge wooden pillars and interlocking cross beams, the white painted edging of each beam is in stark contrast with the color of the aged timbers and darkness of the ceiling. However, it is the inner sanctum that is truly marvelous! Gold leaf adorns the pillars, while the roof is a mosaic of brilliant blues and greens like the tail of a peacock. Behind the red clothed alter on a black lacquered base sits a brilliant golden pavilion surrounded by a bright red parapet.

Completed in the 1740’s, the twin roofed Nyorai-do’s first focal points are the complex array of roof trusses supporting the upper level. As with the inside, the edging of the woodwork is painted white, contrasting with the older darker timbers. Inside, while not as elegant or as colorful as the more important Mieido, there’s still enough gold and fancy ornamentation to keep you gazing in awe.

Treasures of the Senjuji include a wooden statue of the temples’ founder, Shinran seated with prayer beads in hands. The scroll, “A record of Shinrans’ Dream” is also preserved at the temple, along with other national treasures and important cultural assets.

Behind the Sacred Hall is a lotus pond and a winding stone path leads you through a beautiful moss garden called Unyu-en. Within the moss garden is a traditional tea house named Anraku-an, which was relocated to the Senjuji from the remains of Fushimi Castle following the castle’s destruction in the Battle of Sekigahara in 1600. Visitors wishing to see the Houmotsukan treasure house and inside the tea house are asked to contact the Senjuji Temple in advance. 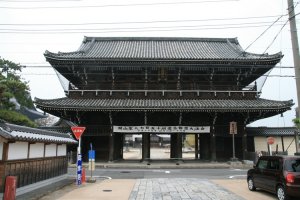 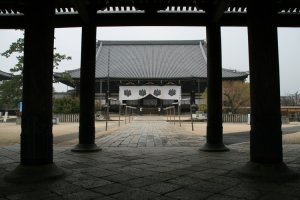 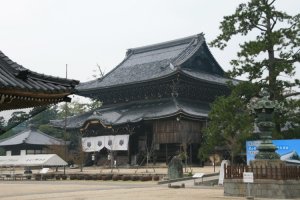