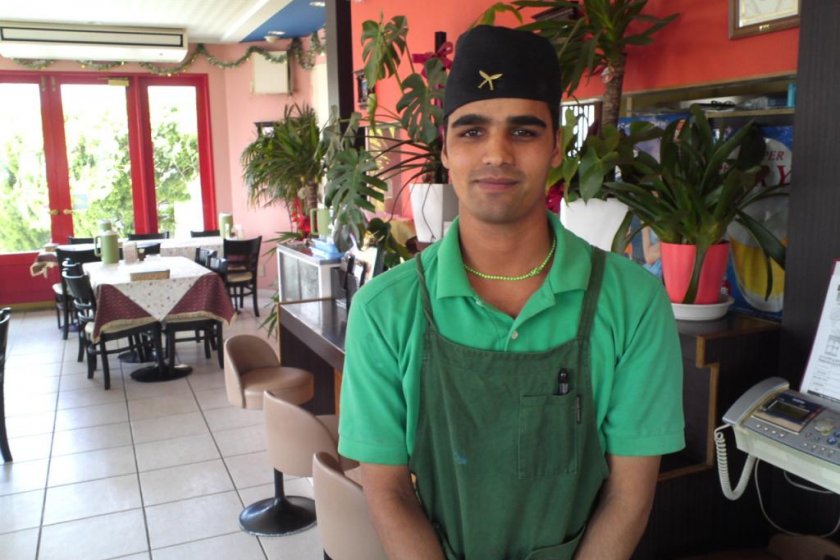 My waiter at lunch; after I shot this, he took out his IPhone and shot one of us together! (Photo: Paul Arenson)

Miyako City, home to the city’s bus terminal and across the street from Minami Miyazaki train station, is not a terribly exciting place, but if you are traveling to other parts of Miyazaki, or indeed to Kagoshima, Kumamoto, Fukuoka and other parts of Kyushu, you may well find yourself waiting for a bus here. You could kill some time in the on-site Daiei supermarket (which also features a section where you can order and eat ice cream cones, okonomiyaki, and ramen. Or you could make your way to the front of the building and have a cup of coffee and a sandwich at Doutor, or perhaps a donut and some frozen coffee ice cubes in milk at Mr. Donut. In the immediate vicinity, there are also fast food beef bowl places made with mystery meat from who-knows-where, but if you fancy something of a higher quality and have the time, walk 15-20 minutes to the Nepal Indo Dining Cafe Surya.  Yes, that is the way the name is written. Probably some of the best dining you are going to find nearby at a reasonable price in this area of town.

I had seen the bright yellow façade--Surya refers to the Sun god, or the sun itself--a number of times on my way back from Miyazaki University hospital by bus. Since slightly before moving here in late March 2012, I was troubled by what eventually was diagnosed as subacute thyroiditis.  Lucky for me the disease is easily treatable, and luckier still that the route home took me right past the place.

The lunch menu is actually available from 10:30 AM until late afternoon, and the a la carte options and dinner sets are available after that until 23:00, midnight on Fridays, Saturdays and the day before a holiday. Although many of the set items are familiar, I found the taste lighter and less oily than that of many Indian restaurants.  The dal curry, in contrast to what I have had at other places, was light and creamy. You have 11 levels of heat to choose from: I chose 4 and that was pretty fiery, but not at the expense of flavor and subtlety.

A la carte items include many different kinds of breads, the Nepalese steamed dumpling known as Momo, and even some Nepalese fusion cuisine that includes “Chow Mein” and other dishes you would not expect to see in a place like this.  There is also a tempting mixed nut lassi (yogurt drink), Nepalese beer, and—this being Miyazaki—shochu. English is spoken by most of the Nepalese staff.

For accuracy’s sake, the actual address is Hayama Gendōchō17-1, Miyazaki, Miyazaki Prefecture, Japan.  But on Google, that will put you near pachinko shop with all the numbers on it.

You can get to Surya easily from the bus terminal by turning right in front of the Mister Donut shop outside the Miyako City terminal complex and walking 3 blocks (about 450 meters; keep going past the Broth pachinko shop that you will see on your left-no soup to be had here). Soon you see a street coming from the right that merges with the one you are walking along. Cross that street and turn left. You will notice palm trees in the center of the road; you are now on the extension of the famous Tachibana Dori which becomes the “Bypass” as it heads south, and you will see mountains in the background. Keep walking another 400 meters or so, past a store for kids and a ladies clinic on the right. As you cross over a river, you will see a bowling alley on your right called Joy Plaza. One the left side of the street you will an odd building  (yes, another  Pachinko parlor) with lots of numbers all along the window. At the bowling alley, turn right and walk down the hill for about half a minute, and sunny, spicy Surya will be right in front of you.

Note: As mentioned, Google and other Internet maps are wrong for this area. They will put you by that numbered pachinko shop on the left hand side of the street. The Joy Plaza bowling alley right in front of you is where you want to be, and from there it is just 50 meters more to Suruya going down a slight incline. Get to the bowling alley and you are almost there. Please see the photos for further help with directions

From the town center

If you are coming from the center of town, ask at the tourist information desk in the station about buses that will let you off at Seibi Koujo Mae. That is right in front of the restaurant.

The 15-20 minute walk from the bus station has made you hungry. Since the food is so good, you might miss your bus, but there are worse things that could happen. Enjoy yourself, and bon appetit! 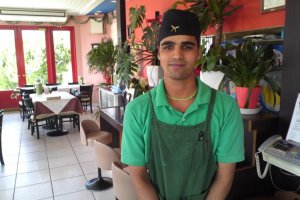 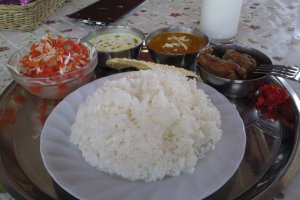 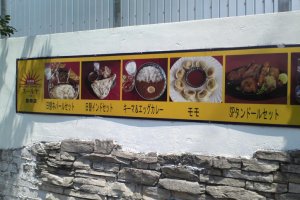 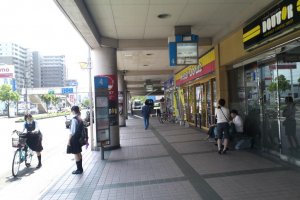 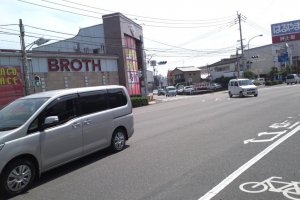 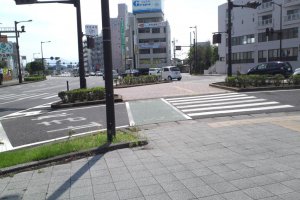