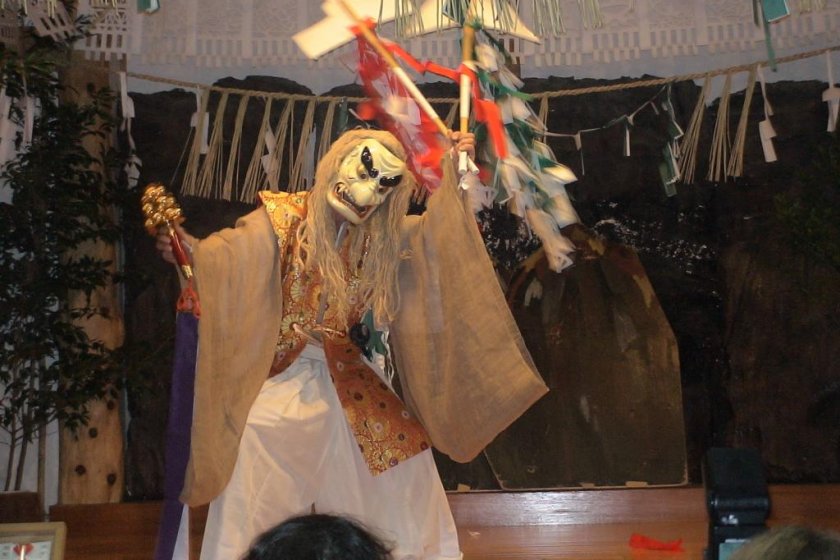 In solemnity and hilarity, come honor the gods

The try to force the boulder open.

It’s a fresh, clean coldness as you approach. Step beneath the towering gate; you see a light, and people. Climb the stairs, enter the shrine proper between the night gaze of its guardian dogs, and everyone is gathering; follow them into a welcoming warmth and join the crowd before the stage. The show is starting soon.

These are the yokagura dances at Takachiho Shrine, a tradition as old as the gods. The true yokagura dances are held from mid- November to mid- February each Saturday night, all night long, and are huge social gatherings. There are thirty-three dances in total, held to honor the gods and pray for good harvest. I hope one day to view the real thing, but for those (like me) unable to get to the real events, a much shortened, hour long version is performed every night, year round. It’s this that I attended. The stories are told through music and motion, grand and subtle gesture that pulls you in and opens your eyes wide with myths alive.

The world is cold and dark. Ameterasu, the Sun Goddess, antagonized beyond bearing by her brother's wicked pranks, has gone into hiding, taking with her all the worlds light and warmth. The gods convene, debate what should be done. All manner of things are tried, until one beautiful goddess steps up and beings to perform an outrageously funny, sexy dance that causes all the gods and goddesses to roll with laughter. Intrigued by the commotion, Ameterasu peeks out from her cave ever so slightly, only to have the giant boulder blocking the cave thrown aside, finally releasing day back into the world. The movements of the actors bring motionless masks to a living reality. The music weaves and blends; your senses are one with the moment before you realize it. So ends the first three dances.

The last dance was a hilariously comedic number about the gods…making alcohol. Izanami no Mikoto (goddess) and Izanagi no Mikoto (god), ancient parent gods of Japan, accompanied by cheerful pipe music, go about making, and of course, drinking, their liquor, and getting drunker and drunker. They begin to fool around, if you catch my drift, but Izanagi falls asleep halfway through! So Izanami sets out staggeringly into the audience and throws her arms around another man! There are no words, no explanations needed to enjoy this story, so I won’t spoil it for you, but let me say this; if the hour-long performance had me breathless with laughter, I can only imagine what the all-nighters are like! 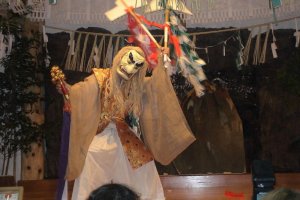 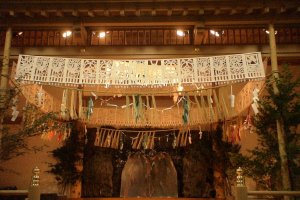 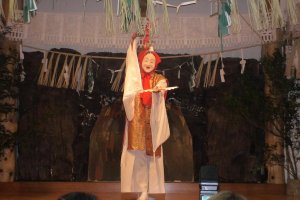 Mandy Bartok 9 years ago
I was just here two nights ago ... a very cool experience!

Avery Morrow 9 years ago
This sounds wonderful! I wish I had got the time of year right :)
Reply Show all 0 replies
2 comments in total