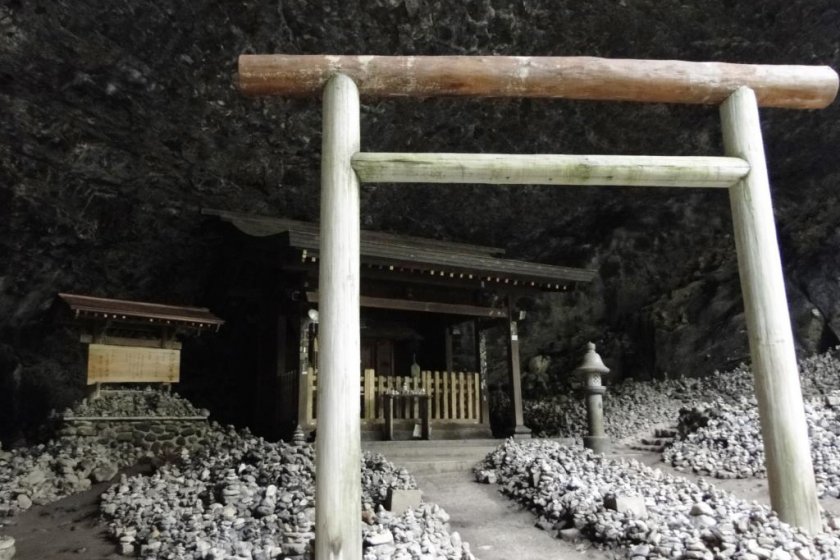 The cave where a Japanese myth was born

The torii gate that marks Ama-no-Iwato

The myths of ancient Japan are alive and well in rural Miyazaki’s Takachiho village, but nowhere more so than at the Ama-no-Iwato cave and shrine. It was here that the sun goddess Amaterasu – the acknowledged forbear of the Japanese Imperial line – locked herself away, stealing the sunlight from Japan.

Myth and history are closely intertwined in this untouristed part of central Kyushu. The names associated with this region read like a veritable who’s who from the Kojiki, an 8th century text that details the lives of the deities who form the basis of Japan’s Shinto religion. Sun goddess, storm god, god of heavenly strength … all have supposedly made their mark on the impressive geography of Takachiho.

At Ama-no-Iwato, the old myth of Amaterasu plays out in a shallow cave tucked into the solid rock walls of a narrow gorge. Amaterasu, in a rather serious bout of sibling rivalry, locked herself away in this grotto to protest the destructive behavior of her younger brother Susano-o, the Storm God. Being the sun goddess, her self-imposed sequester thrust the world into darkness and her fellow divinities became desperate. One after another, they attempted – and failed – to coax her from her hideaway, until the goddess of entertainment danced a rather provocative number. When Amaterasu peeked out to see what the commotion was, the gods heaved the cave’s boulder door away and the world was once again blessed with light.

True to the story, there is no boulder that fronts the cave at Ama-no-Iwato. The site is instead marked by a torii gate, indicating the sacredness of the spot. In the gloom of the grotto, one can almost feel that Amaterasu is still inside, withholding her precious sunlight. The river that runs through the gorge however is a beautiful sight. It’s not quite as grand as the nearby Takachiho Gorge but the half mile hike along the riverbank to the cave is quite enjoyable, especially in the autumn.

Back up at the top of the cliff, visitors can also pop in to the Ama-no-Iwato shrine to pay their respects to one of Japan’s founding gods. There’s not much here to see beyond the courtyard but the shrine’s ema (prayer plaques) are one of the more colorful I’ve seen. 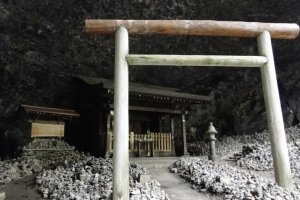 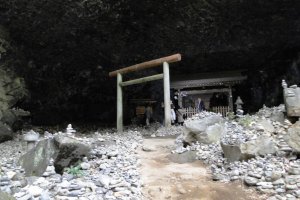 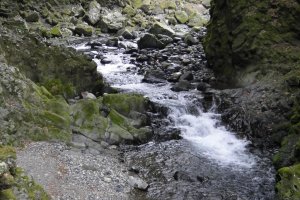 Mandy Bartok Author 8 years ago
Thanks, Bonson. Ethereal or otherworldly were definitely words that kept coming to mind to describe both this site and nearby Takachiho Gorge. Maybe it was the cloudy weather but it gave the region a very mysterious aura!
Reply Show all 0 replies

Bonson Lam 8 years ago
Wow Mandy, thanks for sharing this. What an opportunity to step back into the raw ancient times of myths and legends! It looks very primal.
Reply Show all 0 replies
2 comments in total