Traveling back to the Edo Period

Kiso Valley, or Kisoji, is located in Nagano Prefecture, alongside the mountains of the Japanese Alps. An ancient 70 km trade route called "The Kisoji" was developed along the valley and was very important in commerce, especially from the beginning of the Edo Period. It was important in the formation of the 500 km long Nakasendo - one of the two means of transportation between Edo (Tokyo) and Kyoto. The other transportation route, The Tokaido, ran along the sea shore.

By the shogunate’s restriction, travelers had to make their trips on foot. As a result, "post towns" developed every few kilometers to provide travelers with places to rest, eat and stay over night during their journey. Along the Kiso Valley, a few post towns have been preserved to look as they originally did: Tsumago, Magome and Narai.

During the Edo Period, Narai was located on the half way point between Kyoto and Edo to travelers along the Nakasendo Route. It was the wealthiest post town and was sometimes called "Narai of a Thousand Houses". You can understand this nickname better if you compare Narai to the other towns. The preserved houses stretch on a much longer route in Narai than elsewhere.

Actually, Narai is just one long street that you can walk on. The restored houses of Narai are very similar to each other, but the silhouette of the houses is quite intricate. The atmosphere of the town with no modern buildings and cars takes you back in time, to Edo Period. You can find many different shops there selling, crafts, food, houseware and what not. Also there are some nice places to eat and travel farther.

I visited Narai with my Japanese friends. We found some nice shops selling ceramic and wooden dishes at very reasonable prices. Also, we found a special shop selling clay dolls. Some of his works were exhibited in Tokyo, but that artist had died by the time we visited Narai, and his wife told us that there were nobody to keep that style. That was really sad to hear. We purchased one of the dolls and the lady kindly gave us nice cards.

Next stop was at the food stall where we saw round buns. By that time, we were hungry and we ended up eating buns with various fillings. Their taste and the filling itself, meat or mushrooms, reminded me our traditional Russian pirogi, only the shape was different. The man who cooked them was nice and friendly and had great conversation.

Then we found an antique shop full of all kinds of things. A cat was sitting near the cashier and I was allowed to take a photo. I bought small cups for sake paying just 50 yen for each. My friends bought some useful things, too. So, it was really good "trade route"!

Narai is a station along the JR Chuo Line, 25 minutes south of Shiojiri Station and 20 minutes north of Kiso-Fukushima Station by local train. Limited express trains between Nagoya and Nagano do not stop at Narai Station. You must change to a local train at Shiojiri or Kiso-Fukushima. 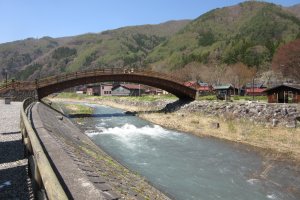 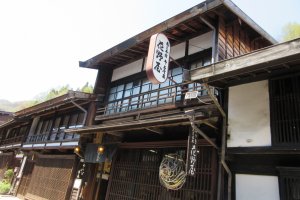 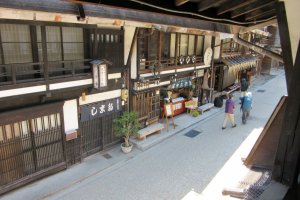 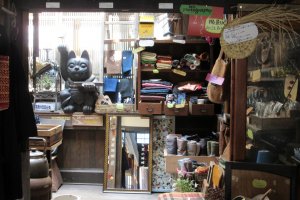 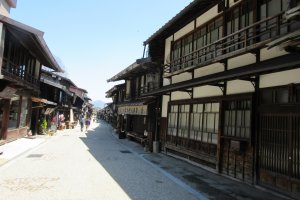 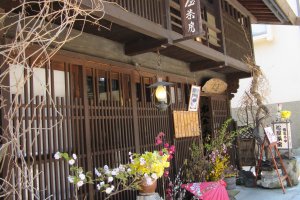