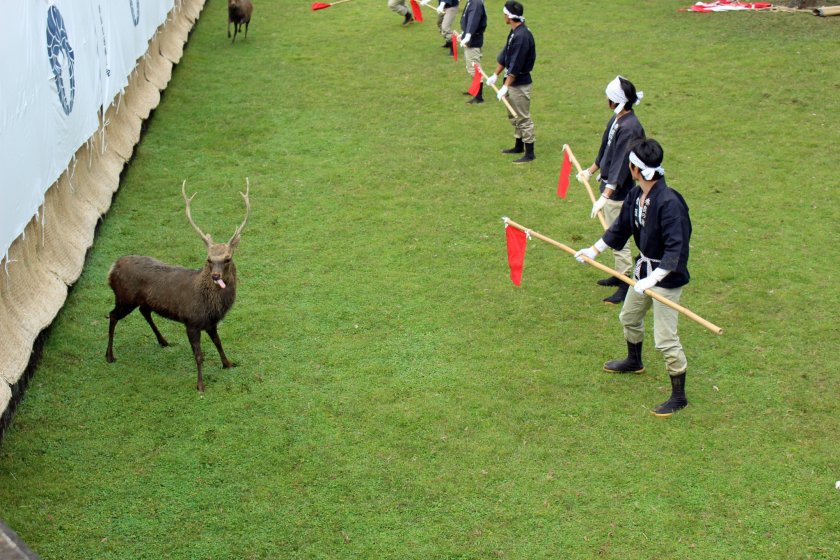 A Nara style rodeo for safety

During the autumn breeding season the buck deer of Nara Park can become quite aggressive. They have been known to charge residents and visitors to Nara alike and butt and stick them with their antlers. They can also cause damage to the park’s trees and to property by rubbing and scratching their antlers against a tree’s bark or against the surface of a building’s wall. To cut down on the number of people being injured the Nara Magistrate began the Shika no Tsunokiri, Deer Antler-Cutting Ceremony, in 1671.

A special facility for conducting the ceremony, known as the Rokuen, was constructed in 1929 and has been used as the ceremony grounds ever since. The Shika no Tsunokiri takes place over the 3-day Sports Day holiday weekend every year. Entry to the Rokuen Ceremony Arena begins at 11:30 and the first of the five daily Antler-Cutting Ceremonies begins at 12 (each ceremony lasts about 30 minutes). Last admission as at 2:30 and the event ends at 3. Admission to the event is ¥1,000.

“Hey! Hey! Hey!” chanted a group of three seko, deer herders, shepherding a trio of buck deer between a line of more seko and the wall of the arena. Many of the seko carried bamboo poles topped with red flags (for their own protection and to better herd the deer) but some carried juji, a cross-shaped bamboo hook with a loop of rope spread over its points. As the deer passed through the tunnel the juji wielding seko attempted to lasso the deer’s antlers with the juji. It’s a rodeo/bull fight for safety, Nara style.

Once the seko had been introduced, the ceremony blessed by priests from Kasuga Shrine and three bucks herded into the Rokuen, the seko went to work. A group of 3 to 5 seko used bamboo poles to herd the bucks into a passage between a line of seko and the wall of the arena. When the deer passed through this tunnel two juji wielding seko attempted to lasso their antlers with a rope. When they succeeded at lassoing a deer three to four seko used the rope and one of two wooden posts in the arena to prevent the buck from moving its head around and subdued it. It’s a difficult and dangerous task, many times the fleeing deer were able to pull the rope out of the seko’s grip or drag them along the ground. The action reminded me of matadors and bull and bucking bronco riding cowboys. I was tempted to yell, “Ride ‘em cowboy,” on the occasion that one deer dragged three seko halfway across the arena after it was lassoed.

While the deer is being captured and subdued, the other seko erect a large cloth banner across the arena to keep the remaining deer away from the seko working to subdue the captured deer (and to prevent them from escaping when the captured deer is released). Once a deer has been subdued it is carried by up to 5 seko to a ceremonial blanket and pillow, provided by a special priest from Kasuga Shrine, known as a Shinkan. The Shinkan gives the deer water to help calm it down and then saws off the antlers. The captured deer is then released back into Nara Park and the ceremony continues until the other two bucks have been captured and de-antlered. The antlers are then presented as an offering to the god of Kasuga Shrine.

I couldn’t help but feel sorry for the deer that were having their antlers cut, but as some unlucky tourists are injured by aggressive bucks every year (including one who was injured elsewhere in Nara Park while the ceremony took place) I understand why Nara conducts this ceremony and additional antler cutting outside of it. A deer’s antlers are made from the same material as a human fingernail. They fall out at the end of every winter and are replaced by new antlers in the spring. At the time of the antler cutting the deer’s antlers are fully grown and cutting them is about the same as clipping one’s nails or a cat’s claws. The deer suffer no ill effects. 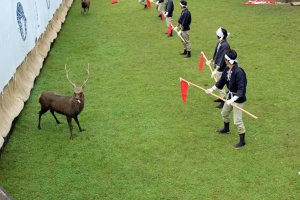 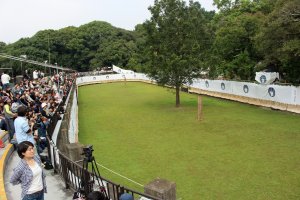 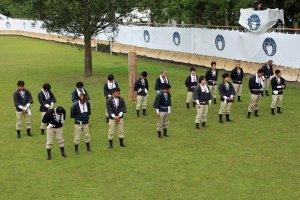 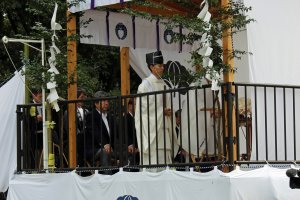 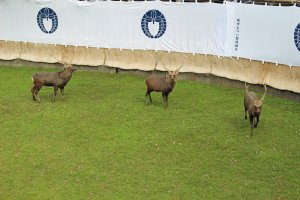 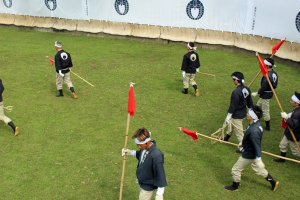 Bryan Baier Author 6 years ago
It was pretty crazy!
Reply
2 comments in total