How's the Skiing and Snowboarding in November?

Ski season in Niigata kicks off toward the end of November each year when Kagura opens. It is a big resort and one of the highest in the region but at the very start of the season there is not much open. If you are desperate to get back on snow for a few turns before winter really arrives it is a good option. If you want lots of different runs you might be better off waiting.

Kagura has a few snowmaking machines, so as long as temperatures are cold enough they can cover one run and guarantee that they will be open at the end of November. This year they opened up on November 22nd (2014) with a 1,500 meter stretch of slope (and there were queues to get to it.) There had been a good early snowfall the week before the opening but not much in the week after. When I headed up there was no snow in the valley and only a smattering on the local peaks.

Getting up to the snow early season takes a bit of patience. You first get the ropeway up from the Mitsumata car park. At the top of this short ride is a bus which drives you along a road through the woods to the Kagura Gondola. We started to see a few patches of snow around here and there at this point. The Kagura Gondola is a long affair (31 pylons in all) that takes you to the slope and the lift that is operating.

There was one four person lift running that gave access to a reasonably long run down. For a weekday we were surprised at the number of people here. The snow was a bit patchy with the odd bit of dirt and bamboo poking through in places, but it was good fun none-the-less. The one run that was open is reasonably steep so it would not be a great choice for a beginner but for anyone with a bit of experience, they will enjoy the run down.

The legs were soon tired after a summer of not doing much and thankfully there is a restaurant open underneath the gondola station. We had a few more runs after lunch and then had to start the long trek back to Mitsumata. When everything is open you can ski all the way back to the carpark, but early season means Kagura Gondola, bus and then Mitsumata Ropeway. (By then though, sitting down was quite welcome.)

A good day out but probably one for the die-hard ski and snowboard fans. 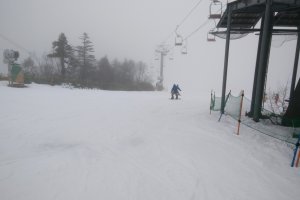 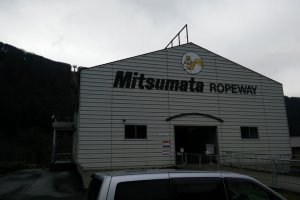 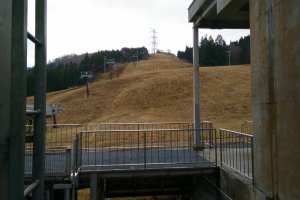 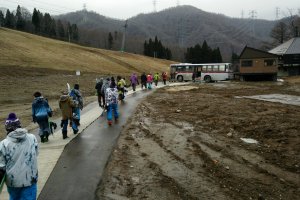 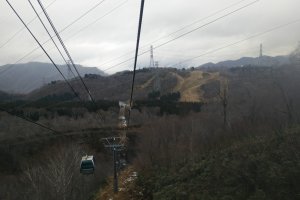 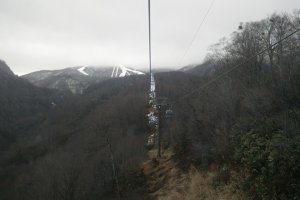