Experience this quirky tradition in Niigata

Japan is known for having some pretty quirky festivals and events (this article covers some of the more popular ones), and there are plenty more where those came from. A staple on the Niigata winter calendar is the Tokamachi muko (son-in-law) throwing event, and it's one unique way to welcome in a new member of the family.

The event takes place on January 15th every year, and involves new husbands being thrown off a 5 meter-high cliff on the grounds of Yakushidou Temple at Matsunoyama Onsen. That may sound a little harsh – dangerous, even – but the area is blanketed with snow which acts like a cushion for the fall. The new husbands are also encouraged to have a few drinks before the throwing happens, with local sake proving to be a popular choice.

Originally, the event was said to be an act of retribution for a man "taking" one of the local women to be their wife, but these days it's seen as a way of wishing a marriage good luck and prosperity.

The throw is scheduled for approximately 2.30pm this year, but do note that can be subject to change.

Tokamachi's Matsunoyama Onsen is around 20 minutes by bus from Matsudai Station, which is served by the Hokuhoku Line.

For those who opt to drive, the venue is around 40 minutes by car from the Shiozawa-Ishiuchi IC on the Kan-Etsu Expressway. 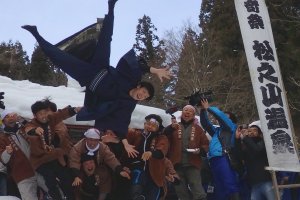 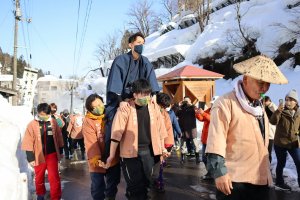 Sleiman Azizi 10 months ago
Only in Japan... :D
Reply Show all 0 replies

Elena Lisina 10 months ago
To throw from 5 meters height is no fun - it's scary! :) I remember, at first I was so scary to jump from 5 meters tall tower in a swimming pool, but I was about 10 y.o. then. A boy pushed me as I hesitated too long, and the second time I was o'k. :))
Reply Show all 3 replies

Elizabeth S 10 months ago
I watched the video of last year's throwing. Maybe in the past it was aggressive but last year, the new son-in-laws got tossed and rolled down the hill.
Reply

Elena Lisina 10 months ago
Rolling in snow is a fun! :D
Reply

Kim Author 10 months ago
Yes, that's a much better way to describe it, I don't think it's unsafe in any way or it would have been banned by now!
Reply

Justin Velgus 10 months ago
Yes, more of this!
Reply Show all 0 replies
6 comments in total