An exhibition of Yoshimura Yoshio

Following the walls of art through the gallery is a bit like following the progression of artistic development in the life of a man. It starts with simple persistent creativity, an urge to express oneself and leave a mark. With Yoshimura Yoshio this expression developed in the form of drawing with a pencil.

The first section of the gallery is made up of 364 daily newspaper pages with Yoshimura's face drawn on them. Every day for a year, starting from the second of January, he drew his face on the daily paper. It's a curious mix of personal artistic moods with a cross reference to the daily news. Some of the drawings are entertainingly creative and others are defiantly dull.

In the pursuit of technical skill Yoshimura came to focus on the aspects of texture and how he could depict the ordinary to be something interesting. One technique he used was creating simple grey scale works with a pencil by filling in tiny squares with letters of the alphabet. The resulting street scenes and ordinary subjects don't blow you away. Instead they draw you in, and it's hard not to marvel at the minuscule details that go into creating a grey scale work that has such depth of texture.

The exhibition leads on and it feels like the artist grows in confidence. Moving on to his next works Yoshimura starts to utilize colour pencils, and it's clear from here on that he really loves flowers. Pieces such as “Cosmos” (2002) yield an extraordinarily detailed scene of wild flowers in bloom. The choice of colour and gradation of texture is incredible, it's hard not to appreciate the technical skill that Yoshimura clearly spent so long developing. With colour in his arsenal now the work of Yoshimura gets big.

Clearly not satisfied with small pieces of art, Yoshimura scales it up to wall-sized canvases. Simply put the biggest of his works are awe-inspiring. Flowers fill the wall and the scale of detail in the pieces is mind-boggling. His latest piece on the wall is incomplete, and it makes for an interesting perspective of how much work goes into the creation. You can still see the little squares he uses to work his way along, drawing flower and leaf one after the other. The tracings of incomplete vines on stark white are a raw reminder that this work is all methodically drawn onto blank canvas by hand.

The gallery is a well-structured exhibition of art, and Yoshimura's drawings were fascinating to be involved in. Yoshimura's exhibition here ends on Sunday the 14th July. The gallery area is in the third and fourth floor of the Setouchi City Museum. The second floor is the city library, and the first is the local government office area. To get to the building catch the Ushimado bus into the marina area and get off at Konura stop. 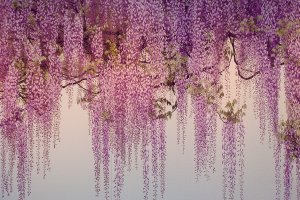 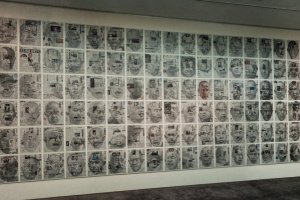 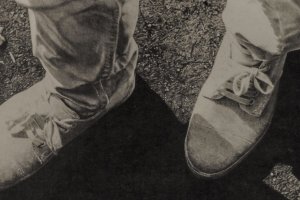 Wouter Thielen 7 years ago
Wow, I can't believe that that picture of someone's shoes is a pencil drawing! Wish I could see the details from up close.
Reply Show all 0 replies
1 comment in total