Japan is acclaimed for its hospitality, so much so that there is a word for it called omotenashi. In Okinawa, you need to be careful with the locals, least they adopt you into their family. Once I was having lunch at a beach shack, and soon struck up a conversation with the grandmother who runs it, telling me that her father, with one leg and one arm, opened the shop fifty years ago and has been working here in this village ever since. It didn’t take me long for the old lady to adopt me into her family, as she kept offering steamed fish and Andagi (Okinawan donuts), saying “eat, eat”, and “free”. She must have thought that I needed the extra nutrition.

Of course, in a large hotel, it is hard for the reception staff to adopt all 300 guests, but at Okinawa Grand Mer Resort, they have come up with the next best thing. Whilst relaxing in their Sylvester chaise lounge and letting my mind wander over the Pacific Ocean outside my balcony, I flipped through their support pack catalogue, with every item imaginable to make you feel at home. Besides phone chargers, transformers and region free DVD players, there is a library of children's books with titles like “The Gigantic Turnip” and “Where’s Anpaman?” For those fighting jet lag, there’s the “Hexagonal Brain Pillow” designed by neurologists to maintain an optimum head height and body temperature. They also stock humidifiers and negative ion air purifiers, but why not just open the balcony door and take in the ocean breezes from the sea. Each of the high rise rooms makes the most of its position on top of the hill overlooking Nakagushuku Bay.

Just over the horizon, the Kuroshio Current brings warmth from the Philippines, sustaining the northernmost coral reef in the world. Further north, it connects with the nutrient rich Oyashio Current from the Russian Far East and the Sakalin Islands. Like the currents which bring fish and trading ships alike, it is a metaphor for the blending of cultures, a maritime Silk Road between Japan and the Eurasian landmass. In nearby Yomitan, some of the techniques and patterns used in its handmade embroidery can be traced back to Myanmar.

Once known as the Nansei, Okinawa embodies the fabled South Sea Islands of Japan. Imagine waking up to a scent that you never thought existed before, or to see mythical creatures that are neither lion nor dog.

The 55 islands of the Okinawa archipelago share the same latitude as Hawaii. Its connection is epitomised by the Aloha shirt, brought to life in 1904 by Chotaro Miyamoto, a Japanese immigrant in Honolulu. Today these shirts are de rigueur as a kind of uniform which are on display at the market stall in the lobby.

Also available is the hotel’s own brand of Amamori, a favourite amongst locals, even though it traces its heritage to Thailand. First made in the 15th century, it predates the first whisky distilleries in Scotland.

Shuna Japanese restaurant on the second floor serves Okinawan specialities like Goya Champaru, the latter word derived from the Indonesian word for “mix”, an apt description for this stir fry of Okinawan and American ingredients. Many visitors come to Okinawa to discover the secret to eternal life (or at least to living well to a hundred), finding it in Okinawan cuisine. With snacks like mi mi ga or pickled pig’s ear, these vinegary delights sound like child’s play. On the other hand, if the thought of nibbling an animal’s ear is beyond your comfort zone, you can try cho mei sou, a salad leaf that resembles rocket leaf in bitterness. These bitter and vinegary foods are elements of gusui nasu, or medicinal foods.

Many employees here have called this island home for several generations, making them a great source of local history and culture. Mariko tells me that American servicemen first started to call the Goya area and Goeku Village "Koza," which then caught on with other people." In the 1960s this was THE center for live music, when Okinawan Rock stars would take over the baton from the jazz bands on the streets in the 1950s. Even today many popular Japanese bands trace their heritage from this area. The All Island Eisa Festival is also held here in September each year. Originally a dance to farewell the spirits of their ancestors, the Okinawan equivalent of All Souls Day features puppeteers, drummers with instruments reminiscent of Noh theater, and dancers with hand gongs and castanets, drawing crowds of over 100,000 people. These days, Eisa is a symbol of the island’s cultural renaissance, and there is no better place to experience it than from Okinawa Grand Mer Resort.

There is a free though infrequent (about 3 or 4 times a day) shuttle bus from the Airport or the American Village to the hotel for staying guests (reservations required), otherwise it is about 60 to 90 minute drive from Naha Airport 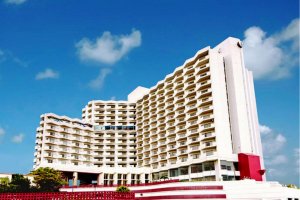 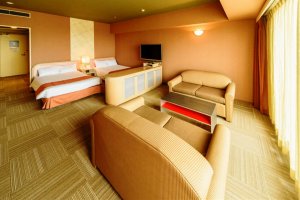 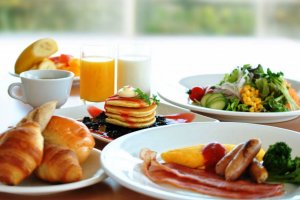 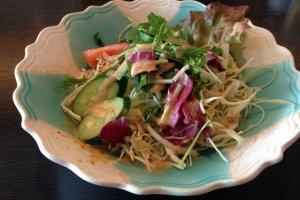 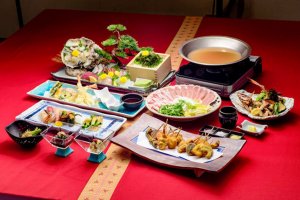 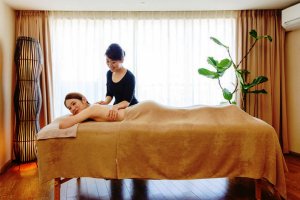 Chris 3 years ago
This place is awesome! They have all you can eat crab legs!
Reply Show all 1 replies

Bonson Lam Author 2 years ago
Wow I didn't know that! I had the Okinawan buffet, but they deliver it to your table. Ate like a King!
Reply

Bonson Lam Author 4 years ago
Yes, one of the best lunch buffets i went to. You order each dish, made to order, but you can have as much as you like. I am going again in February, hope to see in Okinawa one day!
Reply

Andrew 6 years ago
have yet to go there- thanks for sharing!
Reply Show all 1 replies

Bonson Lam Author a year ago
I hope you can visit one day. It is centrally located in Okinawa City, and they have lots of activities as well, from diving to island tours.
Reply
6 comments in total