A fond benefit of taking long road trips is getting to try new restaurants in the area where family and friends live. Living on Okinawa a road trip is usually only about 20-40 kilometers but the distance still opens up the joyful anticipation of experiencing fine food that isn’t available closer to home. Such had become the case for my family when visiting my wife’s family in Itoman City in the far southern part of Okinawa’s main island.

Many of our visits had come to include a lunch or dinner at the Restaurant Joyfull location near the city office. Our children and their nephews and nieces really like the kid’s plates that are served with a toothpick flag of the country where the dish originated; and they really liked refilling on melon soda at the Joy Cafe beverage bar. My wife and I like the food and the bottomless soup self-served from the beverage bar.

It was my delight recently to learn that Restaurant Joyfull is actually a nationwide chain of restaurants in Japan with 10 locations in Okinawa Prefecture. Ironically one is now located near our home and next door to my wife’s former employer in the Awase neighborhood of Okinawa City.

Restaurant Joyfull is like a Japanese version of a 24 hour American style family coffee shop restaurant. It’s open around the clock, has large picture menus, is a gathering spot for families and friends to eat or to just talk while sipping on coffee. The menu leans heavily on hamburger, steak, pasta, noodles, katsu and has a robust selection of desserts.

My family and I ventured out recently to the newish Okinawa City location in Awase to fill up on hamburger steak, noodles and curry, and to rekindle our fondness with this restaurant chain. The first memory to be rekindled was the hand washing station available immediately upon entering the restaurant. Our kids usually need it; at Joyfull washing up is something they do without prompting.

I chose a very basic meal consisting of hamburger steak with savory sauce accompanied with fried potatoes, green beans and corn. I also opted for the add on set of a salad, steamed rice and all I could eat soup bar trips. The soup machine dispenses consume, chowder and corn soup. My favorite by far is corn soup and I had about five coffee cup sized servings during our stay.

My wife chose the Okinawa soba with chicken karaage which didn’t appear to be on the menu but was nonetheless prepared and served to her. The kids both had a kid’s curry plate which curiously was topped with a People’s Republic of China flag. I’m not really sure if the curry served was a Chinese version or if the staff just indiscriminately sticks any toothpick flag into each kids meal.

Restaurant Joyfull has hundreds of restaurants in Japan. It's open 24 hours. Most of the menu is in Japanese only. Kids high chairs, and diaper changers in the restrooms are available. Most meals are priced between 400-900 yen. Beverage and soup bar visits are 200-300 yen extra. 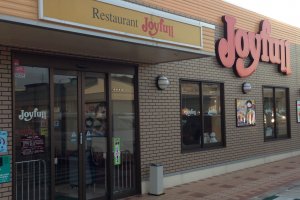 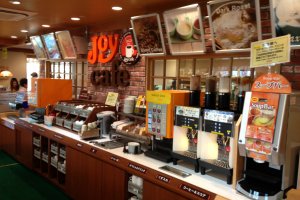 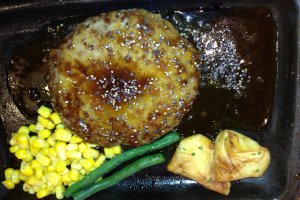