Miyakojima is one of Okinawa's most beautiful islands. Nestled in one of its beaches is a village unlike any other. Tudor style manors and houses with their characteristic white and brown wooden beams cluster around a wide green lawn. It looks like a place lifted straight out of medieval Europe and set down in tropical Okinawa.

More than being a theme park on German culture, this village has historical significance. On July 2, 1873, the German merchant ship R. J. Robertson which was on a trip to Australia via Fukushu China was struck by a typhoon.  The ship finally met its end when it hit a large coral reef on July 11. The local people of Miyakojima braved the rough sea and high waves to save all eight of the ship's crew members. The crew members stayed for over a month before returning to their home country. A monument was erected in gratitude to the kindness and courage of the local people.

First opened in 1987, the village is quiet most days and is a great atypical place to go to if you don't like crowds.  At the center of the village is a replica of Marksburg Castle. The castle houses a museum in the upper floors and its most notable exhibit is a section of the Berlin Wall. On the ground floor, the museum shop sells German beer and pretzels.  You can also rent period clothes and have your photos taken.

Overall, the village is a unique place to take photos. One of the favorite photo spots, particularly for couples, is a natural heart-shaped rock formation by the beach next to the village.

Entrance to the Ueno German Culture Village is free. You will need to buy tickets to view the museum exhibits and participate in the kinderhaus activities. To get there, simply take a taxi or the free shuttle bus going to Hotel Breezebay Marina from Miyakojima's airport. The village is about a 15 minute ride from the airport and is walking distance from Hotel Breezebay Marina. 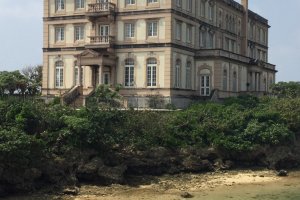