Come for the atmosphere, stay for the nachos

El Pancho isn’t easy to find, considering its status as Osaka’s best and most well-known Mexican restaurant. Located on the 8th floor or a mixed-use building near Shinsaibashi station, there are no signs I could see from street level - only a label inside the rickety lifts that take you up to its entrance. Recommended to me by several travellers from the US, El Pancho is definitely Mexico through an American lens. The décor gave the impression that someone had typed “Mexican” in online and bought everything that came up. The walls, ceiling, and doors are plastered with Mexican flags, sombreros, cacti, chilli peppers, and any other stereotypical object you can imagine. Whether the owner is Mexican or not, this serves to remove any doubt for the mostly non-Mexican clientele as to what kind of restaurant they’re in.

I arrived a little later than peak time but it was still packed at around 9pm. I was asked to move to accommodate a large party, but as I was moved to a more comfortable and better-lit area this was no problem. A cursory glance around and most of the diners are Japanese, but there are plenty of foreigners too (there always seem to be more westerners in a given place since we’re about twice as loud as the average Japanese). I went for the “American” nachos and a chicken quesadilla, ¥740 and ¥840 respectively. The nachos came quickly and were spectacular. I’m sure my Mexican friends could rattle off many shortcomings, but it was the superior of any nacho platter I’ve had in Japan, China, or England. The nachos aren’t too crispy or too limp, and have a great flavour to themselves even before you get all the other ingredients clashing together. You get a decent amount too, and for ¥1260 there’s even a “grande” option if you’re sharing between a few people. Unlike most nacho platters, the toppings here don’t even come close to running out before you finish the nachos themselves. Piled high with cheese, salsa, guacamole and refried beans, these are nachos done right in every way (at least in this white man’s book). I’d devoured the majority of them before I realised I’d forgotten to take a picture, so take my word for it. The quesadilla took a while to arrive, and while it wasn’t anything special, I certainly couldn’t fault it either; plenty of cheese, plenty of chicken, and a healthy serving of refried beans on top. I ordered some extra sour cream to mix up the flavours a bit, which was ¥200. Next time I’ll probably try something more substantial like a burrito or the exciting-sounding “BBQ combo”.

El Pancho is simple, affordable, unpretentious Tex-Mex with no surprises, but in places it really shines as a cut above your standard gimmicky foreign restaurant. The dazzling interior decoration takes some getting used to, but by the end I found it quite endearing. If you like Mexican food and you’re in Osaka, this is the place for you. 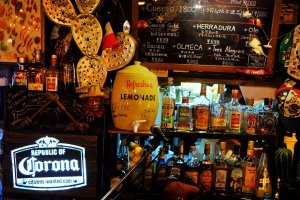 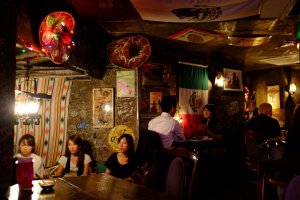 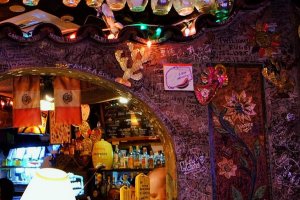 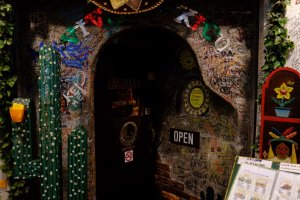 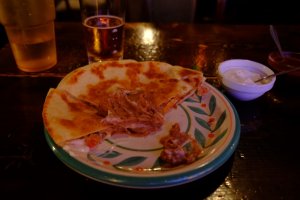 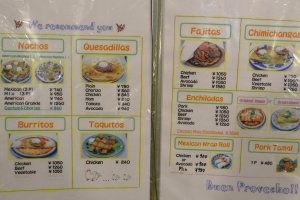 Bonson Lam 4 years ago
I also went to a Mexican place in Shinsaibashi. Great atmosphere.
Reply Show all 0 replies
1 comment in total