Autumn and Christmas Illuminations in the city of water

Osaka Hikari-Renaissance is an annual display that has been held over December since 2003. The program and placements of exhibits change slightly from year to year, though it is always held in the Yodoyabashi area. In 2018, It runs from December 14 to 25.

The main attraction during Christmas in Osaka is the projection mapping light show "Shining Art Wall" at the Nakanoshima Library...

The waterfront of the Nakanoshima River is the star of the show, illuminated brightly with arches, gardens, illuminated cruise boats and characters. The venues are divided into three areas - the Central Venue features the Osaka City Public Hall and Yodoyabashi Bridge light-ups, Starlight City Square, the library's Wall Tapestry, Nakanoshima Illumination Street, concerts and others. The East Venue's main attraction is the Rose Garden with its individually-lit roses. The rainbow Snow Tree is also a sight to see, and the Charity Tree and Charity Heart collect donations for the Japanese Red Cross society. The Snowman Family and the solar power station that powers them are located in the East Venue as well. The Riverside is also considered a venue, with four separate river cruises that you can take. (While watching the riverside attractions one year, I witnessed Santa cruising by on his personal boat!)

While this event isn't a purely Christmas festivity, many of the displays have a Christmas theme. In fact, according to their website, Hikari-Renaissance is “the symbol of Aqua Metropolis Osaka, beaming out the energy of Osaka in 'light' from Nakanoshima.” December is the prime time of year for illumination shows, and Osaka does this one right. You can enjoy a huge selection of festival food in the square (everything from senbei to takoyaki to a chocolate fountain), take in a concert, walk among the arches and roses, pose for a photo in a huge illuminated heart...this is a prime spot for couples, especially on Christmas Eve, but surprisingly it isn't half as packed as the better-known other Kansai light show, the Luminarie, held in Kobe. Each time I visited Hikari-Renaissance there was plenty of space, but as it continues to grow in size I'm certain its popularity will also grow, because this is one December event in Osaka you will not want to miss. 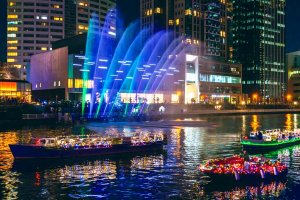 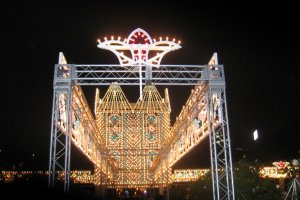 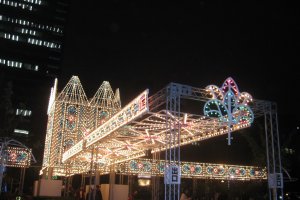