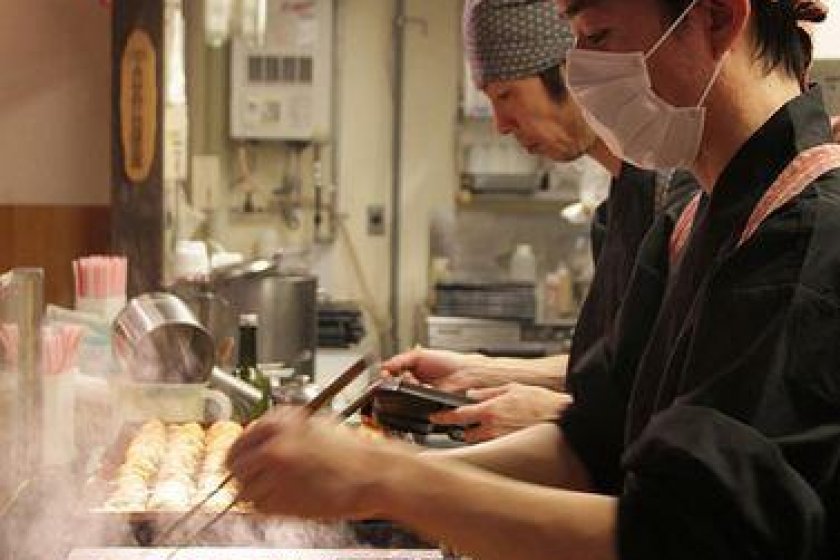 Street food from the Kitchen of Kansai

Half the fun is watching the chefs flip the delicate takoyaki with chopsticks from a special pan. (Photo: Raizel Kiong)

Osaka is famous for many things, but most certainly for its love of food. Osaka locals love to eat the tasty cuisine of the city so much that they sometimes are victims of kuidaore (食い倒れ) or depleting all their resources by an excess of enjoying food. One such treat that is worth your money is takoyaki. Tako is octopus is Japanese. It is pronounced as “taco” in English which results in some funny first conversations between Japanese people and Japan visitors. Yaki means to fry or cook. Fried octopus dumplings originated in Osaka over 75 years ago and have become a favorite across all of Japan. While it is traditionally sold at street stalls, takoyaki can also be found at restaurants and even Kansai's very own Osaka Takoyaki Museum (Takopa)!

Located just outside Osaka’s Universal Studios theme park is Universal City Walk, a collection of shops and restaurants, is a haven for any foodie. Although this place is called a “museum” it is primarily a collection of five takoyaki restaurants. Each restaurant has takoyaki from a different locale in Japan or has their own special way of making the fried dumplings that are topped off with sauce, mayonnaise, or dried fish flakes. All claim to be the best and that is where you as the customer have to make some hard decisions—because not buying takoyaki when you visit is out of the question!

Since restaurants are located directly next to each other and kitchens are right behind the counter, it is easy to see what options each restaurant sells before you buy. The prices are more or less the same so it’s all about quality and taste of the items. A restaurant called Yamachan mixes 10 kinds of fruits and mountain vegetables into their batter then lets it simmer for 4 hours to bring out the flavor. Jyuuhachiban (Number 18) specializes in crisp, crunchy, and creamy dumplings with its milky tempura batter. It is one of the mainstays at the museum and has been there since 1990. Another store with a large red sign compares its takoyaki flavor to American tastes (which have become popular with Japanese youth). As you may expect, these dumplings are loaded with many toppings and a stronger flavor, including the restaurant’s original hand-made mayonnaise. “Kukuru” boasts over 50 stores across Japan. Their fluffy juicy textured dumplings go well with wine or beer. The final eatery is more traditional. It claims to be Aizuya’s (a town near Osaka) original birthplace of takoyaki. The main chef has the biggest smile of the bunch and you can tell he is passionate about his work. Great care goes into the making of each piece of his takoyaki. He makes sure the size is perfect for eating in one bite and the sauce and toppings are laid on such that if you eat by hand your fingers will not become messy. Its menu is the smallest. I found myself splurging for items from three of the restaurants and all were delicious in their own way.

Takoyaki is taken very seriously at the Osaka Takoyaki Museum. It takes great agility and a steady hand to twist the dumplings with chopsticks while they cook on a special pan. Within the museum you’ll find a small shrine dedicated to the deity Ebisu. He is there to send his wishes and spiritual energy into the restaurants to make sure each takoyaki comes out nice, round, and flavorful. A gift shop sells Osaka souvenirs and many things related to octopus or the fried dumplings. 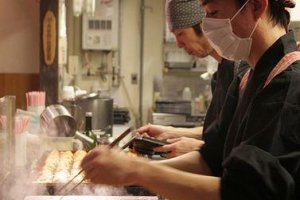 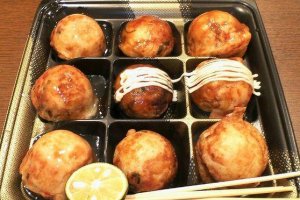 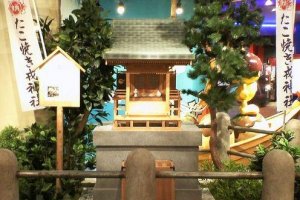 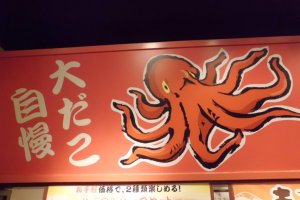 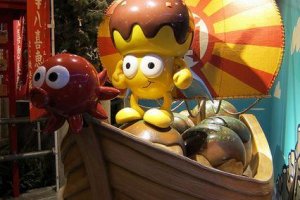 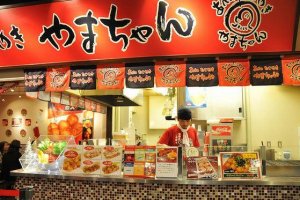